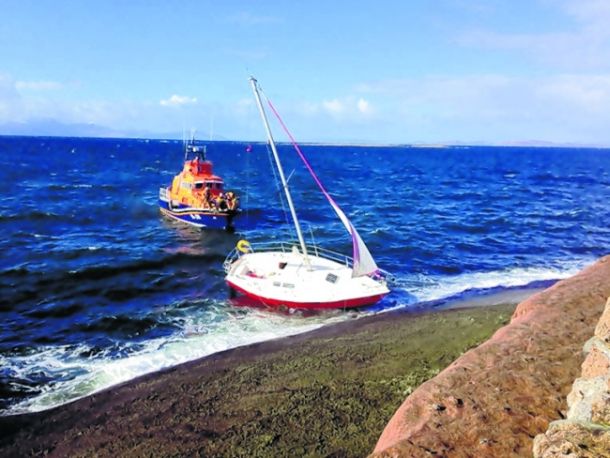 The yacht was recovered later that evening by a professional salvage company organised by the owner. Photo Ardrossan Herald.

A solo yachtsman had a lucky escape on Saturday morning after his vessel ran aground near to Ardrossan Harbour.

The Ardrossan Coastguard Rescue Team was alerted to the incident shortly after 11.30pm when they were paged to reports of a vessel aground near the entrance to Ardrossan Harbour.

The lone sailor successfully managed to make it to safety prior to arrival of the emergency services, however, despite valiant efforts of everyone involved, the 25 foot yacht sank.

A spokesperson for the Ardrossan Coastguard Rescue Team said: “The team was called out just after 11.30pm to reports of a boat on the rocks just south of the entrance to Ardrossan Harbour.

“The team attended immediately and once on scene, quickly established the only person that was on board the vessel was now safely ashore and not requiring any medical assistance.

“The RNLI Lifeboat from Troon was also proceeding to the incident with everyone’s focus turning to saving the stricken vessel, which was taking on water after suffering extensive damage to the hull due to banging off the rocks by the rough incoming tide.