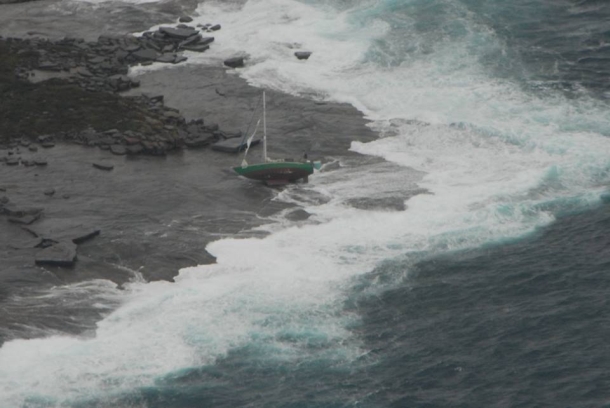 AMSA coordinated the rescue of a solo yachtsman from rocks off the West Australian coast today. Photo AMSA.

AMSA coordinated the rescue of a solo yachtsman from rocks off the West Australian coast on May 5. Peter Cook, aged 68, was sailing his 44ft yacht from Fremantle to Adelaide when bad weather forced him to seek shelter near Middle Island in the Recherche Archipelago.

AMSA responded after detecting a distress beacon about 9am AEST. In bad weather, the yacht had become grounded on rocks near Miles Island, about 125km east of Esperance.

The helicopter from Esperance was able to land on nearby rocks around midday AEDT and the yachtsman climbed on board. The man was uninjured and transported back to Esperance.

Senior Sergeant Richard Moore said rescue crews were able to reach the skipper within hours because he had activated his EPIRB.

“If he didn't have an EPIRB on board there is a good chance he could have died,” he said. “We had no idea where he was. I'm sure his family had some idea he was heading to Port Adelaide but to break your mast in those conditions and then get swept up against rocks is very, very dangerous and could have had dire consequences.

“So that was a good result but yes, when you look at helicopters and $2 million rescue vessels that the Southern Sea Ports have, yes it can be quite costly,” the Senior Sergeant told the ABC.