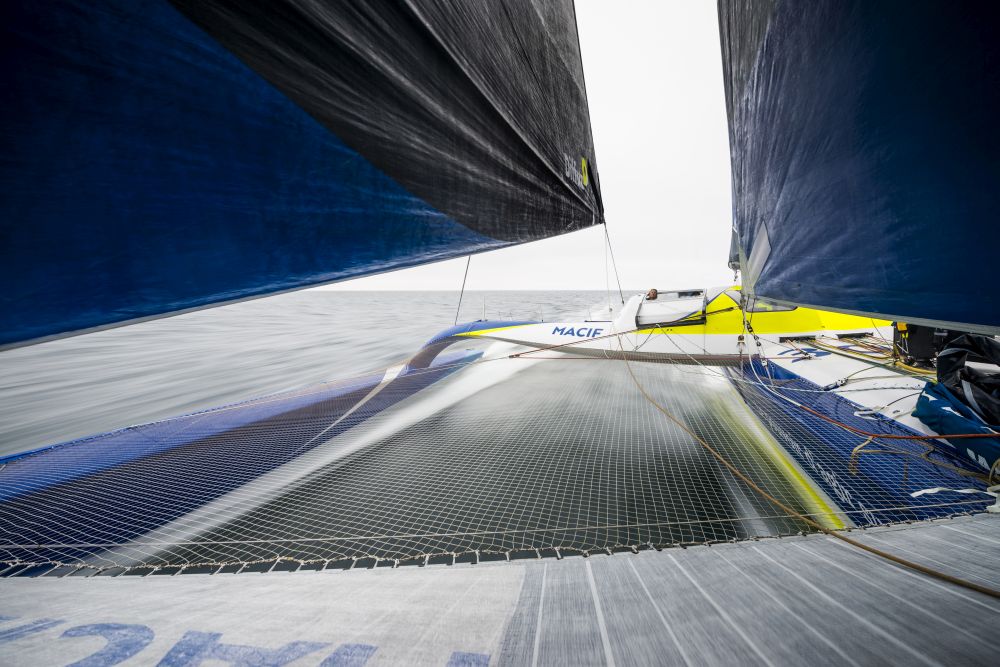 Two days after rounding Cape Horn, François Gabart has met tough wind and sea conditions, off Argentina, that are a severe strain on the boat and the skipper. The picture will gradually change on Wednesday, with a ridge of high-pressure that will enable the MACIF trimaran skipper to concentrate on repairing his J2 furling system again. He hopes to be at the equator next weekend.

This will be the ongoing story of this round the world. Once again, François Gabart must deal with a J2 furling system that has broken due to the repeated impact of waves when the MACIF trimaran enters them at full speed.

“I have never sailed as fast as this in such weather conditions. When you enter a wave at 40 to 45 knots, it causes quite a bit of damage at the bow, and it’s likely to be the chief worry until Ouessant”, the skipper confirmed on Monday.

Already repaired twice, this fixed furling system (contrary to the J1 which can be dismantled and taken into the cockpit) is causing trouble again and preventing François Gabart from rolling his J2 (forward intermediate sail). This is quite an issue in the heavy air to gale conditions he has met since Monday (35 to 45 knots, with gusts at 50) which require the use of the J3, a smaller sail.

With this rough sea and strong winds, there is no question of doing repair jobs at the bow of the central hull. This is why François Gabart is having a stressful time this Tuesday. He will not be able to do anything about the furling system until Wednesday when the weather conditions will ease up.

As is often the case when sailing up the South Atlantic, François Gabart will have a wide variety of weather conditions until he passes the equator, which, “if everything goes well”, he hopes will be next weekend.

“Today, the idea is to leave the area of heavy air I’m in and where I’m being tossed about,” he explained this Tuesday in the weekly radio session organized at the Macif headquarters in Niort, which was short due to the rough weather. “Then I’m going to cross a ridge of high pressure, which means that I will not be sailing very fast as of tomorrow (Wednesday) and I will be able to carry out the repair jobs I’ve planned.

“Afterwards, the goal will be to go and pick up the trade wind and, to achieve this, I will have to slalom for 24 to 36 hours in and out of mildly the stormy low-pressure systems that are forming off Cabo Frio, at the eastern tip of Brazil, resulting in changeable winds. And once I’m in the east to south-east trade wind, I will have a long starboard tack (wind coming from the right, Ed.) until the equator.”

After the extreme conditions of the Great South, in which the skipper and his MACIF trimaran were knocked about, the fatigue of over 31 days at sea is beginning to show, especially since the sea grew deeper on Monday, resulting in hard jolts on board. It is difficult for François Gabart to sleep in these conditions and he admits feeling tired.

“Even though I didn’t have too much manoeuvring to do at the end of the Pacific and I was able to take longer naps, I did not recover quickly enough, like I did before, and this will probably last until the end of the round the world.”

Like his boat, the sailor has also had a few small injuries, in particular one of his fingers. “These are small details that need to be taken care of before they get worse,” he explained. In short, he must now ride out the weather until it gets better.

The key news of the round the world record