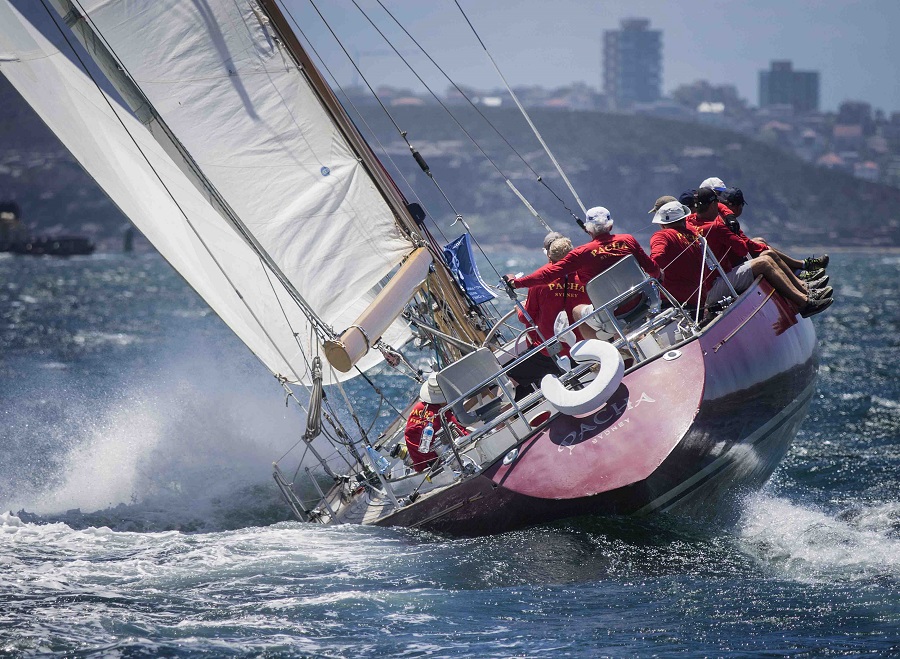 The three-day Australian Admiral’s Cup 50th reunion regatta, with 21 yachts of yesteryear entered, along with the names and faces that came out of the woodwork, was a spectacular success, most sailing and others out to watch – all hoping for a repeat event in the not too distant future.

Royal Sydney hosted the first day’s racing and followed up with a formal dinner at the Club (with the actual Admiral’s Cup on Display) which proved very popular. Bernie Case, who represented at the Admiral’s Cup (A.C.) and other Australian events said: “It was a special night catching up with old crew mates and friends.”

Day 2 was hosted by the Cruising Yacht Club of Australia, which held the famous Admiral’s Cup trophy in a display cabinet, along with memorabilia. The crews packed into the lower bar to catch up and tell stories over a few drinks.

Commodore, John Markos, recreating an old custom, awarded winner Sagacious V with a bottle of Champagne Mumm. The French champagne maker was a sponsor of the Cup for many years and used to award the daily winner his weight in Champagne Mumm. In those years, a few savvy owners weighed themselves down with winch handles and the like; such was their taste for the French bubbles.

Sydney Amateur Sailing Club hosted the final day, including the prize giving, before all took their aching bodies home – many had flown in from overseas and interstate – a big undertaking.

A freshening nor’ easter opened the event, white caps and all. It kept all on their toes and the start was as competitive as ever, resulting in a couple of collisions, the worst between Impetuous and the Gordon Ingate skippered Caprice of Huon (owned by a philosophical David Champtaloup who finished the regatta on Love & War). It ended with a badly broken leg for Charlie Herbert, who had recently recovered from a hip operation. It also meant the retirement of both boats, Caprice coming off worst.

A lot of hurt bodies came ashore that afternoon.  The usual ‘stay and play’ of the sixties, seventies and eighties, was a little shorter than usual. “Yeah, a few aches and pains,” Sagacious V’s Toby Richardson was one of many who admitted that afterwards.

In a close finish, the race was won by Ragamuffin from Love & War (owned and steered by Simon Kurts, but sailed at the Admirals’ Cup by his father Peter) after the latter’s main tore in the last third of the race. Her crew put a reef in, but could not keep pace with the longer Ragamuffin, which Syd Fischer sailed to victory in the tragic Fastnet Race in 1979, cementing Australia’s second Admiral’s Cup win.

Joining Ragamuffin in that 1979 A.C. team were Impetuous, then owned by John Crisp and Graham Lambert, who sailed this regatta on the two’s next version, Impetuous II) and Peter Cantwell’s Police Car.

This particular Ragamuffin was designed by Sparkman & Stephens (the last boat German Frers designed for the company before going out on his own) built by Cec Quilkey (as was Love & War and others) at Taren Point and launched in 1968. She represented Australia at the A.C. in ’69 (was top Aus boat), ‘71 – top boat and won the Fastnet Race (the only Aus boat to do so), and in ’73 after she was altered, when the team finished second.

“It was a great regatta – a lot of old faces and great catch up.  It was a bit much for some – maybe a different format for next time. I know a lot of work went into it, but it was well worth it,” Tony Ellis said.

The short offshore race went to Sagacious V. Gary Appleby was the owner when the team of Sagacious (Swan Premium II), Lou Abrahams’ Ronstan Ultimate Challenge (Swan Premium 1) and Peter Kurts’ Madeline’s Daughter (Swan Premium III) finished third at the Cup. Appleby, who has called Queensland home for years, was aboard for the first race, but out injured for the rest.

Sagacious V, with a few of the originals aboard including Bob Fraser (helm), Phil Morgan, Brad Stephens, Toby Richardson and Greg Johnson, beat Wild Oats/Wild Rose (best known under the ownership of the late Roger Hickman) and Peter Stronach’s Mercedes IV – Stronach and this boat represented at the 1975 Cup with Love & War and John Kahlbetzer’s Bumblebee 3.

Race 3 and the pressure was off a little at the start, because it was a handicap start, with the first boats away at 12pm in a pleasant breeze. Only one small problem – the big hole across the Harbour near Shark Island while the breeze transitioned and a beautiful nor’ easter arrived after a frustrating 15 minutes of pain.

Rod Winton’s Uptown Girl won Race 3 from Greg Maughan’s Syonara and David Salter’s Mister Christian (Peter Kurts’ first boat), with Sir James Hardy seen at the helm over the weekend and looking in better shape than a lot of others.

Under spinnaker and well behind them in Race 3, Salacia II and Love & War were in a race of their own, Salacia II adding a blooper to her spinnaker in her attempts to keep Love & War at bay. She beat Kurts’ boat to the line by four seconds after the pair traded positions a couple of times on the run to a thriller finish.

Kurts, who sailed the ’83 (Once More Dear Friends) and ’85 (Drakes Prayer) Admiral’s Cups with his father, said afterwards: “I enjoyed the regatta immensely – it was a fantastic event. The organisers did an excellent job, so thanks to them.”

Asked whether he would like to do another event of this calibre, Kurts responded laughing: “I’ve got bruises everywhere – we’re all suffering….”

Four arrived via the Manly ferry for the first two days, only one remained on the third day, living up to Kurts’ description of the pain factor.

“I wish we could do this every year,” was a comment frequently heard from competitors.

“I still own Hitchhiker and race her at home in Perth, said Briggs, whose wife Robin joined him in Sydney for the reunion regatta. “I’m still married to the same woman (Robin) too – I keep all the best things from my life,” said a laughing Briggs who also owns classic cars.

Asked about Police Car (later owned by Jim Hardy, who represented at the Cup in ’77 with Runaway) Cantwell, who has resided in Borneo for many years said: “I believe she’s sitting in a paddock somewhere.” Commenting on the regatta, he said: “It’s fun going back in time, isn’t it? It’s all fun – and few drinks ashore.”

Organised by a group led by Peter Shipway, a competitor at eight Admiral’s Cups and aboard one of his rides, Love & War for this regatta.  Thanks too, to those who graciously loaned their boats for Admiral’s Cup races, and those who provided boats allowing A.C. owners, crew and their families to view the races – it was much appreciated.

Cuppers seen at the regatta: