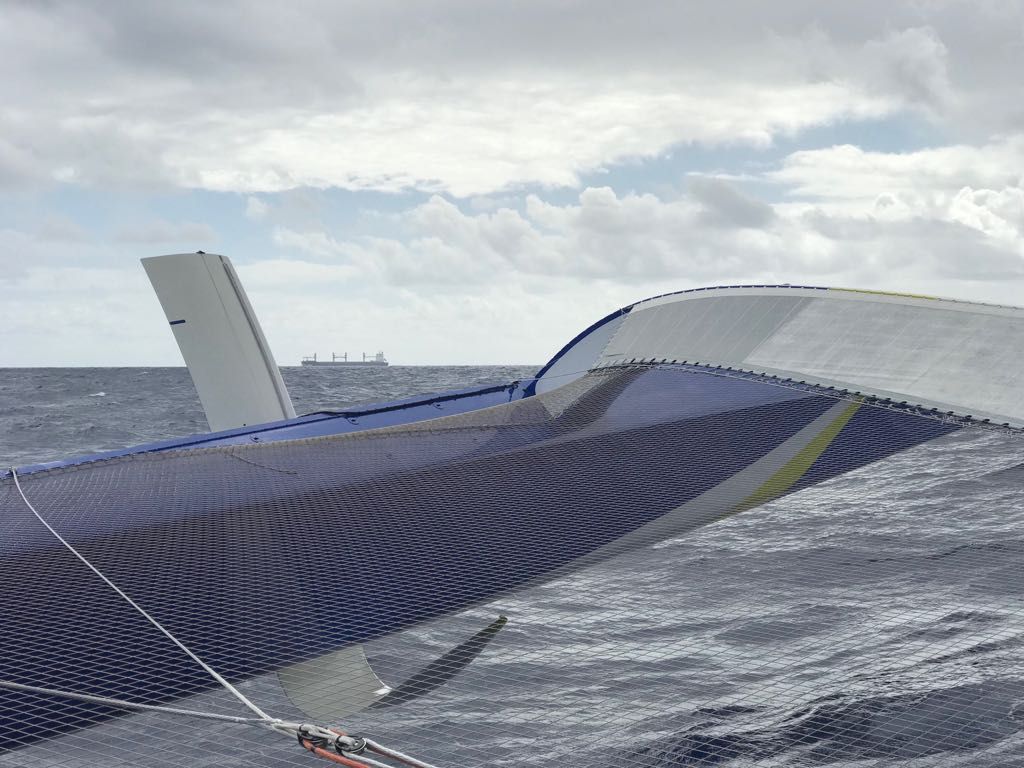 It is almost behind him now! Ocean racers always dread the doldrums as they often mean slowing down suddenly and strong thunderstorms. This intertropical area of convergence only slightly hindered the progress of MACIF, which entered it on Wednesday, and had virtually left it late in the morning on Thursday.

“After a quick run down the North Atlantic, progress has been a little slower since yesterday evening. I had thunderstorms early in the night, and then, I found myself in light air. Fortunately, I met the strong winds when it was still daylight, so it was easier to handle. At the end of the night, the wind picked up. I really thought it was over. I was making speeds of 30 knots, but the wind dropped again and I’m now making progress at 10-12 knots. We have lost a little of the headway we had made, but it will pick up in 3-4 hours, so I can’t complain”, François Gabart said this lunchtime during a radio session organised at the Paris headquarters of Macif with the group’s employees.

Six is the number of days, to a few hours and minutes, that François Gabart must take to cross the Equator, probably on Friday morning. Most likely, the reference time established one year ago by Thomas Coville (5 days 17 hours 11 minutes and 52 seconds) will not be beaten, but as far as the skipper of the MACIF trimaran is concerned the important thing is to achieve his goal of crossing it in roughly six days.

“It was one of the criteria for setting sail. We said that if we had a weather window enabling us to get below the Equator in six days, then it was time to go. I am a little disappointed at not beating the record, especially as I believed it was possible, but that’s life and there’s something bigger and better to follow on from this…”

Admittedly, the MACIF trimaran probably will not be able to add the reference time at the Equator to its record of achievements, but the overall impression of its skipper during the run down the Atlantic confirms that this boat, which reached top speeds of 46 knots, clearly has what it takes to attempt the round the world record. “The boat is capable of extraordinary speeds” he says. At 30 knots, I feel like I’m getting nowhere! We sail at 35-40 knots a lot of the time and I have spent minutes and even hours above 40 knots. That’s 70 km/hr. That’s amazing for a boat! We often talk about flying and there really are many times when nothing touches the water, except the foil. When the boat lifts up from the water and accelerates the sensations are incredible. I’m impatient to experience this again”.

Next Rendezvous Cape of Good Hope

Before even changing to the southern hemisphere Friday morning, François Gabart was already focussed on the days to follow, which are looking favourable: “The really good news, is that for the moment, everything looks like it will follow on well in the South Atlantic as far as South Africa, and this is really important, because this is something you have no control over when you leave”, said the skipper happily, in his radio session with Macif headquarters. In practice what does that mean? “There's a low-pressure area off Argentina which will move to the east and we should be able to recover it to take us as far as South Africa. The weather files I looked at this morning with Jean-Yves Bernot’s routing team gave a sailing time of 6-7 days to the Cape of Good Hope.” On the clock this is about 13 days, when it took Thomas Coville 14.

Health check: all is well!

After less than a week at sea at very high speeds, François Gabart is aware that he has tapped into his physical and mental reserves – such a challenge obviously means pulling out all the stops – but he is very careful about how he sails: “Attempting a record like this obviously pushes you to the limit, but you have to be careful not to reach breaking point beyond which it is difficult to recover. For example, I am slower at some of the manoeuvres than in training, I take the time to warm up and I do them progressively so as not to do any damage to myself”. In the same manner, the MACIF skipper manages his sleep in such a way as to always have a clear mind. “The night before the doldrums, as I knew it was going to be tough, I anticipated this and succeeded in sleeping almost a full night”. A full night on board MACIF? “Over 6 hours in small 20-minute naps. This helped me recover and I needed to, since the following night was a bit harder and didn’t sleep quite so much”