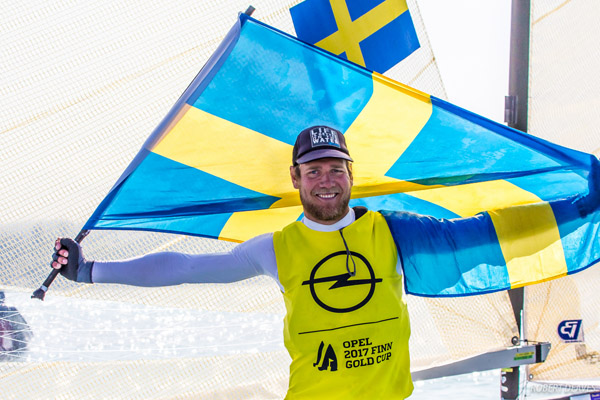 Some of the world’s best Finn sailors are heading to Melbourne this year with Swedish 2017 Finn World Champion Max Salminen to race a world-class Finn fleet at the 2017 Sail Melbourne International Regatta (SMI) to be held out of Royal Brighton Yacht Club from 29 November to 3 December 2017.

With three weeks to go, Salminen is another high-profile addition to the strong line up at Sail Melbourne International, which will also see Australian Sailing Team’s Rio 2016 Olympic Champion and 2017 World Championship silver medallist in the Laser Tom Burton (NSW), 2017 World Championship bronze medallist Matt Wearn (WA) as well as Nacra 17 Olympic silver medallists Jason Waterhouse (NSW and Lisa Darmanin (NSW) and Olympic silver medallists in the 470 Mat Belcher (QLD) and Will Ryan (QLD) compete in Melbourne as the Team prepares for Tokyo 2020.

Finn World Champion Max Salminen will spearhead a high-calibre Finn fleet and is looking forward to his first-time visit to Melbourne and to gain valuable experience at the venue, which will also host the 2019 Finn Gold Cup (Finn Class World Championships).

“Well, I always try to win every race I compete in. But also, we will try to learn some lessons for the future as the Finn Gold Cup, our Worlds, will be in Melbourne in 2019, pretty much the same time as Sail Melbourne. We hope to get some breeze so we can get some hiking in and line up with the fast Aussies. Escaping European winter, I also hope to get a good period of fitness work in both on and off the water,” Salminen said about his goals for his time in Australia.

“I will get to Melbourne a few days before the regatta and head to Sail Sydney after, before I have to go back home to cold Sweden. This will be my first time in Melbourne. In Australia I have only been to Perth before, but I have really enjoyed it, the sailing was amazing and Australia so easy! People speak understandable English and things run pretty much as at home. Joke aside, its very easy to do stuff and to get stuff done,” he said laughing.

Kyle Martin from Canada and Rock Evans from Bermuda complete the international line-up in the Finn fleet. Evans is part of the Finn Class Development Programme (FIDeS) and moved into the Finn just over a year ago. The grandson of 1976 Finn Olympian Howard Lee, has set his ambition to qualify and compete at the 2020 Olympic Games in the Finn.

Salminen, Martin and Evans, who will all also race Sail Sydney (11 – 14 December 2017), were invited to Australia by long time Finn sailor, Olympian and NB Sail Sport’s Rob McMillan as part of his new Finn Academy campaign, which he runs with the help of former Finn World Champion Edward Wright in Sydney. NB Sail Sport will also be the Official On-Site Marine Store of Sail Melbourne 2017.

“It will be great to have Max as the current World Champion come over here to compete at Sail Melbourne along with other international sailors. It adds more depth to the fleet and will ensure a tight week of racing,” Tweddell said.

“I always love sailing in Port Phillip Bay as it offers some of the best sailing conditions in the World. Sail Melbourne has now moved location to Royal Brighton Yacht Club, which is a bit closer to home for me and I can't wait for a great event to kick-start the Australian summer of sailing before we head back to Europe early next year for our Europeans.”

“And as always it will be great to have the Invited classes competing alongside the Olympic classes, giving the chance for the newer generation of sailors to compete at the same time in the same event as their sailing heroes. This is critical for increased participation and to inspire the younger generation, so to have this happening in Australia, and Melbourne in particular is great to see,” Tweddell said about the rare opportunity competitors have in Melbourne to mix it up with world champions and medallists from the last Games on the Port Phillip racetrack.

Sail Melbourne International 2017 offers a full program for Olympic and Invited classes and includes the Inaugural Victorian Foiling Kites State Championships. The combined Olympic and Invited class program offers other competitors the opportunity to compete along side their Olympic heroes and offers an aspirational pathway for up and coming young sailors in the Invited, Junior and Youth classes.

The regatta will be raced in a split format with four days of racing for the Olympic Classes (Wed 29th to Sat 2nd Dec) and three days (Fri 1st to Sun 3rd Dec) for the majority of the Invited Classes.

Online entries can be made here: http://www.sailmelbourne.com.au/online-entry-view-entry

Volunteer registrations can be made here: http://www.sailmelbourne.com.au/volunteer-registration