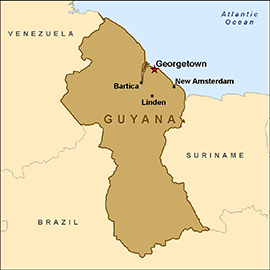 A German man who was sailing from west Africa to the Caribbean island of Trinidad is missing after his yacht washed up in Guyana, officials say.

Axel Verlohr had been sailing aboard the catamaran yacht which authorities found vandalised on northern Guyana's Wakenaam Island on Friday.

Verlohr's sister was able to confirm that the yacht was her brother's based on a German identification card and a note that were found aboard the vessel, maritime officials said.

'According to the woman, he was supposed to be travelling alone from an island off the west coast of Africa to the Republic of Trinidad and Tobago,' Guyana's Maritime Administration (MARAD) said.

'There was no sign of the crew and the vessel was vandalised,' the agency added.