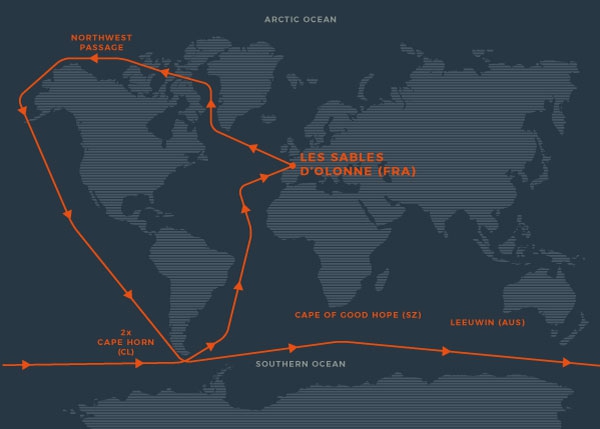 After two years of construction time the Innovation Yachts prototype Open60AAL, the worlds first racing yacht built out of 100% recyclable volcanic fibre, was launched successfully on 16th May in Les Sables d'Olonne, France.

Finally the procedure was working very well. The yacht is floating properly on her designed waterline and the stability of hull and deck is impressive.

All main systems are working properly. The launching is followed by two months of adjustment works of the team and training before Skipper Norbert Sedlacek will depart on 29th July from Les Sables d’Olonne to circumnavigate our planet single-handed, nonstop and without assistance through all oceans, including the Northwest Passage as well as the Arctic Ocean.

After the departure Norbert will set course to the Arctic Ocean, passing the Northwest Passage from east to west and then heading south to pass Cape Horn for the first time. After having rounded Antarctica in the deep south he will pass Cape Horn a second time before heading north back home to Les Sables d’Olonne.

If this record attempt is successful Norbert Sedlacek will be the first sailor ever who did a singlehanded, nonstop circumnavigation without assistance through all oceans including Arctic and Southern Ocean.

This challenge with a length of approximately 34,000 nautical miles is calculated with around 200 lonely, stormy and stressful days at sea through the most dangerous waters of our planet.

For this incredible adventure the shipyard Innovation Yachts has developed and built a special racing yacht based on 100% recyclable and durable materials. This material mix, volcanic fibre with balsa wood core material and harmless epoxy, represents a new generation of very ecological, but also high end quality yachts.

Project ANT ARCTIC LAB is a unique world record attempt. The project will also give an ultimate confirmation about the quality and safety of a new yacht building concept.

Innovation Yachts is an Austrian-French shipyard which is designing and building custom built racing and cruising yachts out of volcanic fiber with balsa wood core. It is focused to use sustainable and recyclable materials as well as taking care about the environment during the construction and afterwards.