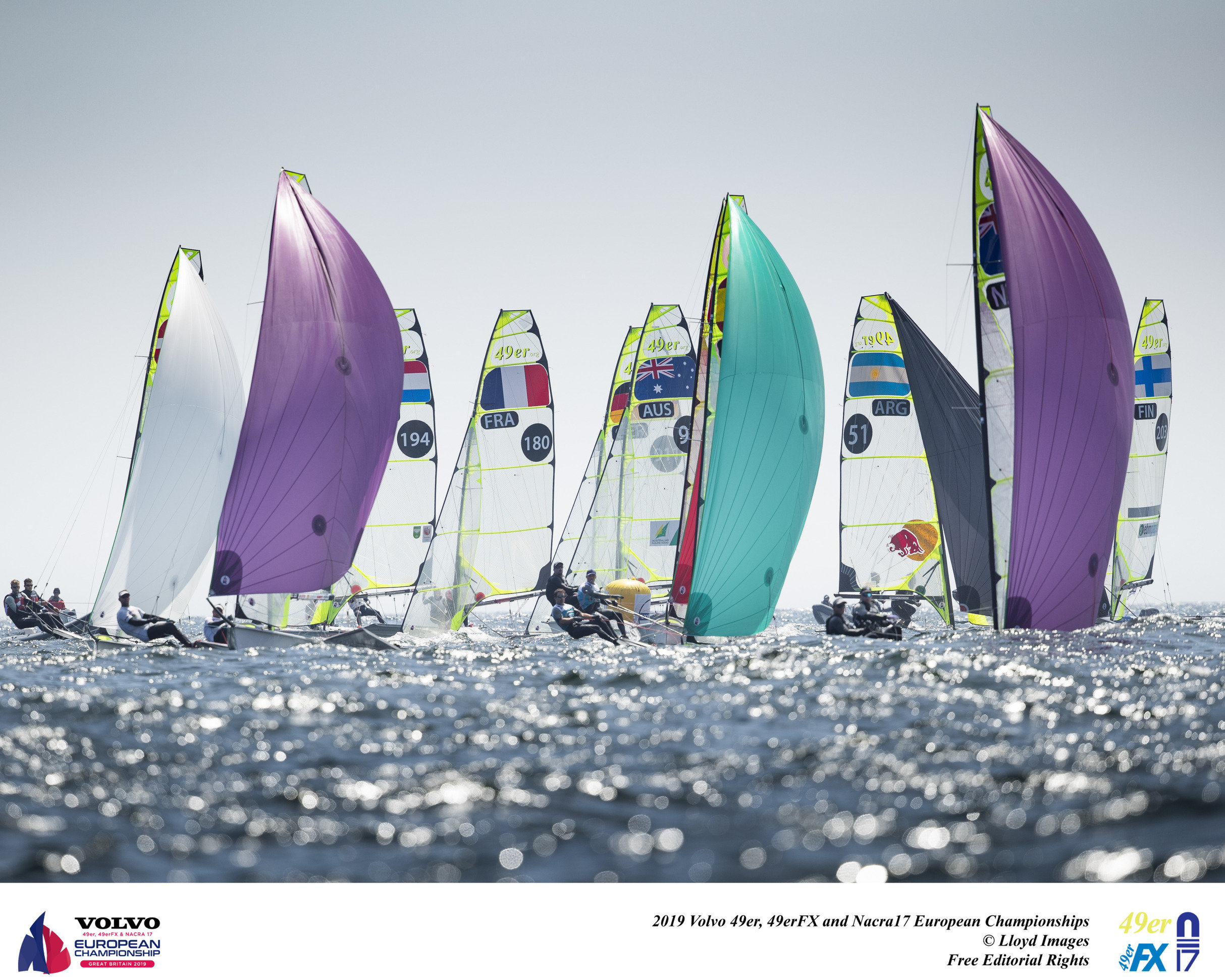 Nacra 17: Who can stop the Italian Job?

The Danes and Argentineans made good moves up the scoreboard on the final day of Nacra 17 qualifying today. Lin Cenholt and CP Lubeck scored 4,1,3 to hold fourth overall, on equal points with the third-placed Italians, Vittorio Bissaro and Maele Frascari. Scoring an equally potent 1,3,4 were Mateo Majdalani and Eugenia Bosco, the Argentineans in 5th overall after three spectacular days and nine races of qualifying.

However, Ruggero Tita and Caterina Banti, edge a little further ahead after scoring 1,2,4, the Italians back to their very best form – the kind of form that saw them dominate the 2018 season. Between the top two Italian crews, the early years of Nacra foiling really have been owned by the ITA boats and, just when the rest of the world thought it might be closing the gap, they’re showing a renewed level of performance. Even though Bissaro and Frascari had scored 3,2,4 from the previous day of windier racing, Frascari said they’re never satisfied. “We didn’t feel our set-up was quite right,” she said, referring not just to the boat but to their mental approach. “You have to have the right mindset to sail these boats fast; you have to be in the moment, and you can’t be scared, or you’re not focusing on the right things.”

The only non-Italian team in a podium position is the second-placed British team of John Gimson and Anna Burnet who believe they’re reaping the rewards of a long winter of training in the Uruguayan summer of the southern hemisphere. “It wasn’t that warm,” said Burnet of her extended trip to Punta del Este, “but we did a lot of sailing in strong wind and big waves with the Uruguayans and Argentineans. They were a lot faster than us downwind in the big stuff, particularly Santi [Lange, the reigning Olympic Champion]. He’s got no fear. It took us a while to work out what they were doing differently, but we’re feeling the benefit of that training this week in the big waves. It’s hard to put your finger on what it is, but it’s partly foil set-up and technique in how you handle the boat.”

When Gimson and Burnet are in sync, there’s barely a word shared between them. “You hear other teams shouting, and actually that works for some of the fast teams,” she said. “But John and I only shout when we’re not quite thinking the same way about the next wave and how to handle it.” The Brits are 5 points behind the Italian leaders and with the top 25 moving forward to the gold fleet racing, they’ll be looking forward to taking the fight to the form team of Tita and Banti.

Meanwhile some big names languish further down the leaderboard, including the four-time World Champions from France, Billy Besson and Marie Riou, who copped a points penalty after failing to take a knife out on the boat for yesterday’s racing, thereby breaking a class safety rule. The French sit in 14th overall, on equal points with Nathan and Haylee Outteridge. The Australian siblings are still learning the ropes in a class that’s quite new to them, and they’re really suffering downwind in the wavy conditions. “We’ve been getting to the windward mark in good shape,” said Nathan, “but we haven’t got a clue downwind. We’ve probably dropped something like 45 points downwind.” It’s not a problem of tactics, strategy or anything other than technique and boatspeed. “When you’ve got boats passing you to windward and to leeward at the same time, you know you’ve got some learning to do!”

The breeze softened a little today, but that just meant the standard of the racing got harder on day 3 of the Europeans in Weymouth. Unlike the previous two days of high-wave action, there was little risk of pitchpoling in the 10 to 12 knot breezes out in Weymouth Bay. But that just put a greater emphasis on good starts, excellent straight-line speed, and catching the best of the subtle changes in the breeze.

Occasionally, getting a bad start and being spat out the back of the fleet was a good thing, as some boats were forced out to what would prove to be the favoured right-hand side of the course. So there were opportunities to make gains during a race.

Today was the day to make it out of the 96-boat qualifying fleet, which has been spread across three flights, and win a ticket into the 25-boat gold fleet. David and Lachy Gilmour won the last major 49er regatta last month in a light-airs Genoa, but in a predominantly windy Weymouth the Aussie brothers have managed just 37th. That’s the measure of depth and talent in this international fleet, which is missing very few of the world’s best.

While Pete Burling and Blair Tuke were unable to match the beautiful consistency of three-bullet Tuesday, solid scores of 9,5,2 keep the reigning Olympic Champions in top spot by a single point from the young Spaniards, Diego Botin and Iago Lopez who scored 1,9,4 in their group. “Today in the lighter winds was harder,” said Lopez. “More tactics, which meant the small things mattered and you had to get them right.” The Spanish come from the most northern, coldest corner of Spain, so they’re not so bothered about the cold easterly winds, although they’re still wearing all their winter sailing gear even in mid-May.

It’s far too soon to suggest that it’s turning into a two-horse race between the Kiwis and Spanish, although they have carved out a useful 10-point buffer back to the third placed Logan Dunning Beck and Oscar Gunn who strung together a 3,8,5 from the day. The New Zealanders are looking very solid, only once dropping outside the top 10 after 10 qualifying heats. Even in the lighter breeze, the Kiwis said it was the same focus for them today: “Just go fast out of the start, keep the speed on and get into the corner in good shape,” said Dunning Beck. The downwinds are proving a lot of fun in the rolling waves, according to Gunn. “You can get a real surf on downwind, but it’s pretty hard knowing if you’re going to cross another boat on a port/starboard.”

The points are all very tight from 3rd to 7th place, now held by James Peters and Fynn Sterritt whose 3,2,1 results were the best of any boat today. The Brits now sit one place and one point behind their rivals for Olympic selection, Dylan Fletcher and Stu Bithell. Every boat in the top 10 has won at least one race during qualifying, but now it’s into gold fleet racing where the margins between success and failure really tighten up. A lead of a few points can vanish in a blink of the eye, and with the breeze set to soften further as the weekend draws closer, a different set of skills could come into play. This regatta is shaping up to become a true all-round test of 49er racing.

Lighter winds in Portland Harbour led to closer racing in the 49erFX fleet for day 3 of the Europeans. The top three boats all had a below-average race out of the three they contested today. The problem for the rest of the fleet is that for the Brazilians, Martine Grael and Kahena Kunze, their ‘below-average’ score was a 6th, which they are now dropping from their results. With nine races of qualifying now complete, the reigning Olympic Champions are counting four race wins, three seconds and one third place.

However, with the top 25 moving through to the gold fleet racing for the coming days, a four-point lead over the second-placed Brits, Charlotte Dobson and Saskia Tidey, really doesn’t amount to much of a buffer. Dobson had a wobble in the middle race, finishing 13th, but she can drop this from her scores. The reigning World Champions, Annemiek Bekkering and Annette Duetz, got better by the race, scoring 6,3,1 and are just one point behind the second-placed Brits.

The Dutch girls are always smiling, despite the pressure of knowing that this is a must-win regatta as the concluding part of their Olympic trials. Their closest rivals for Tokyo 2020, Odile van Aanholt and Marieke Jongens, may have been struggling in the stronger winds of Weymouth (they sit in 18th overall), but their gold medal from last month’s Hempel Sailing World Cup regatta in Genoa puts them in a strong position over the World Champions. Bekkering, while fully aware of the wider implications of success or failure in Weymouth, smiled and said simply: “We are enjoying the racing here, we’re just doing the best we can each day, and we hope to win the European Championships.”

The Olympic silver medallists, Alex Maloney and Molly Meech, had one of the best days on the water with 1,5,2 putting the Kiwis in fourth overall and still well in contention for the overall title. Then it’s a 13-point gap back to the young Swedes – Vilma Bobeck and Malin Tengstrom – who have been tearing up the track in the stronger winds, but who struggled a bit more today. “I think the other crews were still fully stretched, but we were bending the legs a bit today,” said Bobeck, one of the tallest girls in the boat park. “We’d love to have more of the big breeze, but we need to improve in the lighter winds too.” The forecast for Thursday looks like more moderate breeze for Bobeck to stretch her legs, but then it looks set to drop lighter and flukier for the weekend.