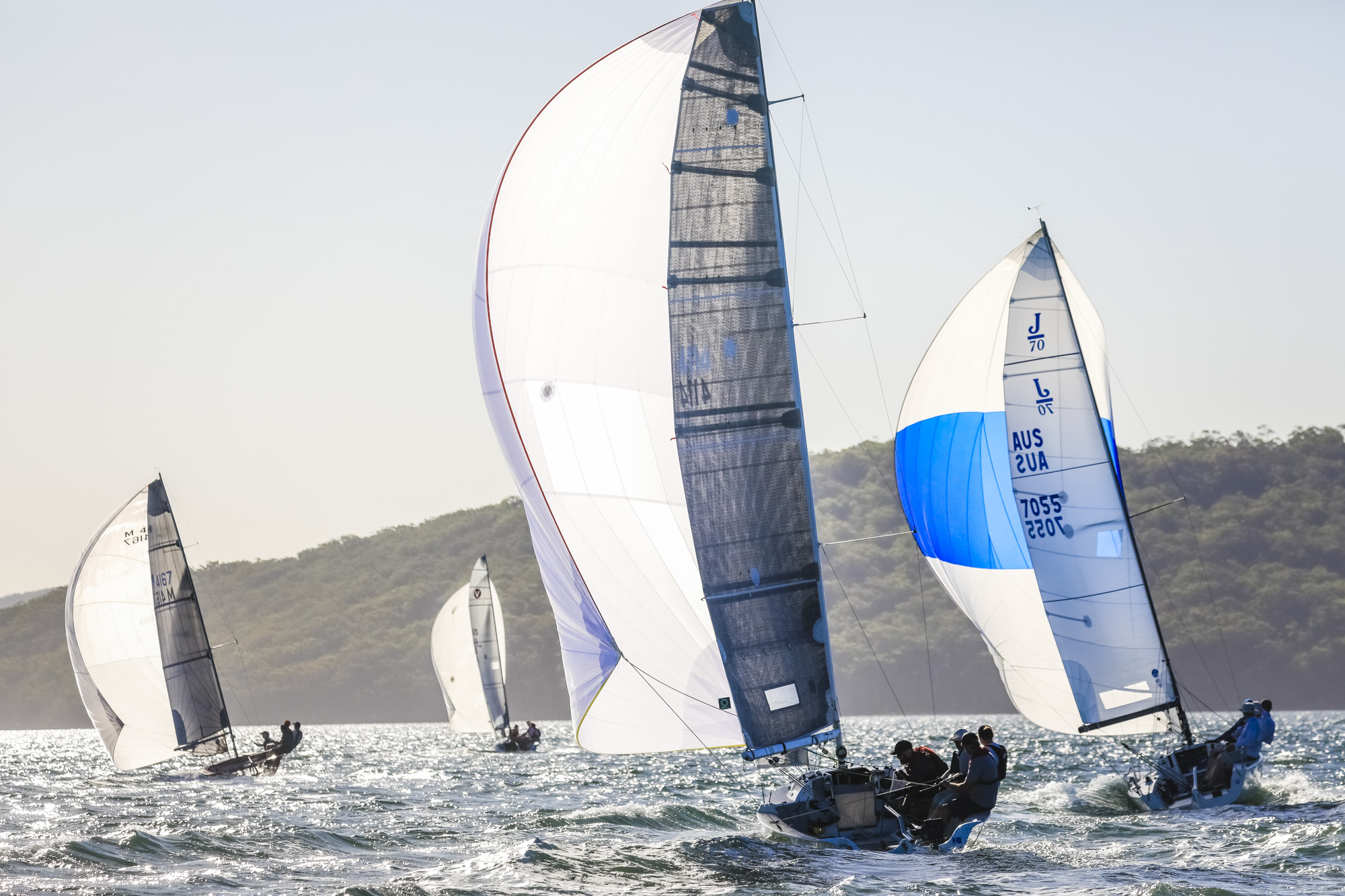 The Super 12 NSW Championship fleet opted for a pair of inshore passage races for their first hit-out at Sail Port Stephens, their numbers swollen to 17 by the late addition of Darryl Hodgkinson’s Carkeek 40, Victoire, and Bob Steel’s Quest from the IRC ranks.

Start 1 was spirited, with parentage aspersions cast as a handful of boats running the line on starboard greeted those making a more direct port start. It was merely the opening scene of a race that had everything, including three boats striking sand and another snagging the bottom mark.

As a westerly made way for a fresher nor’easter there were snakes and ladders all over the course. The leaders ran to within 300 metres of the bottom mark, dropped spinnakers in the new wind line, then popped kites again after rounding the buoy.

Leader Victoire missed the shift, inviting Quest and Farr 400 Vento back into the game. Vento then caught the buoy and lost valuable minutes clearing it from their keel.

Little Nico, Easy Tiger and Ignition all found the shallows on the ensuing reach; a passing ski boat kindly towing Ignition to deeper water. It resulted in a blanket finish as tight as the start, involving six boats.

Handicap honours went the Farr 36 Toy Story, which hadn’t read the drama-filled script. Victoire made amends by winning the second on handicap.

After two races, MC38 Easy Tiger (Chris Way) is leading the way. Division 2 of the Super 12s is also locked up at 3-points apiece to the Melges 32 Tow Truck and modified Mumm 30 Rumbo.

Today was a cracker, weather wise, with clear blue skies and idyllic surrounds presenting a stunning backdrop for day one for the three-day championship. Crews, some of whom have travelled from as far as Brisbane and Melbourne, completed three windward-leeward races in the Salamander Bay area.

The 12-strong fleet relished a north-west breeze of 9 knots as the perfect warm-up for race one. Reo Speedwagon, with its readily identifiable black and blue spinnaker, carved up the race track to take opening line-honours.

In the second race, the breeze shifted slightly more to the west, and competition tightens as crews became familiar with the race track.

Accrewedinterest and Accru inched out Reo Speedwagon to be the first boats round the mark.

The fleet spread out over the rest of the race. Speedwagon gained momentum and found the wind shifts to be first over the line by 30 seconds, followed by Accrewedinterest and Accru another half-minute apart.

Andrew York naturally enjoyed the day, particularly once the breeze kicked: “In the second race the wind died right down as we approached the finish line and it took us a fair while to cross. Luckily the boats behind also got caught.”

In tthe final race there was a change of course as the wind shifted to the north-east, and increased slightly to 11-12 knots. The fleet was relatively contained up to the first mark but dispersed like sheep after that.

There was a minor collision at the top mark, which saw two boats complete a 360. The finishing order was the same as for race two. Adrian Keily, sailing on the J70 James, said there was also a very close call with fellow J70 Juno at the bottom pin, but no damage done.

The fleet is calling Soldiers Point Marina home as it’s handy to the boat ramp and Port Stephens Yacht Club. A passage race is planned for tomorrow, with fresh nor’westers predicted.