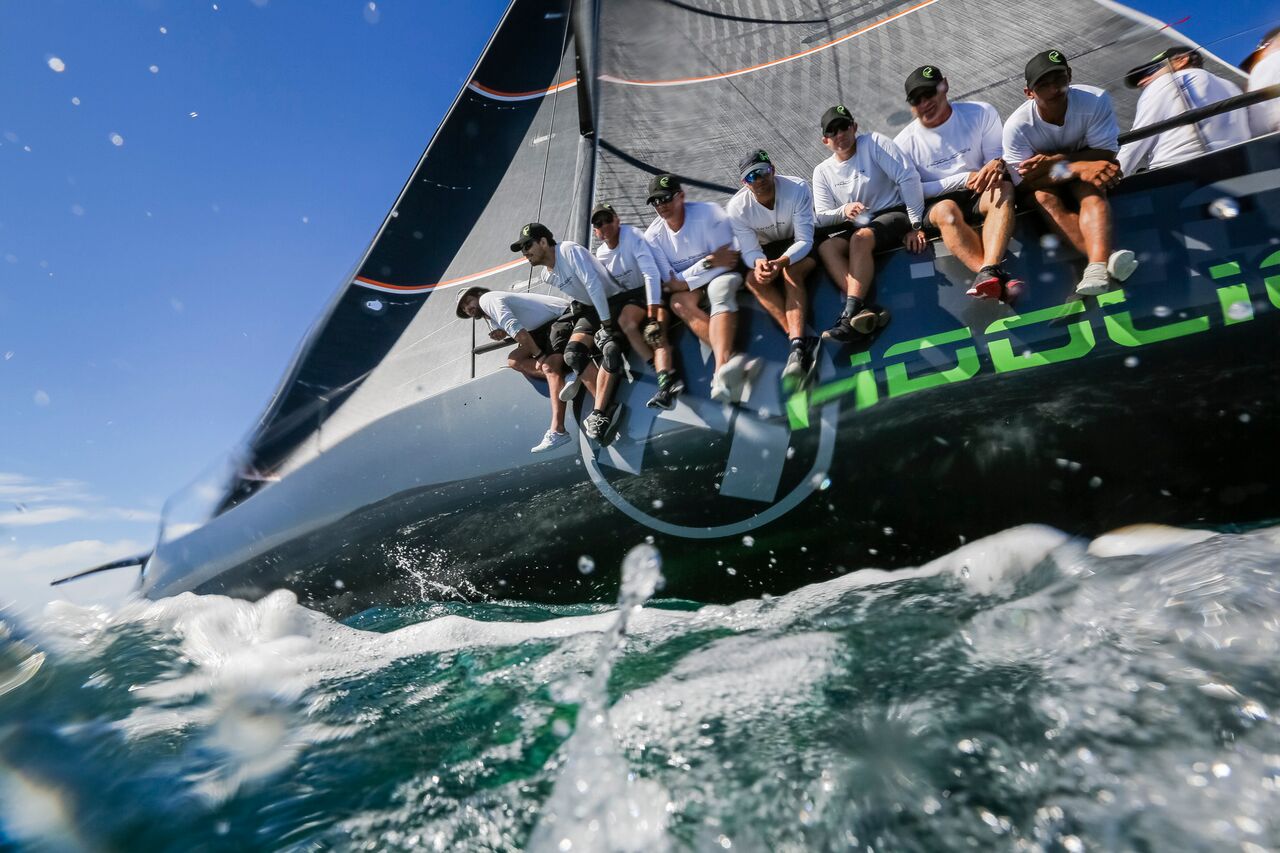 If you like your sailing fast and flat, with uninhabited islands and surfing beaches added for good measure, then Super Saturday of Sail Port Stephens 2018 was as good as it gets.

Fanned by a warm breeze that built to over 20 knots, around 110 yachts across IRC, Super 12, Performance Racing and Performance cruising divisions headed offshore for one of the premier short passage races on Australia’s east coast.

For principal race officer Denis Thompson, that meant picking six different courses across various start times and lines, and ultimately it was the Performance Cruising entry Kayimai that took the honours, not the big boys in IRC and Super 12s.

For the second day of IRC racing, Wild Oats X dominated proceedings, getting out to a good start and extending the lead in the drag race to Broughton Island ahead of a competitive pack.

“We had a great result today, but it reflects the closeness of the regatta that we’re only 1.5 points ahead,” Blackmore said. “We prefer windward-leeward races, but conditions were excellent and we put in some good racing.

“Who knows what could happen tomorrow, but with a couple more races expected for the final day we’re in a pretty comfortable position.”

Tony Kirby’s Patrice is chasing hard, with today’s runner-up result maintaining its second place on the Division 1 leaderboard. Koa clinched a third today, while a fourth placing keeps Celestial in touch with third overall on the standings. Wild Oats X sits in 4th.

“We started off in a light breeze up to the Broughton Island mark, then we reached across slightly sprung. We put our asymmetric spinnaker up coming down to Providence south mark, then carried a kite to the heads,” he said. “It was hard work against the tide coming to the finish but we were happy with how we went.”

With Gerry Hatton’s Mat 12.45, Bushranger, placing second in front of Nine Dragons, the stage is set for a repeat of last year’s division 2 title clash.

“We made the mistake of getting too close to fish farms on the way up to Broughton, giving us further to travel. But we able to remain competitive, and today’s results put us 6 points ahead of Bushranger,” Cox said.

“The highlight was the battle between us, Khaleesi and St Jude, which were working with code zeros, but we were able to hold our own. Tomorrow we just have to be on our game against these new boats and we should be able to win.”

In Performance Racing, the Archambault A32 Esprit, with Manly skipper Greg Wilkins using all his cunning, jumped into the division lead with a first placing today. They beat the Sailors with DisAbilities entry Wot Eva, a TP52 with a 20-foot advantage.

Wilkins credited today’s win to making a clean transition through the Heads. “The wind just swirls around the headland and it was zero to 12 knots and shifting backwards and forwards,” he said. “It was a long reach to the sea mark, but we found a nice 38-footer and rode her wash.

“Once it was back to a work and run we did well. We carried our No.1 light air jib all the way, setting up for the lulls and just feathering when the gusts came through.”

Performance Cruising Division 1 saw a major move today from the X43 Quest 3, jumping from 6th overnight into the division lead with a solid win today over Didi 40 Passion X (David Edmiston) and Port Stephens yacht 51st Project, a Beneteau First 50 with Julian Bell at the helm.

Dennis Cooper’s Amante trails by a solitary point, with a lot to play for tomorrow. L’Esprit is currently equal 3rd overall with divisional line-honours winner Kayimai.

Quest 3 skipper Brendon Gregg: “We had a very good start as windward boat right on the line, and we got good breeze early. We set a code zero then, heading to the north mark, we seemed to be pointing 10 degrees higher than everyone else. We just seemed to have a different line of breeze.”

Gregg is a major fan of the regatta, adding “Once you get around those islands it’s like, kill me now – it doesn’t get any better.”

A Jeanneau hat-trick was the headline story for Performance Cruising Division 2 as the 3200 Sunfast Steadfast held Unruffled and Pinta Bay at bay. The points table, however, sees Newcastle’s Summersalt leading from Steadfast and Sumatra.

A heavy hail storm struck Port Stephens at 5pm and weather models vary for tomorrow’s sailing, with some predicting winds of 25-30 knots. Denis Thompson says no decision on racing will be made until tomorrow.

Meanwhile the Hicko Shield, representing the ‘Spirit of Sail Port Stephens’, was presented tonight to Port Stephens sailor Michael Kirby and crew on She’s The One, who’ve sailed 10 years straight and are regulars at the social functions.

NSW Super 12 Championship
Showtime continued its winning ways at Sail Port Stephens to hold a tentative grip on the NSW Super 12 title with a day to play. The MC38 Easy Tiger, with Rob Brown calling the shots, and the Carkeek 40 Victoire finished 2nd and 3rd respectively today to hold the same podium places overall. Victoire was first over the line from a fast-finishing Little Nico.

Anthony Paterson’s Tow Truck had a well-deserved victory in Division 2 to extend his lead to 3 points over Rumbo, a modified Mumm 30 owned by local oyster farmer Guy Holbert.

The race started with 15 knots of breeze and increased through the day. Reo Speedwagon’s Andrew York admitted, ‘we had a bit on, and at the end it was hard work just trying to keep the boat upright”.

Chris Bland, skipper on the Shaw 650 Star, was third around the first mark and unfortunately fell into a hole from which they couldn’t recover. The boat later capsized just before the finish line due to “operator error”.

The finish was close with five yachts – Accru, Juno, James, Panther and Reo – all in the running to be first over the line. On corrected time, Accru finished in first place, closely followed by Juno with 10 seconds to spare.

Luckily for Heat, helmed by Tyler Ratcliff, they capsized after the finish line. Two boats, DeLorean and Depthcharge Ethel didn’t finish, and Knot Ready retired with a broken halyard.

York is currently in the box seat to win his second consecutive national title, with Juno and Accru in second and third place respectively.