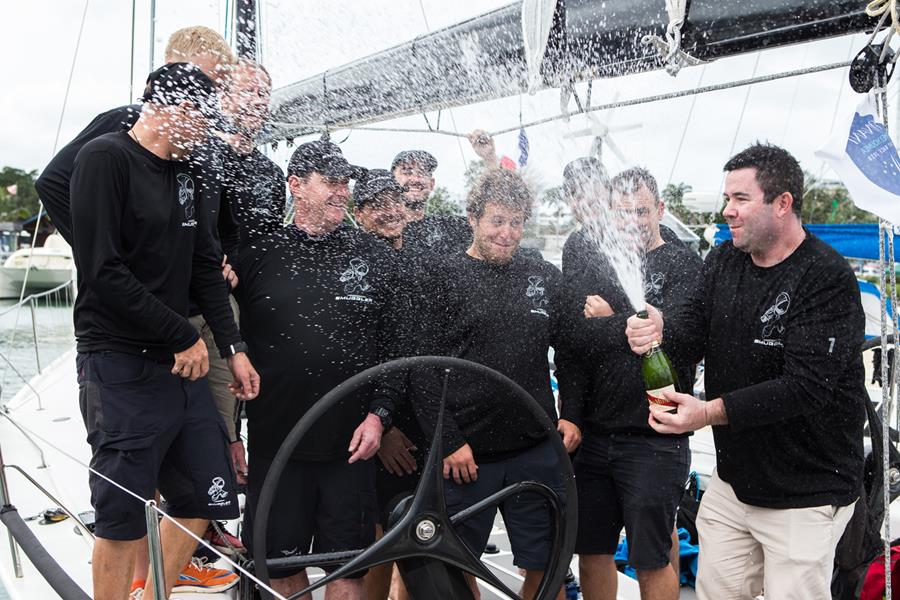 Sebastian Bohm’s Rogers 46 Smuggler is the IRC overall winner of the PONANT Sydney Noumea Yacht Race, the race committee comfortable the Sydney boat can’t be toppled though the majority of the fleet is still to finish the epic ocean passage.

The fast running and reaching race proved ideal for the Rogers design and high-calibre crew.

“We haven’t done a lot of tight reaching in big seas before and the boat handled it perfectly,” said Bohm, who bought the boat in 2015 and named it after the Adelaide band ‘Beat Smugglers’ he used to play in when they supported big music acts like The Black Eyed Peas.

“We were 70 to 80 degrees off the wind, surfing waves and sitting on 14 knots constantly. Our navigator David Van Der Wende made some great tactical decisions and got us as far east as we could, anticipating the big south-easter coming in, and that set us up for a nice angle straight to Noumea.”

On Smuggler’s IRC overall victory Bohm acknowledged: “Everyone’s ecstatic. We worked so hard to get the boat going. We don’t have the biggest budget, we just know it’s a really good boat and we want to show everyone it can win races.”

Rain clouds were the only time Smuggler stalled; a frustrating interruption when the crew knew how close the top four contenders were.

Days of hard-pressed reaching and focusing on the IRC win did take its toll: “By the time you get to day three and four, everyone is tired. You dream then wake up suddenly realising you are on the boat crashing along,” Bohm recalled.

“We had that much water over the deck, it didn’t matter what we shut.. tonnes and tonnes of water got inside the boat,” Ilzhofer described. “You know those videos you watch with the Volvo 70s? It was like that. We are wet to the bone and had to sleep saturated most of the race.”

Those still on the course are revelling in the fresh Coral Sea tradewinds dominant for most of the Cruising Yacht Club of Australia organised 1,064 nautical mile race.