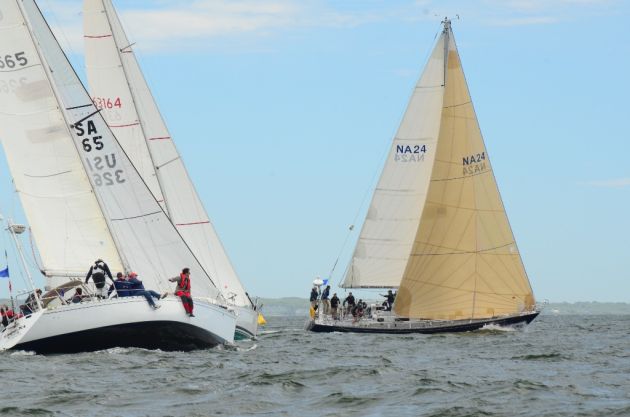 Marion MA- June 11, 2017: Forty-seven boats are enjoying a pleasant sail so far in the Atlantic Ocean near or in the Gulf Stream. They are racing from Marion to Bermuda in the 40th Anniversary of the Marion Bermuda Race.

The scratch [fastest] boat ‘Jambi’, a new Hinckley Bermuda 50 skippered by John Levinson and race veteran ‘Defiance,’ a Swan 56 skippered Peter Noonan, are leading the fleet and were some 300nm from Bermuda doing 6.5kts on Sunday morning. They may reach Bermuda by late Monday but that depends winds in the ‘happy valley’ between the Gulf Stream and Bermuda, especially the last 100 miles to the rock.

Some of the boats behind them are finding calms, the ‘parking lots’, and shifty winds. Wind in the vicinity of the leaders was dropping from 12kts to 5kts and should be swinging from the SW to the NE as they head south. From there, it is variable and light.

Three boats, ‘High Cotton’, ‘Momentum’, and ‘Black Mallard', who had engine problems, returned to ports on the east coast.  There were no reasons given why ‘Momentum’ and ‘High Cotton’ retired.

‘Wind Tango',a Beneteau Oceanis 430 skippered by Ed Redmond, had a problem before the start and returned to Marion for repairs. Skipper Ed Redmond phoned race headquarters from their mobile phone at 18:50 on Saturday. He said that Kingman Yacht Center had replaced a cracked thru hull and they were on their way. Redmond was very pleased by the service of Kingman. At that time ‘Wind Tango’ was headed for Cuttyhunk.

The race officer asked them to confirm that they are still on route for Bermuda and they said that they aren't going to win anything at this point and “are just cruising”. They did not say that they are withdrawing from the race.

Later a caller from 'Wind Tango' reported that they are “officially pulling out of the race”. He said he was “flying to Bermuda tomorrow and “would be attending the dinner”. Their position on the YB screen is back in the harbor at Marion.

In a boat blog Sunday, Jim Putnam on the family crewed Northeast Mk1 38 yawl ‘Faith & Hope’ wrote:
Dawn #2
True Wind: 8 knots/SW
Sea State: 1-3 feet from the south
Wonderful day yesterday. Winds and sea moderating. Warming up. Loving full moon and bright Jupiter. Nik and I on dawn watch with Venus leading the way for the sun. Everyone is having a good time.
We expect to be singing sea chantries today in very light winds.
Yesterday, Asahel [10 years old] surprised Frank and me by reciting the whole poem, Jaberwalky, perfectly when Frank mentioned “gimbal.”
Nik and I are watching a bank of clouds and what may be thunderheads ahead over what must be the major body of the Gulf Stream. We're all looking forward to getting to the Stream and beyond.
The sun just popped up at 5:08 and we were visited by a tern, our first sea bird since leaving the continental shelf. Asahel is joining us for the dawn petrol while the rest sleep.
‘Faith and Hope’… Happy boat,
Jim, Nik, Asahel & Crew

From ‘Hotspur II’, a Columbia 50 sailing by the stars, Ron Wisner wrote:
Day I –
Wonderful to be part of the Start today in Buzzards Bay – always memorable
Nice afternoon sail to Cuttyhunk – steady breeze – calm seas to slight chop
Making the turn  – very exciting – headed for the Gulf Stream
Day II – and the Race Continues
Wind has been very pleasant all day – currently 16 knots –
plenty of sunshine – rolling seas – crew enjoying the sail

Crew-writer Scott Snyder has sent two “Pearls from Oyster”, Paul Hubbard’s ‘Bermuda Oyster’, to the media center at the Royal Hamilton Amateur Dinghy Club, race hosts in Bermuda. Snyder wrote:
All is well onboard, going along well (7-8kt) with our jib top (big reaching jib) and full main in about 15kt of wind.
Heading straight for our stream entry at 38N 69W, then fairly straight to Bermuda, or as best we can as the wind lightens up as we approach.
And later—
Saw a bit of shipping traffic last night, 3 or 4 boats around us now Chowder from the Black Pearl in Newport for lunch today

The race got off to a good on time start with a building southwesterly breeze that was about 8kts for the first start at 12:10 EDT for the slower Class D Boats. Winds built to a sunny 15kts by the time the fastest A Class boats got off at 12:55.