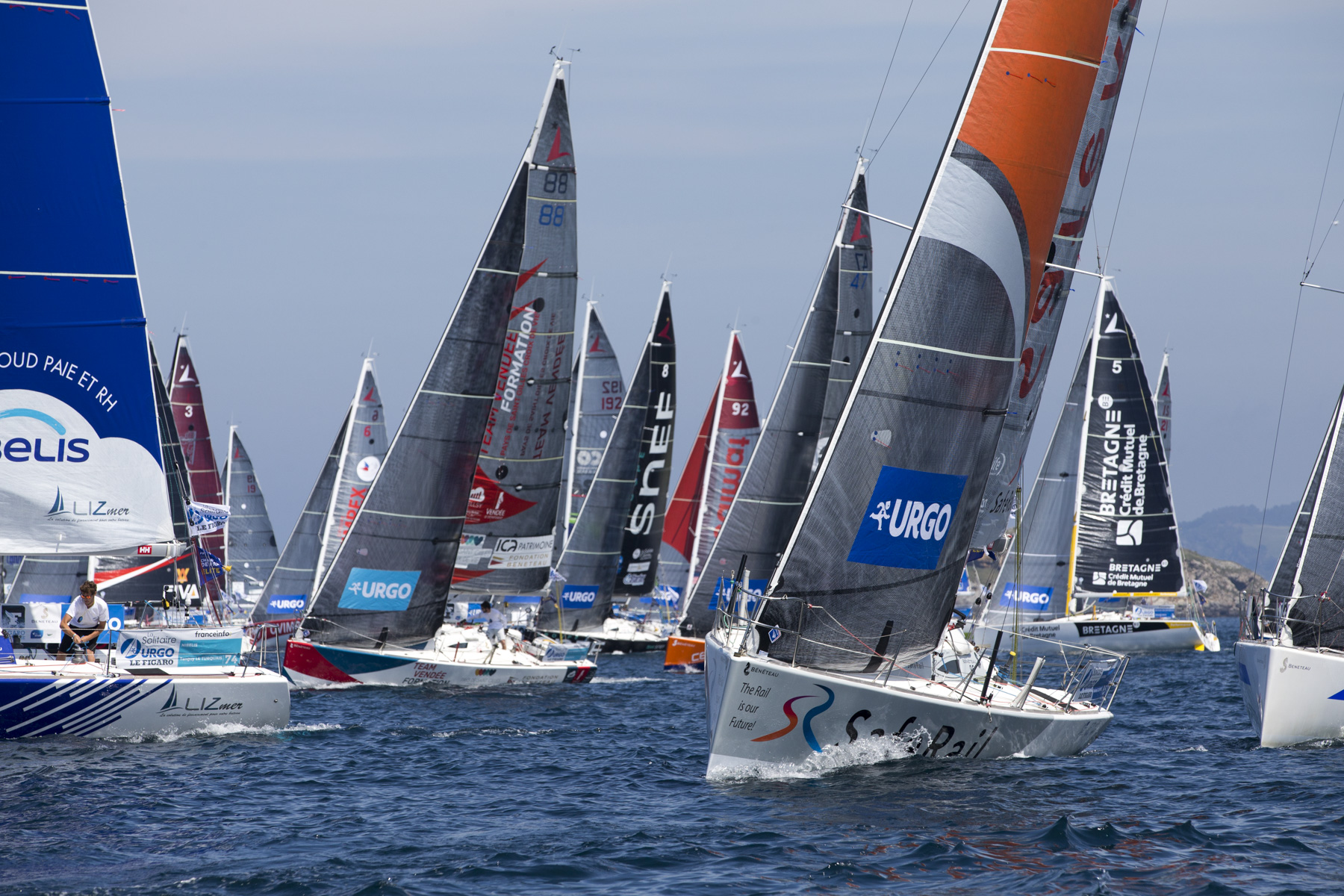 With the fleet eager to get under way in the light breeze, two general recalls delayed proceedings with a final clean start underway at 16:09 local time.

Passing the Radio France Buoy little over an hour after start time Gildas Mahé (Action Against Hunger) leads the fleet with Adrien Hardy in 2nd and Pierre Leboucher in 3rd. The fleet are set to have a slow night working their way northwards in a light northerly breeze averaging speeds of 5-6kts.

Speaking before the start Adrien Hardy, (Agir Recouvrement) currently in 2nd position summed up the conditions the sailors are expecting: “On the water within 100m there will be areas with 3 knots of wind or 6 knots, and that can make a big difference to 100 meters! It will be necessary to observe the water, not to have preconceived ideas on the overall strategy.”

Sébastien Simon, (Bretagne Crédit Mutuel Performance), 3rd “The weather is completely undecided. In the end, we will suffer a little bit what is going to happen. I told myself that I would take what was going to happen.

There will be plenty of play and it will be necessary to know how to advance his boat in the swell and little wind. I think some people will try things.”

Turning their focus back to the Bay of Biscay and the offshore crossing British sailing and top ranked amateur after leg 1 Hugh Brayshaw (Offshore Academy) was looking forward to Leg 2.

“I have done a good amount of resting and eating so I’m fresh for leg 2 – I’m definitely looking forward to a less physical leg but it’ll be tactical and tricky. I certainly like the heavy winds and a fast leg but the light winds bring in a more tactical approach and which decisions to make.

“This is my second year and it’s very exciting competing against some of the best solo sailors in the World who have returned to the Figaro from last year’s Vendee Globe.”

Alan Roberts (Seacat Services) commented: “Luckily I didn’t have too much damage after leg 1, I have spent the time here in Gijon resting and repairing myself and the boat, we are in great shape for the start of leg 2! It’s a very light forecast for today’s start – but I’m hoping to get away cleanly and post a good result.”

Mary Rook (Inspire+) said: “I’m actually looking forward to this leg a lot more than the last leg – the weather should be a bit kinder for us however the forecast does look quite complex negotiating a ridge of pressure and a number of wind shifts once we get to the north of the Bay of Biscay.”

On her fellow competitors Rook commented “This year is really tough, the top 20 teams are made up of some of the best solo sailors in the World who have returned from campaigns such as the Vendee Glove and so to be up there playing with them is definitely the goal.”

After negotiating the departure from Gijon and navigating around the Radio France Buoy the fleet will begin to work their way northwards, splits in the fleet could show with options of going north east before a carefully timed tack back towards the Chausee de Sein turning mark in the north west corner of Biscay.