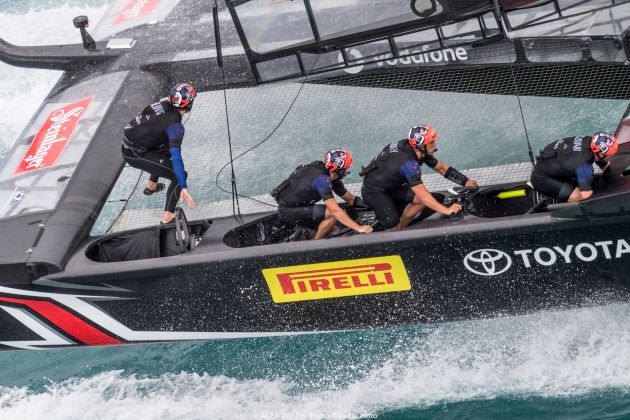 It was another fascinating day of racing in the 35th America's Cup Challenger Finals in Bermuda today. Choice of daggerboards, problems with boats and unforced errors all added to the drama.

Coming into the day with a 3-1 deficit after his “swim” yesterday, Nathan Outteridge needed everything to go in favour of Artemis Racing if he was to claw back the margin on Peter Burling and the Kiwis. Initially it seemed that, with a choice of a higher wind daggerboard than New Zealand, the Swedish team might be on the right track. The wind was predicted to be below 15 knots but it started on the high side of that.

Outteridge has been winning the starts and today was no exception. In the first race he dropped in front, took the superior windward position, broke the overlap with better speed and swept around the reach mark at 45 knots.

Initially covering on the beat, with 800 metres to the top gate the Swedes let New Zealand escape but still had a 10 second lead, which they turned into 20 seconds after another scintillating run down the course. The Kiwis had a slight edge in VMG on the beats, pointing a little higher at the same boat speed. An unforced error in a tack saw Artemis porpoise and dip their bows, allowing the Kiwis to get very close again, but the downwind advantage removed any danger and it was comfortable 15 second win. The scores were tied at 2-2.

Before the second race there was activity on the Kiwi boat, with shore crew working in one of the cycling pods. But all was cleared away in time.

We were treated to another Outteridge clinic in the pre-start when he set up underneath the Kiwis, bore away to get speed at the gun and then forced Burling away from the reach mark. Able to decide when to ease off and run for the mark, the Swedes again left the Kiwis in their wake at the beginning of the run and held a 16 second advantage.

Again the Kiwis looked better on the beat, especially with the wind fading towards the top mark. The boats came together, Burling went for a luff and Artemis was forced to tack away – and it wasn't a good one. Again, an error on the Swedish boat had handed control back to their rivals.

The wind was now down to 11 knots and the Kiwis' bigger foils were staring to work. At the bottom gate the margin was 18 seconds and the New Zealanders increased the lead significantly as Artemis suffered problems with their daggerboard controls. Eventually they decided they needed to get the matter sorted out before the third race and they radioed their retirement. The Kiwis were ahead again, 3-2.

The wind had built a little by the start of the third race and both crews had swapped in two new grinders, testimony to the physical exertion required in these very technical boats.

Again Outteridge dominated his old rival. He approached at speed, dropped in front and despite an appeal to the umpires by Burling, was allowed to take position to leeward, forcing the Kiwis wide of the reach mark again.

Peeling away first and using his downwind speed advantage, Outteridge was 90 metres in front at the bottom gate.

Again the Kiwis were superior upwind but coming in on starboard, Outteridge went for a big dial-down and the Kiwis lost a lot of ground when they had to dip significantly to avoid a penalty. They recovered quickly and closed the margin at the gate.

This time the Kiwis got the better of the downwind when a big shift favoured their side of the course. They led by 100 metres at one stage but Artemis closed at the gate and followed them around, right on their transom.

The Kiwi VMG superiority showed on the second beat and they pulled away to a 16 second lead. With the race seemingly in the bag, another unforced error, this time on the New Zealand boat, almost turned the race on its ear. As they sped towards the finish, a bad final gybe put the boat in the water and Artemis was heading for the left-hand mark at speed.

It looked as though the Kiwis might try to block their path and Outteridge pushed the protest button but there was enough residual speed for Burling to back off and get over the line first, with no penalty.

So the score became 4-2 with New Zealand needing just one win tomorrow to earn the right to face Oracle in the Cup.

“We saw in the semi finals that anything is possible,” Outteridge said. “We’ll keep chipping away. We won’t change how we tackle the starts or the first mark approaches. We’re six for six there. It’s more what we do in the upwind legs to help keep them behind us…

“The boat’s going just fine. I think if we can keep attacking the races the way we have been, and (keep) trying to control Team New Zealand as much as we can that’s the important thing for us to focus on.”

Overnight, Burling will be studying video of the start sequence and Artemis will be working on their general boat handling and tactics to eliminate the unforced errors that cruelled them today.