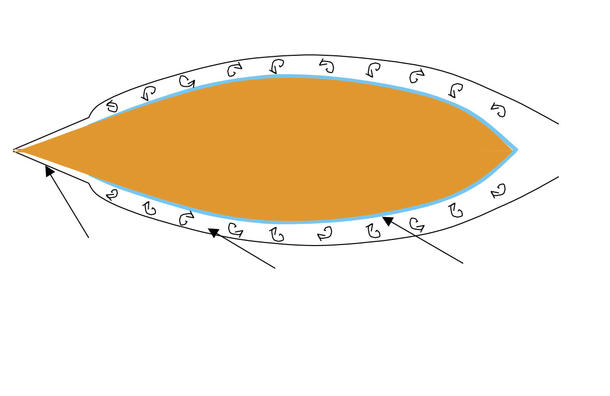 A smooth underwater finish will reduce drag, increase speed and improve fuel consumption.
Is the bottom of your boat smooth enough?

If you get a group of five sailors to sit around the table with a jug of beer to decide on how smooth the underwater part of their boat should be, you can be confident of getting at least six different answers. How important is it? What is happening to the water as it flows over the hull? What about the latest non-stick technology, or whether to wax the surface? Aren’t dolphin skins supposed to be the best surface of all? Here you will find answers to those questions, using a bit of science and just a few facts.

A few preliminaries first, just to set the scene. We are talking about frictional drag here, which is just one of the many sources of drag that slows your boat down. Other types of drag include wave-making drag and trim drag.

The effect is analogous to taking a pack of playing cards and throwing them onto a table. The table is the equivalent of your hull and the cards are the layers of water moving past it. Each card sticks a bit to the next one. The layers of water next to the hull that are affected by the hull moving forwards is called the boundary layer (Figure 1). It is very thin, less than 50 millimetres in most circumstances, so it is not readily visible unless you are really looking for it. However, it is this boundary layer of water and what goes on inside it, that is the key to understanding how the hull surface roughness affects the performance of your boat.

Laminar flow has much less drag than turbulent flow but it only exists on really smooth surfaces, at slow boat speeds at short distances from the bow or leading edge of the keel, in calm water. In other words we can just about forget entirely about laminar flow except for the keels of a few, very well-cared for, racing yachts. Even then it will only be laminar when you are not sailing in waves. To quote America’s Cup designer Dave Pedrick “we’ve used electronic sensors and microphones to test for laminar flow. You can get some, but not much”. So let’s concentrate on turbulent flow.

Inside this thin boundary layer of turbulent flow there is an even thinner layer of water called the sub-layer, scientists can be an unimaginative bunch at times. The sub-layer is really thin, typically less than 0.1mm or the thickness of a human hair. It is difficult to imagine that this wafer-thin layer of water is so influential but it is.

If the roughness of the hull surface is high enough to protrude through the sub-layer, it will cause an increase in frictional drag, i.e. slow you down. The more it protrudes, the more the friction. If the roughness is less than the sub-layer thickness, you have what is known as a hydraulically smooth surface and making the surface any smoother will not reduce the drag further, no matter how much sanding you do (Figure 2).

A typical brush-painted finish is about three times rougher than typical sub-layer thickness. As a guide, using 360 grade sandpaper will usually get you a hydraulically smooth surface. This does not mean that if you give the hull a going over with 360 grade, you will have a hydraulically smooth surface. You have to work steadily through the various grades from rough to smooth. It is however a law of diminishing returns, so we need to know whether the effort in sanding the hull is better used practicing sailing, or working to pay for more fuel.

The benefits of a smooth bottom should now be clear!

Finally, lets examine a few bar-stool philosophies. First, if your underwater finish allows water droplets to bead rather than pool, is this a low friction surface?

Beading of water droplets has nothing to do with water friction; it is a surface tension effect. Products that encourage beading are unlikely to make the surface smoother, however, they might discourage marine growth from sticking to the hull, so in that sense they may reduce hull roughness.

Second, is waxing a hull going to reduce drag? No for similar reasons, the wax is probably going to introduce small lumps to the surface and it will attract dirt. Remember we are trying to get roughness down to less than the thickness of a human hair.

Third, what about the dolphin-skin concept? It is true that dolphins have less drag than an object of that shape should have. Their skin is soft and flexible, allowing it to absorb some of the turbulence in the boundary layer over the dolphin, so there is more laminar flow over the dolphin hence less drag associated with it. Researchers have been investigating dolphin-skin surfaces, called compliant surfaces, for about 30 years, but are not yet able to apply the technology to yachts.

What about sanding down a gelcoat finished, underwater hull surface? Well, you get the same friction reduction as with any other surface, but you will increase the porosity of the gel coat, increasing the likelihood of water absorption and hull laminate breakdown. Does not sound like a good idea to me; better to put a paint system on, then rub that down.

Finally, what about the various antifouling finishes now available? In essence the same principle applies: the paint system that gives you the smoothest finish has the least drag. It is how that level of smoothness is achieved that distinguishes the different options: self-polishing, sandable, easy-clean non-stick etc. and that is a whole new can of worms (pardon the pun) best left for another time.