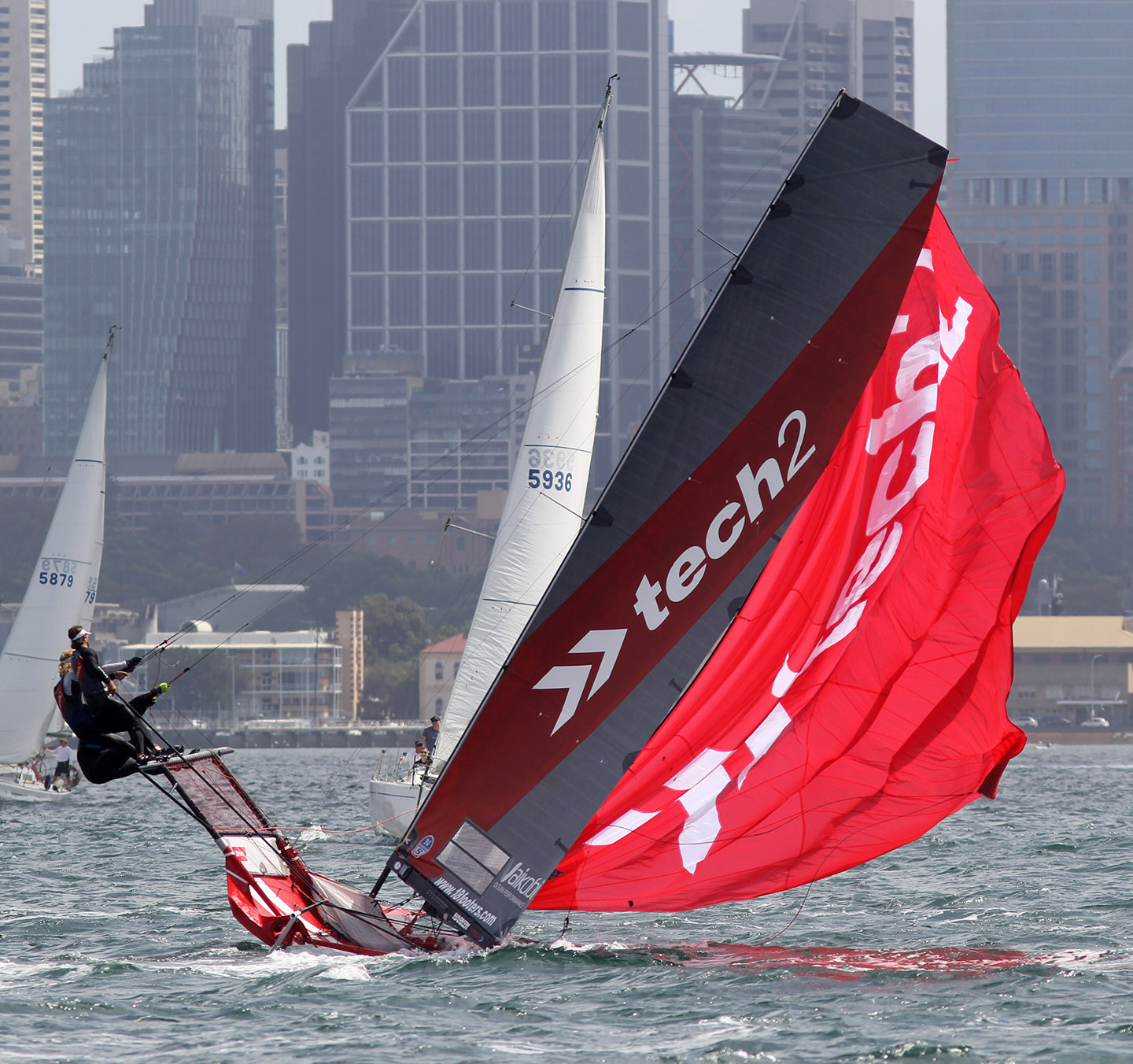 Following the disqualification of Race 2 winner tech2, today’s two races of the JJ Giltinan 18ft Skiff Championship, on Sydney Harbour, took on far more importance for the pre-championship favourite team which now had to complete the nine-race regatta without any further possible ‘discard’ score. Unfortunately for the Australian champion team, things didn’t get better. they got a lot worse with a sixth placing in Race 3, followed by a retirement from Race 4 after colliding with another competitor shortly after the start. While things were not looking good for tech2, it was all smiles for the experienced Smeg team of Michael Coxon, Ricky Bridge and Trent Barnabas which took out both races with a classy exhibition in the 13-20 knot SSE wind. Smeg came from behind at the first windward mark to score a 48s victory from Yandoo (John Winning, Fang Warren, Mike Kennedy), with Yandoo Winning Group (John Winning Jr, Seve Jarvin, Sam Newton) a further 51s back in third place. Bird and Bear (James Dorron) was fourth, followed by Shaw and Partners Financial Services (Jim Colley) and tech2 (Jack Macartney). Smeg’s winning margin was 19s from Andoo (Marcus Ashley-Jones, Jeronimo Harrison, Cam Gundy), with a consistent Shaw and Partners Financial Services another 39s back in third place. Noakesailing (Sean Langman) showed a return to form to finish in fourth place ahead of Yandoo with the rookie Vintec team, led by Tom Cunich, coming home sixth. After the four races sailed so far, and with five more to be contested, Smeg has a total of 10 points, followed by Yandoo Winning Group on 15, Andoo 18, Noakesailing 22, Finport Finance (Keagan York) 25 and Shaw and Partners Financial Services on 26 points. In Race 3, most of the fleet elected to use their #2 rigs while only a handful of the 20-boat fleet went for the bigger #1 rigs. The smaller rig proved to be the best suited for the conditions and Yandoo Winning Group held a narrow lead over Smeg as spinnakers were set for the run back to the bottom mark on the first lap of the course. Bird and Bear was in third place just ahead of tech2, Yandoo and the Oak Double Bay-4 Pines (Aron Everett). With her bigger spinnaker, tech2 began to challenge the leaders but a near capsize as the team had to gybe quickly to avoid another skiff was a severe blow. The breeze began to increase over the next lap of the two-lap, windward-return course, and the strong Smeg team was superb as it increased the lead to finish a clear winner. In Race 4, Yandoo, tech2 and Finport Finance won the start at the boat end of the line, but it was Smeg once again which held the lead at the first windward mark of the three–lap course. Yandoo continued to impress on the day and held second place, 20secs behind the leader, followed by Shaw and Partners, Andoo and Noakesailing. Smeg continued to lead at the bottom mark, but this time the #1 rig was beginning to gain a better advantage and Andoo took the lead on the work back across the harbour into Rose Bay., and was still in front as the fleet headed off for the final lap. While the Andoo team made no mistake, Smeg was just sailing too well on the day and had once again grabbed the lead from Andoo as the two leaders headed for home. Races 5 and 6 of the championship will be sailed Wednesday, March 10 on Sydney Harbour .

Spectators can follow the racing on board the club’s spectator ferry, however due to the COVID-19 policy, numbers are limited.  Booking online through the club’s website www.18footers.com is essential. https://www.18footers.com.au/18-footers-sailing/spectator-ferry/

For those unable to make it out onto the water, the club’s live broadcast team will be on Sydney Harbour to capture all the action.  Live streaming is available at www.18footers.com by clicking on the ’18 Footers TV’ link. – Frank Quealey, Australian 18 Footers League