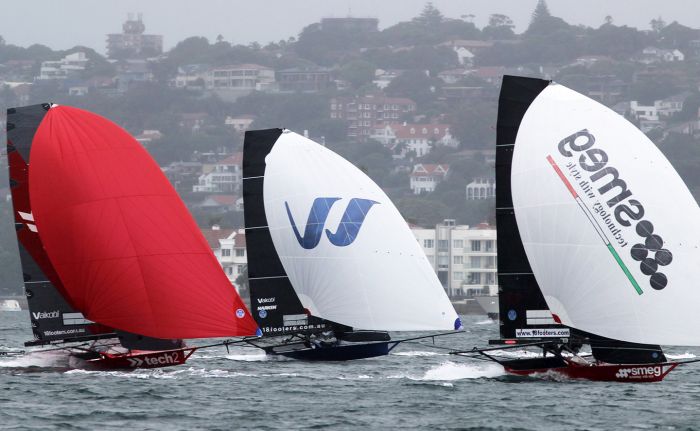 01/02/2021
Defending champion tech2 team of Jack Macartney, Charlie Wyatt and Lewis Brake holds a slender lead in the Australian 18ft Skiff Championship after today's incredible day's racing in Races 4 and 5 of the series being sailed on Sydney Harbour.
The two races sailed today produced two of the best finishes seen for some time as the leaders raced to the finish line with mere seconds between the charging teams.
Line honours in both races went to the Smeg team of Michael Coxon, Ricky Bridge and Trent Barnabas although a protest has been lodged by the tech2 team against Smeg for a breach of the port-and-starboard rule in Race 5.
With over half the championship completed, but without discarding each team's worst result so far, tech2 leads the provisional points table on six points, followed by Smeg on eight points, then Finport Finance (Keagan York) and Noakesailing (Sean Langman) tied in third place on 24 points.
The points table will become much more relevant after the protest decision is made and the worst results for each team are discarded.
In today's first race (Race 4 of the championship), sailed in18-knot SSE winds, Smeg came from behind tech2 at the final top mark to beat tech2 by 12s, with Winning Group (John Winning Jr., Seve Jarvin and sam Newton) only 15s further back in third place. Shaw and Partners Financial Services (Jim Colley) was fourth, followed by Yandoo (John Winning) and Noakesailing.
In the latter race, the wind was a little softer but the racing was red hot and produced a wonderful finish with the result in doubt until the very end.
At the final top mark, tech2 held the lead, but Smeg again showed better downwind speed on the day and crossed the finish line only 4s ahead of the rookie Shaw and Partners Financial Services team (Jim Colley, Harry Bethwaite and Shaun Connor) which continues to improve in every race.
Finport Finance (Keagan York, Matt Stenta and Phil Marshall) was just another 4s back in third place.  tech2 came home in fourth place, one second behind Finport Finance and The Kitchen Maker-Caesarstone (Jordan Girdis) only 4s further back in fifth place. Sean Langman's Noakesailing again finished in sixth place.
Skiffs were coming at the finish line from a variety of directions and the result was only decided around ten metres from the finish line.
There was a dramatic start to Race 5 when Winning Group made a late rush to get a flying start.  The move almost paid off but the team was marginally over the line and declared UFD by the starter and took no official part in the race.
Despite the decision, Winning Group continued to sail the course and dominated the fleet with some spectacular speed sailing on both the windward and downwind legs of the course.
There appears to be little between the top three teams, tech2, Smeg and Winning Group, and the racing over the coming weeks should be sensational as all teams continue to tune up for the JJ Giltinan Championship in March.
Races 6 and 7 of the Australian Championship, will be conducted next Sunday (January 24).
Spectators can follow the racing on board the club's spectator ferry, however due to the COVID-19 policy, numbers are limited.  Booking online through the club's website www.18footers.com is essential. https://www.18footers.com.au/18-footers-sailing/spectator-ferry/
For those unable to make it out onto the water, the club's live broadcast team will be on Sydney Harbour to capture all the action.  Live streaming is available at www.18footers.com by clicking on the '18 Footers TV' link.
– Frank Quealey, Australian 18 Footers League