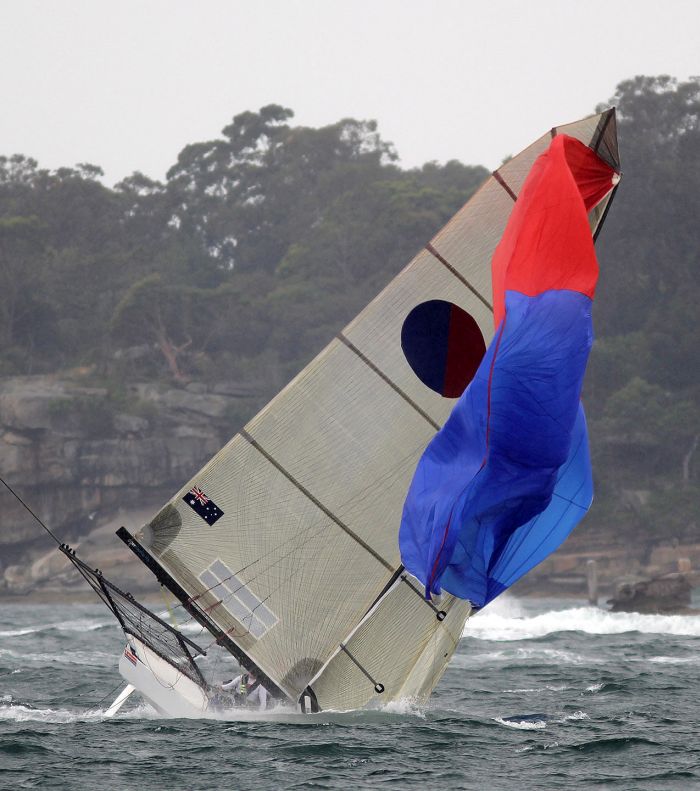 Yandoo was leading before this happened. Photo 18 Footers League.

Finport Finance (Keagan York) came home only 5s behind “The Oak' in fourth place with the backmarker, Noakesailing (Sean Langman), another 20s back in fifth place. Only three more boats, Yandoo (John Winning), Rag & Famish Hotel (Bryce Edwards) and The Kitchen Maker-Caesarstone (Jordan Girdis) completed the race from the 16 starters.

After today's racing, Appliancesonline.com.au leads the pointscore in the seven-race championship, with a total of 16 points, followed by Noakesailing on 20, Finport Finance on 26, The Oak Double Bay-4 Pines on 28, Yandoo on 29 and Smeg on 34.

With No. 1 rigs (the big ones) set for a moderate North East wind, the fleet set out from the rigging area in Double Bay, to the start line off Clark Island, but were hit by the first of the day's dramatic conditions even before the starter signalled a start.

The wind settled as the fleet made its way to the first set of windward marks and the battle for the lead developed between Finport Finance, The Oak Double Bay-4 Pines and Winning Group, with Noakesailing, The Kitchen Maker-Caesarstone and Vintec (Kirk Mitchell) leading the next group.

As the fleet approached the 3-buoys windward marks, the wind roared up to around 25-knots and none of the skiffs could do a bear-away and the fleet was forced in towards Watsons Bay as the fleet 'disappeared' from view as the weather closed in. No team survived the battering. Every team capsized and a number of skiffs came away with damaged gear, before the visibility improved and Yandoo's red and blue spinnaker appeared from the gloom.

John Winning, Mike Kennedy and Nick Daly, the Yandoo team, are all experienced skiff sailors and set off for the wing mark at the south end of Shark Island but even with their experience couldn't overcome the strong wind and nose-dived as they tried to sail into the Rose Bay mark. Smeg and Rag & Famish Hotel then became the two leaders before they also capsized as they attempted to gybe at the wing mark.

The weather settled down a little over the second lap of the course and the race for the lead was a thriller as Finport Finance and Smeg raced downwind to the bottom mark with only 10s separating them.

Series leader, Appliancesonline.com.au was outstanding on the run and moved into third place just ahead of Noakesailing, The Oak Double Bay-4 Pines and Dal Zotto (Jack Sprague).

Conditions became extreme once again when a NW storm hit the fleet on the final windward beat then left the leading five boats with almost no wind afterwards as they each tried to reach their final rounding buoys.

As the five boats finally set their spinnakers for the run home, conditions suddenly became 'normal' and the race to the finish line was a tribute to the skills of each crew as the five boats completed the long course with only 1m15s separating them after a truly unbelievable day on Sydney Harbour.

The Australian 18 Footers League's 2019-2020 Season continues next Sunday when the club will stage Races 5 and 6 of the Spring Championship.

Spectators can see all the teams in the rigging, then follow the racing on board the spectator ferry, which leaves Double Bay Wharf, alongside the rigging area, each race day at 2pm.