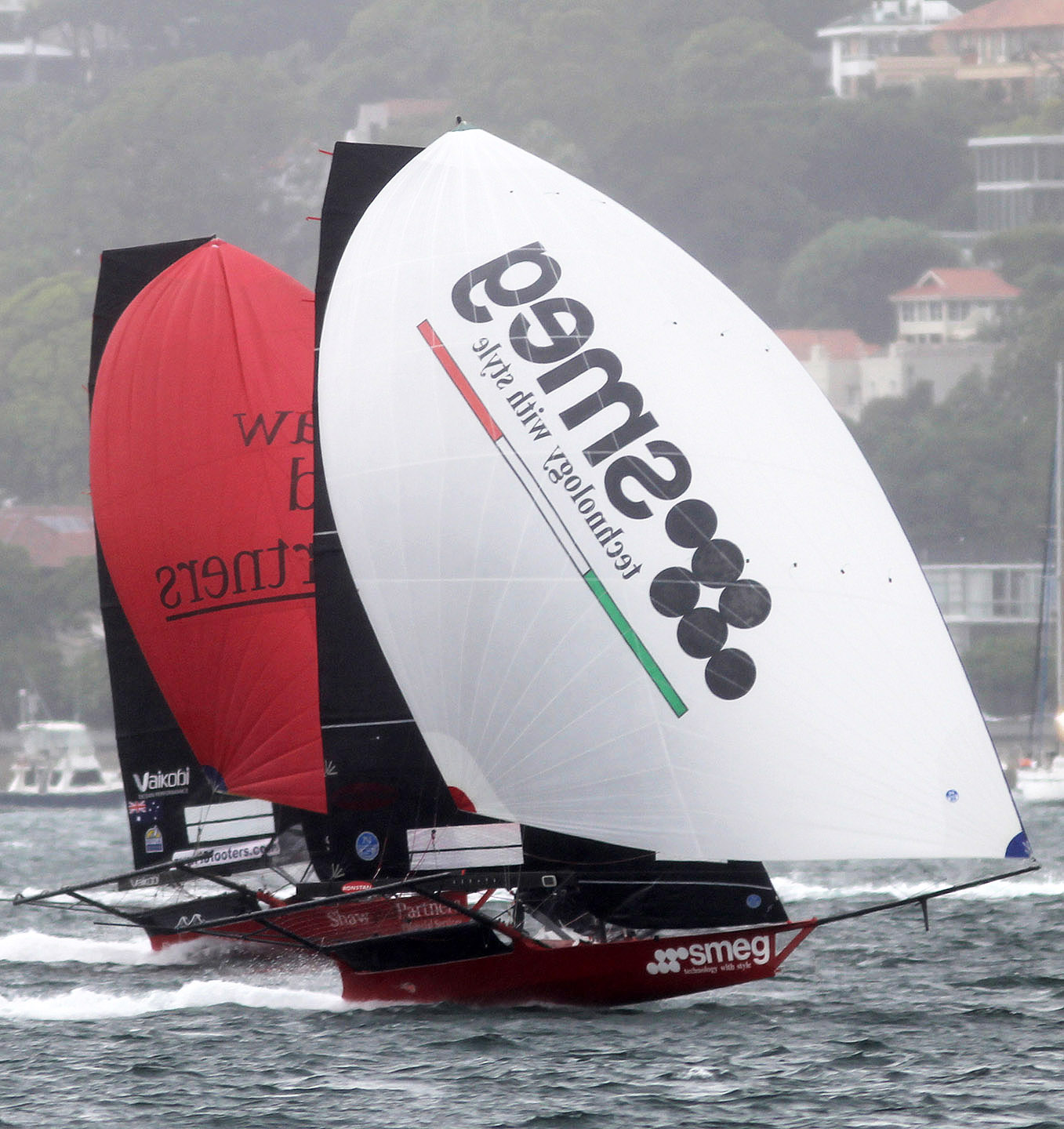 Close battle behind the leaders on first lap of the course. Photo Michael Chittenden/18 Footers League.

The Smeg team of Michael Coxon, Ricky Bridge and Trent Barnabas was unbeatable for the title of 2021 JJ Giltinan 18ft Skiff champion after yesterday’s Race 8 of the championship, but today’s final race on Sydney Harbour held more than enough interest to entertain patrons on the two club spectator ferries following the event. Several teams were in contention for placings behind the Smeg team and a strong Southerly wind sweeping across the harbour was adding even more pressure to the fleet. Fifteen teams finally faced the starter for the three-lap course set between Nielsen Park and the southern end of Rose Bay. Yandoo Winning Group (John Winning Jr., Seve Jarvin, Sam Newton) trailed tech2 at the final windward mark in Rose Bay but produced an outstanding spinnaker run to score a 3s victory over the tech2 team of Jack Macartney, Charlie Wyatt, Lewis Brake. Finport Finance (Keagan York, Matt Stenta, Phil Marshall) sailed consistently well throughout the entire course to finish a further 1m26s back in third place, ahead of Shaw and Partners Financial Services (Jim Colley), Andoo (Marcus Ashley-Jones) and Noakesailing (Sean Langman). Smeg finished the championship on 19 points, followed by Yandoo Winning Group on 28, Noakesailing 36, Shaw and Partners Financial Services on 38, tech2 39 and Andoo on 43. The race to the first mark today was tight with Smeg and Yandoo Winning Group electing to sail on the LHS of the course in Rose Bay while tech2 went to the RHS near Shark Island. tech2 led Yandoo Winning Group, Yandoo and Finport Finance when the fleet finally reached the mark. The tech2 team continued to lead downwind but a ‘drifting’ mark proved costly to the leader and Yandoo came through to become the new race leader. When Yandoo capsized off the southern end of Shark Island, tech2 regained the lead and continued to hold the lead over the next lap of the course, just ahead of Yandoo Winning Group. Finport Finance and Smeg were engaged in a battle for third place before a capsize put the new champion Smeg team out of contention on the second spinnaker run. It was a great effort by all the competing teams who certainly put on a wonderful show for the spectator fleet. The annual Queen of the Harbour race will be sailed next Sunday, March 21. Spectators can follow the race on board the club’s spectator ferry, however due to the COVID-19 policy, numbers are limited.  Booking online through the club’s website www.18footers.com is essential.  https://www.18footers.com.au/18-footers-sailing/spectator-ferry/ For those unable to make it out onto the water, the club’s live broadcast team will be on Sydney Harbour to capture all the action.  Livestreaming is available at www.18footers.com by clicking on the ’18 Footers TV’ link Frank Quealey, Australian 18 Footers League