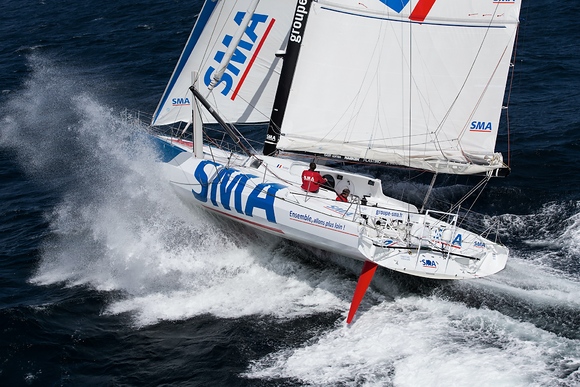 Paul Meilhat, skipper of the IMOCA 60, SMA, has today confirmed his participation in The Transat 2016.

SMA is the first of the IMOCA class to enter the solo classic from Plymouth to New York that sets sail on 2nd of May. Tracing its roots back to 1960, the race will be contested in four classes – IMOCA 60s, Multi 50s, Class 40s and giant multihulls or Ultimes with no limitation in upper size in that class.

Born just outside Paris, Paul Meilhat, the 33-year-old SMA skipper who now lives in Brest, will race in The Transat as part of his build-up to the 2016 Vendée Globe solo round-the-world race.

“The Transat will actually only be my second solo transatlantic race ever but I’m happy to be taking part for that very reason,” said Meilhat. “I know many IMOCA skippers see The Transat as a training ground for the Vendée Globe and the truth is, it’s important to have as much training as possible and you know what they say… if you want to be a good sailor in 30 knots of wind you had better learn to sail in 40 knots and that’s the opportunity The Transat gives us.”

Historically The Transat has seen some of the greatest sailors of all time compete ahead of their Vendée campaigns. Although The Transat is an iconic race in its own right, for the IMOCA fleet it has become the race to win for this very reason.

Accompanied by the Mer Agitée technical team set up by solo sailing legend Michel Desjoyeaux and Team Manager Marcus Hutchinson, Meilhat has one of the best support networks in the class.

“Do I feel under pressure to win The Transat? Let’s just say I would like to finish,” he laughs. “You only need to look at the history of this race to know that getting to the finish is not a given. Right now I’m concentrating on learning everything I can from my technical team so that if anything does happen I would be in a good position to fix it. I know I will never be as good as them and their individual specialties but if I can even become half as good I’ll be in a good place.”

Meilhat started sailing at 11 years of age (he considers himself to be a late starter) and began offshore sailing at 27, competing in several Figaro races before teaming up with Desjoyeaux. Some consider the SMA campaign a rather ambitious one, with Paul going from Figaro sailing to what he calls “the big boys game,” but so far he and Desjoyeux have proved themselves a worthy team, notching up several race wins already this year. Recently they entered the two-handed Transat Jacques Vabre but were forced to retire after SMA incurred damage to its keel.

“I’m aware that the mental and physical sides of The Transat are extremely difficult to bear and this is one of the reasons why so many skippers are interested in taking part, myself included,” Meilhat adds. “Michel has been very generous with his knowledge so far so I’d like to think I’m not going in blind.

“This is a race that will inspire many French sailors because it’s the event that introduced France to offshore racing. This is the one that existed before the Route Du Rhum, before the Vendée Globe. For us French sailors it’s an important one. Ever since Tabarly’s first win in 1964 it has been a major part of France’s sailing heritage and I’d say I’m pretty happy to be taking part.”

Entries for The Transat are open until January 8th 2016.

The Notice of Race is now available and entries are open for teams interested in competing. Please visit www.thetransat.com for more information.