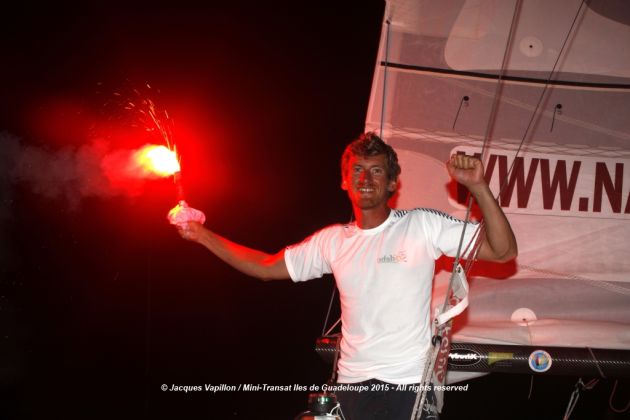 Arriving in the small hours of the Guadeloupean night, the Nautipark skipper finishes as the unchallenged winner of the Mini Transat îles de Guadeloupe. Despite an unscheduled stop on the outskirts of St. Francis, following a chance encounter with a fishing trawler line, Frédéric Denis was able to calmly finish the stage head and shoulders above the rest. After being received by dignitaries from Guadeloupe and Pointe-à-Pitre at the foot of the Memorial statue, he was able to answer questions from many journalists before entering the Bas du Fort marina.

The interview took place over the skipper’s first real meal since leaving Lanzarote.

Firstly, tell us about your feelings about this finish.
“It still hasn’t sunk in that I have won the Mini Transat. It's a little unreal, something that stops suddenly in this way.You are there, in the middle of the sea, approaching the finish line and,all of a sudden, you're surrounded by boats that bombard you with flashes and blinding lights. You try to see the people but you can’t see anything. That's why I finished with the jib and mainsail when I should have been sailing with the spinnaker. It was kind of like a decompression chamber for me to finish at a slow speed in that way. It's a pretty violent transition … of course, you're happy, you're proud, but I feel that only now is the first time I can really taste this happiness.”

You’ve been setting an incredible pace…
“In contrast to the first stage, there was no time to adapt. We started out with spinnakers and immediately we were going at nearly 15 knots,and at the same time,had to deal with an awful sea. The first stage increased progressively in intensity. With this one, we had to be in the game straight away. It was totally wild…we went out a little too fast. I had a lot of little breakages, but nothing held me back too much. After all, it’s also about having a little luck. My biggest handicap was the loss of my aerial which forced me to be at the helm more than I wanted. But it’s no joke- you need to do some DIY regularly.”

You went upstream of the race : that was a lot of work for your autopilot , and also for NKE
“I think it was decisive in the night of 2nd to 3rd November. At that time, the auto-pilots was better at the helm than I was. Because I can’t read the instruments without glasses, I can’t follow a precise course after a certain time at night. So that night, I did a lot of sailing on autopilot…and, with the autopilot handling the power and acceleration of the boat, I really increased the gap in the race. I sailed more than others. I heard the message on the radio saying we needed to reduce speed and during this time, I continued with a the spinnaker half up and the mainsail with two reefs. That way, I know I damaged the morale of my opponents. “

Did the technical preparation of the boat play an important part?
“I had the advantage of having worked on improvements, but also, having benefited from the advice of Antoine (Roux) and Gwénolé (Gahinet) who both previously skippered the boat. It really was work in trio and has been very productive. I didn’t know the prototype culture, and they were particularly valuable with their advice. The aim was to start with the same basic model and see if we could improve upon it, in agreement with the architect Henri-Paul Schipman, Gwéno and Antoine. They sailed with me on the boat. They gave me a real-world advice about the boat that allowed me to move to a higher level within a short time. “

How do you control your worries during an event like this?
“It is not the easiest. I still have to make progress in this area. The best method I found was to go to sleep,and clear my head. Afterwards, in the morning of November 4th, I had problems with the mainsail (it wouldn’t go up all the way), plus the loss of my aerial. I asked myself whether I should stop in Cape Verde.”

How do you feel about Davy Beaudart’s abandonment?
“My initial reaction is disappointment and sadness. For me, I signed up for the race with the primary objective of crossing the Atlantic,and secondly, getting a good result if possible. So,with each guy that stops, it's one less guy to finish. It is obvious that Davy,who was 9 hours ahead, was one less winning candidate. You can’t stop thinking like that, even if you still prefer that winning happens on the water.We will never know what would have happened, but Davy was the biggest fish in this Mini Transat îles de Guadeloupe .”

When you hear that an opponent of this calibre has given up, doesn’t it play on your mind that ‘..there, but for the grace of God, go I…?'. “Actually, I think I had unplugged my brain … I knew I had to work very hard before Cape Verde. “

What lessons will you take away with you from this Mini?
“Many things…I’ve already learnt about myself, because I think I had never gone that far. I really pushed myself to the limit. It's amazing: I had euphoric moments, and moments of depression. If you have any tendencies that way,I imagine it’s the best way of becoming bipolar. It’s very different being on your own when on land, and when on the water. These boats are part animal: inside you live in two square metres, and it shakes you around in all sorts of ways.

What do you want to do after this Mini Transat îles de Guadeloupe?
“I’ve already got what I wanted: to enjoy the taste of victory.After this, perhaps projects such as the Route du Rhum or the Vendée Globe.I want to do more offshore projects with a good amount of technology.This appeals to my engineering side. I just need to come back to earth first. We mustn’t forget we had incredible conditions … and we have some beautiful memories with friends. I look forward to welcoming them.”

While Guadeloupe celebrates the winner of the Mini Transat îles de Guadeloupe, competitors continue to battle it out. The stakes are high for this finish: will Michele Zambelli (Illumia) manage to grab second place in this second stage? Out of Luke Berry (Association Rêves), Axel Tréhin (Aleph Racing) and Ludovic Méchin (Microvitae), who will mount the podium of the Mini Transat îles de Guadeloupe?

The wind eased a notch in the West Indies and gaps in the distance can transform and multiply the differences at the finish time. The battle between Michele Zambelli and Luke Berry is still fierce for second place in this stage. For the British sailor,the stakes are high because there is a chance to gain second place overall in the Mini Transat. Arriving 47mins, 04 seconds behind Axel, Luke has a lead of 53 miles lead in the rankings at 15.00pm. Another accomplice who could come and disturb the game is Ludovic Méchin,who is currently not located, but could also spring a surprise and eventually grab third place.

In the production boats, the gap widened between Julien Pulvé (Novintiss) and Ian Lipinski (Entreprises Innovantes).The suspense may be over for first place overall. Behind them, Tanguy Le Turquais (Terréal) is in a strong third place, but there are four people competing for places on the podium. Edwin Thibon (Cœur Fidèle )is under direct threat from Edward Golbery (Les Enfants du Canal ) and Armand Jacquelot ( We Van). Charly Fernbach (Le Fauffiffon Hénaff),in seventh position on a slightly more southerly route, also hopes to join the battle. We expect the finish of the first production boats during the day on Sunday.