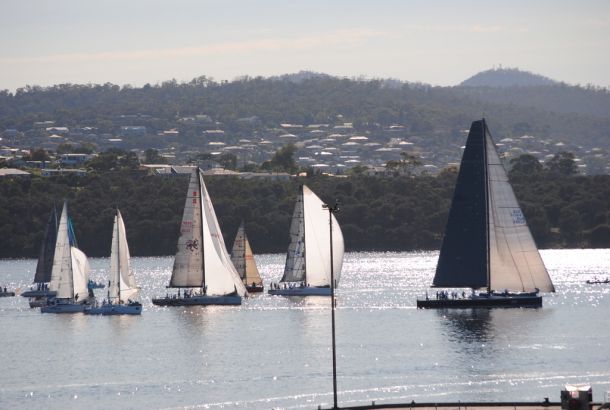 Alive sails away from the fleet minutes after the start of the Bruny Island Yacht Race. Photo Peter Campbell.

Overnight, winds along the ocean-side coast of Bruny Island and in the River Derwent have been light and variable and it took Alive almost three hours to sail the final three nautical miles up the river to finish at 00:38:47. Skippered by Duncan Hine, the Reichel/Pugh 66 led the small fleet from start to finish over the 89 nautical mile course circumnavigation of the island south of Hobart.

Tony Lyall’s Cougar II finished at 02:38:27 and at 6am the rest of the fleet was in a close bunch at the mouth of the Derwent sailing less than 3 knots of variable wind. The Fork in the Road headed this group, off Cape Direction, with Wildfire last in the fleet, approaching the Iron Pot.

Royal Yacht Club of Tasmania principle race officer Roger Martin early this morning predicted the handicap results will favour the small boats with last year’s overall winner, Stewart Geeves’ Footloose, well placed to take out the main AMS handicap category with Winstead Wines also in the running. He said Whistler and Intrigue appeared well placed to win IRC while Wildfire had a strong chance to take out the PHS category.

Alive led the small, 11 boat fleet right since the start off the Royal Hobart Regatta grounds yesterday morning, continuing to open up her lead down the winding reaches of the D’Entrecasteaux Channel in a light to moderate south-westerly breeze. She reported sailing through The Friars, a group of rocky islets off Tasman Head, at 6pm, having taken eight and a half hours to tack down the Derwent and then the D’Entrecasteaux Channel.

Alive was already outside the race record but, as predicted by Royal Yacht Club officials, she made a faster spinnaker run and reach up the ocean side of Bruny Island, covering the next 30 miles in four hours before coming to a virtual stop in the river.

At 10pm last night she was off White Rock, eight nautical miles from the finish, with Cougar II just north of Adventure Bay, but it Alive another three hours to finish her first Bruny Island race.