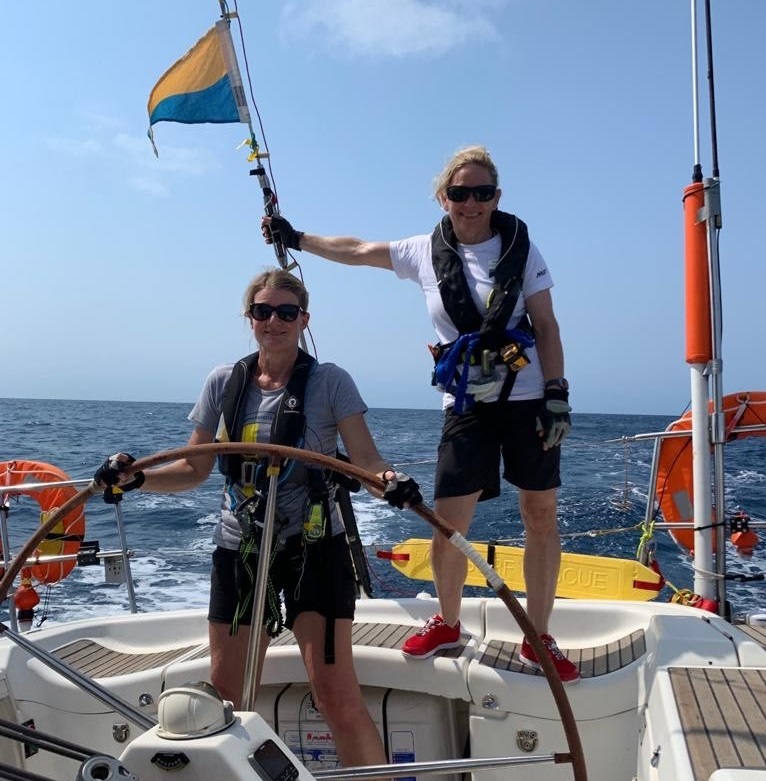 A slow night on the race track in the 2019 Rolex Sydney Hobart Yacht Race, some of the bulk of the fleet struggling to get five knots from their boats, but good news is on the way, the Bureau of Meteorology predicting a northerly breeze of 15 to 20 knots to reach the bulk of the fleet by midday today.

This morning, the TP52 Stay Calm Hungary, drifted over the Castray Esplanade finish line at 5.50am, her crew looking weather worn, but wearing wide grins none the less. The reason? Last year Aron ‘Roni’ Ormandlaki did not get very far in the race, as the yacht was dismasted.

This year, the Hungarian yachtsman purchased the yacht, and being a rigger located in Sydney, completely re-rigged her and voila, he and the crew finished the race.

“Good to finish the race. During it, I said this is terrible, it is so long, but by the time you finish, all of that is forgotten and you feel good to finish this race,” he said this morning dockside.

It was all smiles aboard Frederic Puzin’s French entry, Daguet 3, which finished at 7.58am. Daguet 3 had sat at the top of the standings in the battle for the Tattersall Cup, but when the north-easterly came in, they were overtaken by the formidable TP52s and larger boats.

Puzin and his 24-year-old daughter, Doris, sailed their first Rolex Sydney Hobart together and could not wipe the smiles from their faces as they docked. “We will be back, for sure,” were the first words from Daguet 3’s owner.

“We had a great race with a good crew,” he said of the smattering of round-the-world sailors on his crew, such as Sam Goodchild and Frenchmen Thomas Rouxel and Nicolas Troussel.

And the boat? “Yes, I am glad I bought this boat. It is very good and we will take her back to Europe after a few days here (in Tasmania),” he said of the Ker 46 formerly named Patrice that he purchased from Sydney yachtsman, Tony Kirby.

Asked what they would do in next few days, Doris, who sails regularly with her father in international offshore events, said, “We will have a look around and yes, we will try the local scallop pies for sure.”

On the 1993 Sydney Hobart winner (then known as Cuckoos Nest) Filepro, Tasmanian owner Tim Gadsby reported from the Tasmanian Coast: “It’s been a busy night. We had an exciting time last night (Friday night) surfing in 25-30 knots of breeze. We hit a new boat speed record for the race at about 5am – 20.4 knots.

“We’ve struggled for breeze today (Saturday), with many boats behind running down on us.

In the early evening he said from the 40-footer, “We’re finally moving again with 14 knots off breeze from the north-west. We’re running a full mainsail and Doyle Cableless Code Zero. We are now awaiting a south-easterly change tonight.”

On board Jason Close’s Beneteau First 47.7, Enigma, two of the crew, Isabel Rawlence and Chloe Tetlow took time out for a bit of fun in the light air to take some happy snaps and reported they were “enjoying the race.”

Twenty two boats only have finished the 2019 Rolex Sydney Hobart Yacht Race so far, due to a mix of conditions. A flood of boats are expected to arrive from 3pm onwards and throughout the night.

To-date only three boats have retired from the race: Hollywood Boulevard, Faster Forward and Minerva.