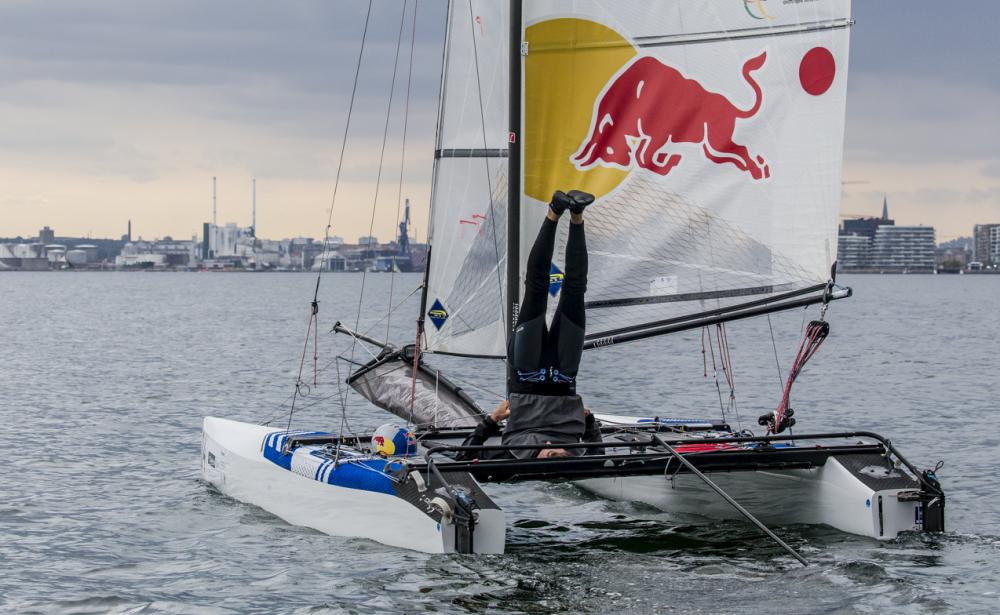 Sailing’s oldest enemy played havoc what was supposed to be the busiest day of theHempel Sailing World Championships Aarhus 2018 so far on Monday.

The morning forecast for 8-10 knots westerlies, maybe building and swinging to 12 knot south-westerlies by the late afternoon, gusting up to 20 knots, did not materialise.

With only half of many of the fleets managing to race, the leaderboards were unclear, but there were still some significant moves.

In the men’s 470, Australia’s Mat Belcher and William Ryan, the silver medallists in Rio, won the only race of the day in the gold medal fleet. They are now just one point behind the Swedish 2018 European Champions, Anton Dahlberg and Frederik Bergström, whose 13th place became their current discard.

Weakening offshore westerlies left boats lolling in the Bay of Aarhus waiting for start and on occasion a finish as boat stalled on the line. When they did pick up they were neutralised by the sea breeze.

The meteorological dynamic equilibrium was not always mirrored in the fleet, but World Championship racing is about patience as much as passion.

In the Nacra 17, only the yellow qualification fleet was able to get two races in and even the hot favourites, Italy’s Ruggero Tita and Caterina Marianna Banti, struggled. In the first race they were 23rd at the top mark before storming back to 4th. But they could not repeat the trick in the second race, finishing 16th – their current discard.

Nacras need 10-15 knots to foil upwind and about 7 to start downwind. But one Argentinian crew will not have been complaining about boats being stalled on the finish line. It was not the Rio 2016 Olympic champions, Santiago Lange and Cecilia Carranze Saroli, but their junior compatriots Mateo Majdalani and Eugenia Bosco, who followed a win with a second place. In the second race, they were one of three boats to benefit in the slowest motion of a finish as the Finnish boat went backward from leader to fourth crossing the line at just over a knot.

In the 49er, the young French pair of Lucas Rual and Emile Amoros continued to enjoy themselves with a fifth and a ninth place keeping them top – albeit in an incomplete day of racing. That last ninth place will not count, however, because the other two 49er fleets were unable to run their seventh races. The fleet will now be split into gold, silver and bronze fleets on the basis of their first six races – the minimum required for qualification – and race again on Wednesday.

Only one fleet in the 49erFX  manageda race. The second fleet will complete their sixth race tomorrow to finish the qualifying round.

France’s Nicolas Parlier won the onlyrace in the men’s Kiteboard – to make it seven out of seven so far.

In the women’s RS:X, Great Britain’s Bryony Shaw won the only race possible and Poland’s Zofia Noceti-Klepacka was third, taking her top of the leaderboard.

Laser and Laser Radial were on a lay day.

Emile Amoros – France – Nacra
“It is difficult out there. But we’re outsiders and we’re young so there is no pressure on us. We’ve have a good understanding and spirit. We’re friends and we’re both here to make the boat go faster. It’s true that this year no one has won lots of regattas, but it’s a strong fleet.”

Oscar Gunn – New Zealand – 49er
“We’re happy enough. It was light, tricky racing, so to be inside the top 10 in this stage in the regatta is a keeper. We survived to fight another day.”

Jena Mai Hansen – Denmark – 49erFX
“We knew we had a late start today – 14:30, so we had a lovely morning, very chilled and we had plenty of time get ready for sailing ,but when we got here we could see that the wind was playing up. It slowly died and we knew that the waiting game has started.

“That’s all we’ve been doing all day, waiting a lot onshore. Suddenly a lot of sailors came in and we got sent out and waited out there as well. We’ve just been trying to keep the mood up.

“We were a little pressured because the other FX fleet got one race in and we needed to squeeze our race in. We thought we were going to start but it completely disappeared. We waited for one and a half hours on the water. We also talk about everything else other than sailing. The weather is supposed to pick up tomorrow so we hope to get an extra race in.”

Liv Mackay and Micah Wilkinson – New Zealand – Nacra
Liv: “It was pretty good. We were pretty happy we had two keepers today, which was the aim of the day going into it.”

Micah: “Getting tripped up is a lot easier on days like today so to survive it is a relief.”

Liv: “It’s never fun towards the end of a race when it’s starting to die out. For Micah and I it’s about keeping calm, clear comms, keeping your head out of the boat consolidating where you are.”

Liv: “Tomorrow is our last day of qualifying for gold fleet so we just want three keepers on the board. It looks like another good breeze.”

Bryony Shaw– Great Britain – RS:X Women
“The wind out there was patchy and unstable. A good day for me, I managed to win the race and that’s helped me bounce back up. I’m feeling much better about the prospects for the week.”