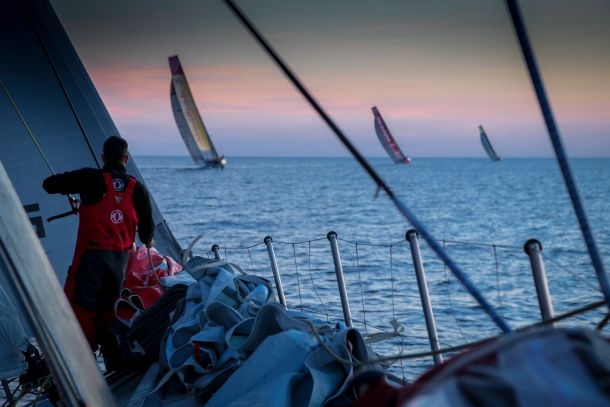 It was slow going for the Volvo Ocean Race fleet after leaving Lorient, France yesterday, as the teams fought strong tides on this sprint leg to the pit-stop in The Hague, Netherlands.

Team SCA (Sam Davies/GBR), who made a bold move to split from the pack and keep close inshore, was caught in a strong adverse current and no wind at all as they rounded the Pointe du Raz. It took the magenta team three tries to cross the current and round the point before they managed to break through and sneak along the French coast.

“We approached the area with a few knots of boat speed. Would it be enough to take us past? The stream got stronger and stronger the closer we got,” wrote OBR Anna-Lena Elled/SWE. “When we arrived, it looked like the water was boiling under us. The boat started to move in various directions as the wind was weak, and we started to drift sideways. We looked like we were not going to make it.”

The rest of the seven-boat fleet initially headed further west in search of stronger breeze, but later converged on the coast of France.

Team Brunel (Bouwe Bekking/NED), who led the fleet by about one nautical mile (nm) early in the leg, continued to maintain a thin advantage of 0.6 nm over Team Alvimedica (Charlie Enright/USA) at the 09:45 UTC position report today. MAPFRE (Iker Martínez/ESP) and Dongfeng Race Team (Charles Caudrelier/FRA) were in third and fourth positions, separated by roughly one nautical mile.

Abu Dhabi Ocean Racing’s Matt Knighton/USA noted that the currents were taking on a life of their own. “We’ve been slammed, spun, knocked over and pushed backwards, but never before has it felt like there’s a monster beneath the waves tugging the hull whichever way it wants. The currents grab our fins and shake the boat with no regularity.”

The teams should be able to shift gears into overdrive later this afternoon, as they head east towards the Western Approaches. The northwesterly winds will become westerlies early tonight, increasing to 15-22 knots.

The estimated time of arrival remains between 1400 UTC on Thursday and 0500 UTC on Friday morning.

Fans can follow the entirety of Leg 9 live on our tracker on the app. Data is available with a frequency varying between 10 seconds and five minutes for the fleet.