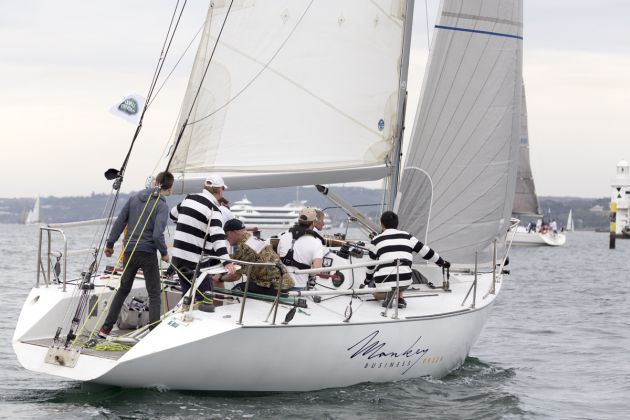 Monkey Business made it two victories in a row - credit David Brogan.

Breakfast cooked by the Cruising Yacht Club of Australia’s Breakfast Club was the liveliest part to the day for participants in the Land Rover Series on Sunday, as the pace of the race was slow and the mood mellow for Race 3 on Sydney Harbour.

A light north to north-easterly breeze peaked at around 8 knots and was a drifter at the other end of the scale. The fleet also had to traverse the incoming tide.

Divisional wins went to those who went the distance and played patience best. There was just enough air to eke out the race, and just as quickly as it faded, the breeze was rejuvenated, mirroring conditions of last Sunday.

“I feel vindicated after thinking I’d won last week, only to discover later that Outlaw had beaten us. I got rid of the raw prawn and won the race,” John Cameron said laughing after steering his Dibley 46, More Witchcraft, to victory from Les Goodridge’s Wax Lyrical and Alan and Tom Quick’s Outlaw.

“The start of the race was delayed for over an hour after the Sydney 38’s started on time, only to have their race abandoned shortly afterwards. Then the course was shortened for all divisions. Denis Thompson (Principal Race Officer) made the right decisions, because we started in a decent breeze and finished in 3 knots.”

Hans Sommer, owner skipper of Sommer Breeze, a Cavalier 350SL, concurred. “Race officials did a very good job in postponing the race and then hanging in to get us a start and then shortening the course. I think everyone was pretty happy about that.”

Two weeks of light airs translated to some repeat winners from last week, among them Steve McConaghy, who skippered Aftershock to first place in Division A1, Mike Hesse who sailed Hanni to first in Division J1 and Paul Glynn, winner of Division J2 with his 31 year-old Davidson 34, Monkey Business.

Glynn, who in the past has been part of Bob Steel’s successful crews on the various Quests, put together a crew of young amateurs and near-amateurs 18 months ago, and Glynn says they are worth their weight in gold.

“Two of the guys are former world champions in rowing, and the whole crew has been absolutely champion,” Glynn commented.

“We had a new guy on board who wondered why, when we won, were arguing! I told him win, lose or draw, we like to have a spirited discussion after racing each week. Everyone gets a say on the boat, we like to discuss they day.”

On getting his older yacht around the course in double quick time, minus pro sailors and new sails, Glynn said the trick to the last two weeks was to “get all the weight to leeward at the back of the boat going upwind and to leeward forward of the mast downwind. She slips through the water nicely then,” he said, confessing he had missed the start by 20 seconds.

Monkey Business beat another golden oldie to the punch by under a minute: Kevin O’Shea’s S&S One Tonner, Stormy Petrel, built in 1970 for Charles Curran and chartered to Syd Fischer who won the 1971 World One Ton Cup with it.  Third place went to Jeffery Taylor’s C&C41, Arch Nemesis.

All results are provisional and the weekly prize giving has been delayed until next Sunday, due to a glitch in the results system.

Race 4 of the Land Rover Winter Series will be held on Sunday, with the Sydney 38 division first off the blocks at 11.25am.