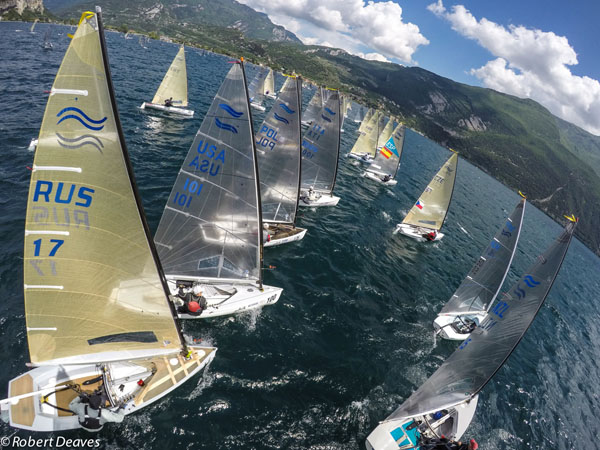 Knowledge of Lake Garda's winds proved an essential ingredient on the first day of racing at the Finn World World Masters as the best sailors rose to the top. Defending champion Vladimir Krutskikh (RUS), 2004 Olympic silver medalist Rafa Trujillo (ESP) and Piet Eckert (SUI) all won both races in their groups to sit on top of the 355 boat fleet.

Numb legs and sore muscles were the order of the day as a solid, and cold, 14-22 knot Ora swept down the lake challenging the fleet with some tight tactical racing. The corners proved popular, especially on the northern course.

Garda put on its best today, if slightly cold, but at least the day stayed dry for the first time since the sailors had arrived. The forecast for the rest of the week is, at best, changeable, with the usual Garda weather not fully in place just yet.

Sailors from 32 countries are enjoying the hospitality of Torbole. Each day Finns are launched from all corners of the northern end of the lake and for four hours the lake is filled with Finn sails and Finn sailors battling tooth and nail for every position. They might be old, but Finn Masters have lost none of their competitive nature.

Having so many rock star names in the fleet has raised the profile of the event far beyond the original concept when a group of ageing sailors decided to race together each year for fun. The Masters has transformed itself into the largest Finn competition each year.

A silver medalist in Athens in 2004, and world champion in 2007, Trujillo is sailing in his first World Masters and has made the best possible start. More lately coaching the 2013 World Champion Jorge Zarif (BRA), he has taken a break from coaching duties to finally be able to sail this championship. While Trujillo probably had the hardest fleet allocation today, Krutskikh was also dominant in his fleet, powering away for two comfortable wins.

Mckenzie has been training hard for this regatta, after his first Finn World Masters last year where he placed 14th. Eckert is also sailing his second Masters after a 17th last year.

But this event is not just about the winning, but more about the taking part, the more so the further you go down the fleet. While the top Grand Master (50+) is the six times champion Mike Maier (CZE) in fifth, and the leading Grand Grand Master (60+) is Marc Allain des Beauvais (FRA) in tenth, the leading Legend (70+) is Valerii Gusenko (UKR) in 104th.

Lake Garda has been called by some sailors here as the University of Sailing. Everyone is learning something about the nuances of sailing on Europe's most famous lake. The Finn is also a university for life with stories and memories being told and relived each evening in the bars and restaurants of Torbole. It is a huge melting pot of experience and knowledge.

Even though some sailors didn't have the day on the water they wanted, the scenery around them is simply breathtaking. The geography of the area that creates its world famous winds dominates the racing, with the huge mountainsides towering above the small boats putting everything into perspective. But it is the boat, the fantastic Finn, that is the true equaliser.

Sailing continues on Tuesday with two more races scheduled for 13.00