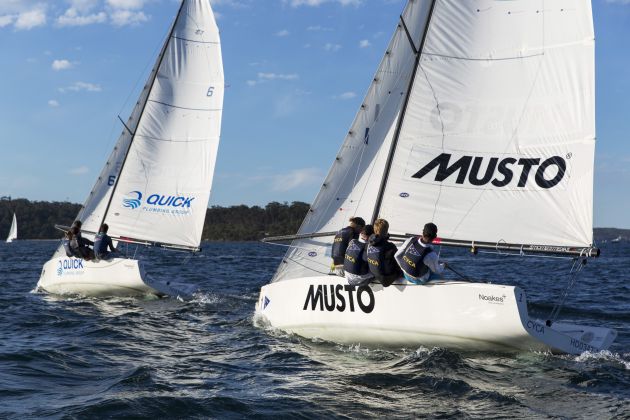 The Cruising Yacht Club of Australia (CYCA) has been appointed by Australian Match Racing Limited as the host club of the Australian Youth Match Racing Championship for 2016, 2017 and 2018.

The club’s race management expertise and the Youth Sailing Academy’s fleet of Elliott 7s provide the ideal skills and facilities to home the event for the next three years.

“The CYCA has aimed to support young people in keelboat sailing since the club began and, while the origins of that may have been in engendering enthusiastic young sailors to join yachting crews, it has certainly been a very strong focus for the club since the inception of the Youth Sailing Academy in 1993,” said the Commodore. “Being appointed as organiser of the Australian Youth Match Racing Championship for three years is a great honour for our club and the Youth Sailing Academy, reinforcing the success we’ve achieved in developing a highly respected framework for young sailors to develop their skills to the very finest level.

“Our aim is to deliver events which are not only organised and managed at a high level of excellence, but to also create an environment in which competitors and their families enjoy the camaraderie and community which sailing provides.”

The 2016 Australian Youth Match Racing Championship will be held over four days in October, with dates yet to be announced.  The event is open to sailors aged under 23 years and racing is expected to follow the traditional format of two round robins followed by semis and finals and a sail-off for minor placings if time permits.

Australian Match Racing Limited’s Chairman Andy Fethers said the appointment of CYCA as host of the event was an important part of developing the sport.

“AMRL are extremely pleased that CYCA are continuing to foster pathways in sailing through youth match racing,” said Andy, who is a four time America’s cup veteran and former match racing world champion.

The Notice of Race will be available in June on the club website www.cyca.com.au