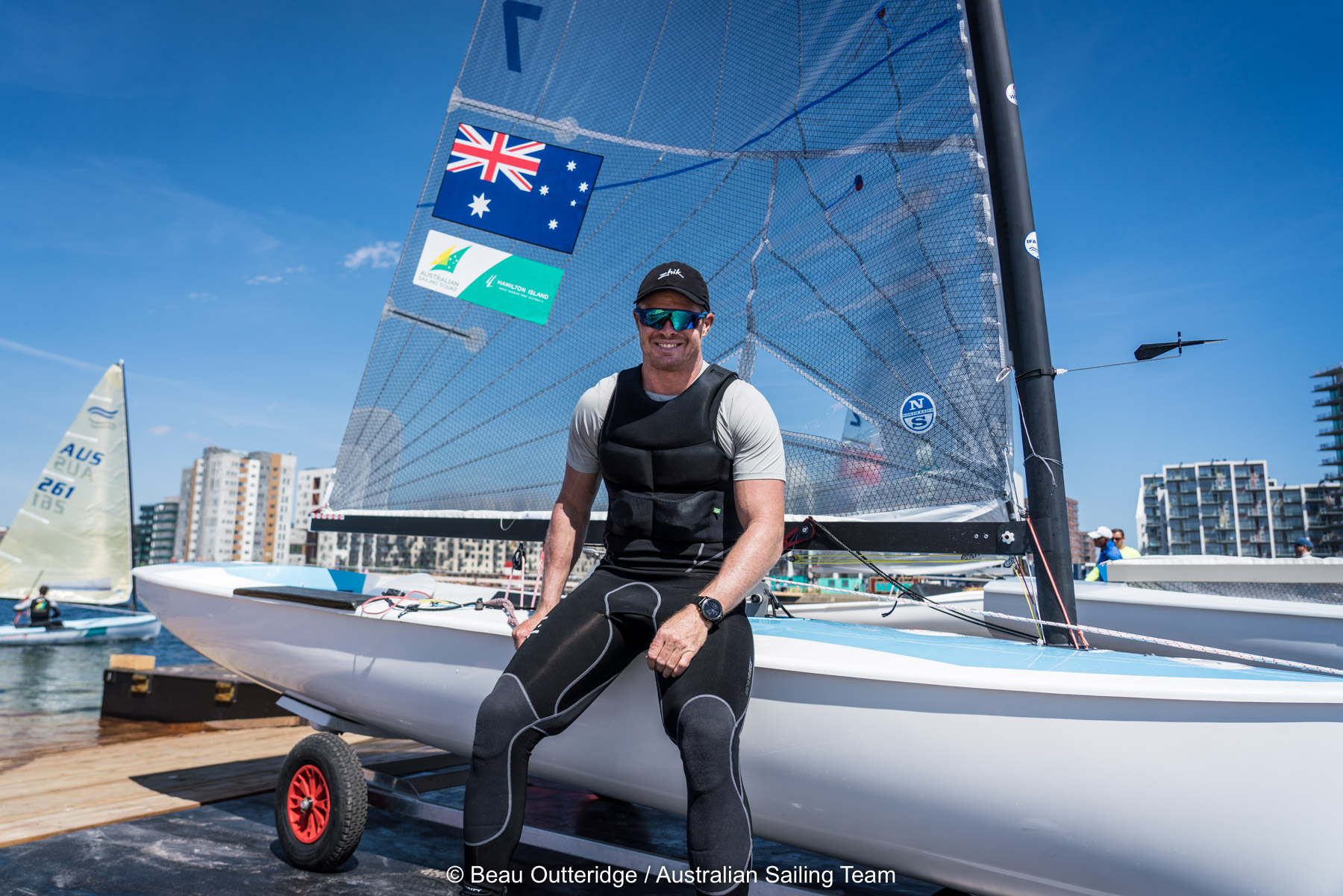 Iain Murray admits he’s unaware if Australia’s returning Olympic gold medallists have their eye on a spot for the Tokyo Games, but the Australian Sailing Performance Director has no doubt about the value of them competing at the most important regatta this side of 2020.

“We’re not 100 per cent sure what any of their plans are. But we’re making the most of their involvement in the team right now,” Murray said of Slingsby, Outteridge and Jensen.“I see it as a good thing for the other athletes. It’s just dragging the level of everyone up.”

Outteridge and Jensen won together in the 49er at London 2012 and claimed silver in Rio. Outteridge will compete at Aarhus in the foiling multi-hull Nacra 17 with his sister, Haylee Outteridge, a former world top 10-ranked 49erFX sailor. Jensen is back in the 49er, assisting Will Phillips, whose brother and regular crew, Sam Phillips, has been recovering from injury. And, Slingsby, Laser gold medallist at London 2012, has added some body weight and moved into the Finn class. Each of the trio has spent time on the professional sailing circuit, including the America’s Cup.

“These guys have had success in the Olympic arena, they’ve been plucked to the very top end of professional sailing and they’ve been in the very highest quality professional sailing teams. So, when they come back and bring all that experience with them, it’s a fantastic asset for the young people in the team to hear their experiences, the way they go about campaigning, the way they conduct themselves. For us, it’s just a win-win situation. They haven’t had a lot of preparation, but it’s great for the team. They bring that elite level, that professionalism, and the focus on how to win.”

Winning or performing exceptionally well will be an extra focus for all Australia’s representatives, as the regatta marks the first opportunity to qualify the nation for places on the start line at Tokyo. It is also “a big turning point” for the Australian Team and Squad, Murray said, as the policy moves from a team-first approach to a narrower view zeroing in on individuals who have genuine medal-winning potential at the Games.

“This is a really good check and balance for us to see how we’re going at a point where we narrow the focus of the team and start working on the specifics of improving the skills more individually, rather than having a strong group. So it’s quite a big turning point for us,” Murray said.

“Eventually we have to keep narrowing the focus down to the point where we have an athlete in a particular class – hopefully in all the classes. It’s becomes very performance-driven from here on. We have to put our concentration into particular athletes and focus on their skills, performance, equipment – whatever is required to help them to be the very best they can.”

Good outcomes at Aarhus will test the sailors’ skills to the extreme, as various weather conditions are anticipated.

“This is the first country qualification, so it would be nice to say ‘We’ve qualified for the Olympics in x-number of classes’. I think we have high expectations. But it’s going to be a tricky event,” Murray said.

“It’s a small venue, it’s known for unstable and inconsistent winds. It’s not like, say, Portugal or San Francisco or Sydney. So the results can get really mixed up. But that’s why it’s a good test of people’s skills and character.

“This is a multi-year journey and I think we’re happy where we are, in terms of Olympic preparation. We have some very established players holding their place in the world. We have the Lasers, where we’ve got Wearny [World No.6 Matt Wearn] and Tom at such a high level, which is great for Australia.

“At the other end, we’ve got some young and emerging people – the FXers, the Laser girls – coming up in areas that we’ve struggled with in the past.

“Then we’ve got the three medallists from 2012 back in the boats, so it’ll be an interesting event for us.”