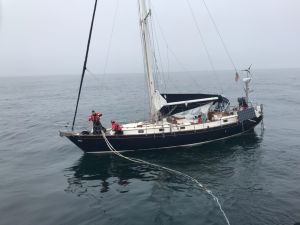 SAN FRANCISCO — The Coast Guard Cutter Barracuda crew found the sailing vessel Kelaerin, Sunday while on routine patrol near Fort Bragg more than 440 miles south-southeast from its position on June 16.

The Barracuda crew inspected the vessel’s seaworthiness and took it in tow toward the coast, where a Coast Guard Station Noyo River 47-foot Motor Lifeboat crew relieved the tow and moored the vessel at the B Dock in Fort Bragg, Monday morning. Coast Guard Sector Humboldt Bay watchstanders contacted the owners to notify them the vessel had been found.

The owners were reportedly sailing from Hawaii to Bellingham, Washington, in June when a storm rendered their vessel disabled and tore their main sail. The couple activated their emergency position indicating radio beacon, and a helicopter crew from Coast Guard Sector Columbia River in Astoria, Oregon, responded and rescued them. The sailors were transferred to emergency medical services personnel with symptoms of hypothermia.

After the rescue, Coast Guard watchstanders warned mariners about the adrift sailing vessel via VHF radio.

“The vessel was not under power and was completely at the mercy of the sea,” said Chief Warrant Officer Chris Ramp, the Sector Humboldt Bay command center chief. “The owners probably never thought they’d see it again. Thankfully, the Barracuda crew kept a vigilant eye on the water and spotted the vessel so they could bring it back to shore.”