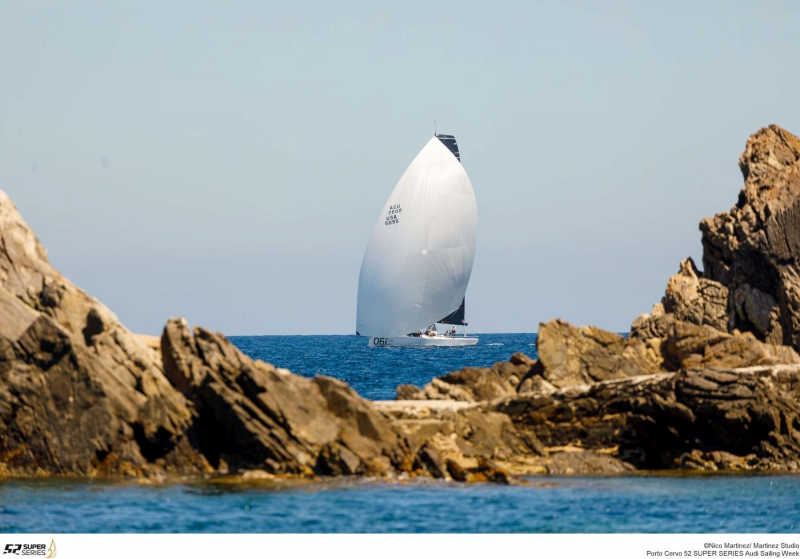 Porto Cervo, June 21st, 2017. The Audi Sailing Week, an event that is organised by the Yacht Club Costa, officially started today. The fourth event in the most competitive circuit of keelboat racing will end on Sunday, June 25th and currently sees Sled in first place, followed by Alegre and Rán Racing who finished in second and third places respectively today.

Punctually at 1:00 PM today the eleven TP52s that are racing in this event were at the starting line in Porto Cervo ready to start a 13.5 nm race that also included three windward/leeward legs for a total of almost 20 nm of racing. After the W/L legs the fleet headed out to the Golfo delle Saline then back through the Passo delle Bisce keeping Capo Ferro to starboard and ending in front of Porto Cervo.

The American team aboard Sled with its owner Takashi Okura at the helm was in the lead from the first downwind gate, with about 150mt on the second boat, the English team aboard Alegre with former America's Cup tactician Andy Horton. Niklas Zennstrom's Ran Racing placed third today.

Andrea Visintini, Sled's navigator, had these words: “It was clearly a good race for us. We stayed to the right on the upwind leg and this let us gain the lead. After that we had to fight off Alegre for the rest of the race. We're happy because we're coming from the previous event in Scarlino where we didn't perform as well as we should have. As a team we didn't give up and kept working and now we've gotten some results. I'm really happy with the way we have started this event.”

Azzurra, the boat that flies the YCCS burgee, got off to a good start but was penalised by the shifty breezes and finished in fifth place after a final battle with Bronenosec. Her historic rival, Quantum Racing, finished last after making a mistake approaching the final mark.

The cumulative overall circuit results see the German team aboard Platoon in first place after she placed seventh in today's race. Azzurra, with today's fifth place finish has recovered two points on the circuit's leader overall and is in second place, while Quantum is currently in third place on the cumulative circuit scoreboard.

Tomorrow, Thursday June 22nd, the 52 Super Series races will begin at 12 noon. Two windward/leeward races are scheduled to be held in medium to light winds. As always in this circuit, competition on the water is followed by a prestigious social programme on land: tomorrow will see the Owners Dinner at the Yacht Club Costa Smeralda's Clubhouse.