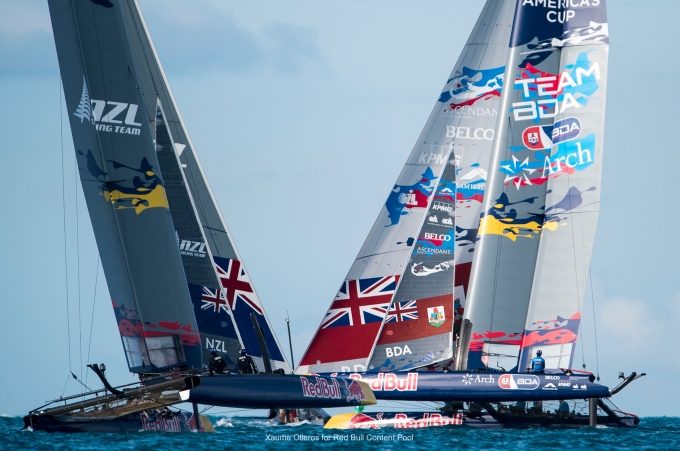 Day one of the 2017 Red Bull Youth America’s Cup Finals belonged to Land Rover BAR Academy who sit on top of the leaderboard heading into day two after two second places and a first place in the three races on day one.

Land Rover BAR Academy Skipper Rob Bunce summed up the team’s performance, saying, “It is the perfect start we were looking for and we're all delighted with our level of consistency. In all honesty, our main focus isn't to necessarily to win each of the races, it is more about keeping that consistency and finishing in the top three as much as we can because consistency is key.

“Getting off that start line cleanly has been the crucial thing for us and if we can do that then we're all confident we are quick enough to challenge for those top places on a regular basis.

“It is amazing to know there are only three races remaining but we will go into tomorrow as if today didn't happen. We will take all the positives from today but there are still things to learn and improve on.

“All of the team from Land Rover BAR, including Ben (Ainslie) have been incredibly helpful and supportive to us on and off the water. It's been amazing to have that support and hopefully we can do this for them as well.”

For the home of the 35th America’s Cup, the day started in fairytale fashion for local heroes TeamBDA whose incredible story in the 2017 Red Bull Youth America’s Cup continued in fine style when they won the first race of the Finals against their seven competitors.

Having given the packed Grandstand and all the TeamBDA fans in the America’s Cup Village a huge reason to cheer in race one, races two and three proved tougher for the young team and they end day one in sixth place overall.

Speaking about the team’s day, Skipper Mackenzie Cooper said, “It is hard to describe exactly how it felt crossing the finish line in that first race. We knew once we were round the last mark that we were going to win the race and you stop for a second and look up at all the people in the grandstand cheering. It was just an incredible feeling which fills you with so much pride, it's something I'll never forget.

“All of just looked at each other in disbelief, like we've just won a race in the final in front of our home fans! It was incredible. However, we had to stop ourselves from celebrating as we knew it was only the first race and each race comes around so quickly, so you have to focus again quickly.

“However, that first race was for our incredible fans and hopefully we give them more to cheer for tomorrow. We showed in each of the races that we are capable of competing against anyone out there and, even when we're behind, we can claw some places back, which is encouraging.

“Anything can happen, we've already seen that and so we won't stop believing we can win this. We will fix the mistakes we've made and come back stronger tomorrow.”

Roman Hagara, Red Bull Youth America’s Cup Sport Director said, “The last couple of years of preparation comes down to these two days of Finals for the eight teams taking part, and I’ve been very impressed by how everyone has competed today. It was hot out there on the Great Sound, and the winds were pretty light, but everyone got on with their jobs and the racing was fascinating.”

Hans Peter Steinacher, Hagara’s fellow Red Bull Youth America’s Cup Sport Director, added, “Obviously the whole of Bermuda went wild when TeamBDA won the first race, and we’re all so pleased they’re performing at such a high level. However, Land Rover BAR Academy really deserve our praise today. They sailed consistently and they made the most of the conditions. Behind them, there’s very little to choose between all the teams. Tomorrow we have the final three races and I think it’s safe to say that, whatever happens, it’s going to be edge of the seat stuff!”

It proved a fairytale start to the Red Bull Youth America’s Cup Finals for local heroes TeamBDA as they clinched a comfortable 34 second victory in the first race of the eight-team showpiece finals.

Managing to avoid the congestion at the start line, the Bermudian team put themselves in clear air throughout the race, gradually building a healthy lead and ultimately clinching victory as the packed Grandstand in the America’s Cup Village erupted in delight. Rob Bunce’s Land Rover BAR Academy and Jordi Xammar’s Spanish Impulse by IBEROSTAR finished second and third respectively to the hometown heroes.

Race Two was won by Team France Jeune who held off the challenge of the consistent Land Rover BAR Academy to claim the race-winning 10 points.

Behind them, a hard-fought battle ensued between the remaining six teams with Team Tilt and Artemis Youth Racing sealing third and fourth respectively, followed by Max Kohlhoff’s SVB Team Germany in fifth.

Defending champions NZL Sailing Team’s struggles continued as they had to settle for a sixth place finish, narrowly ahead of Spanish Impulse by IBEROSTAR. Meanwhile, Mackenzie Cooper’s TeamBDA were punished with a penalty on leg three of five, which saw them drop from third place to ultimately finish Race Two in eighth.

Land Rover BAR Academy capped off an impressive first day in the Red Bull Youth America’s Cup Finals, taking victory in race three and topping the standings at the end of day one.

Having sealed consecutive second-place finishes in the first two races, Rob Bunce’s British team built on that momentum to enjoy a win in the day’s last race, narrowly ahead of NZL Sailing Team and Artemis Youth Racing.