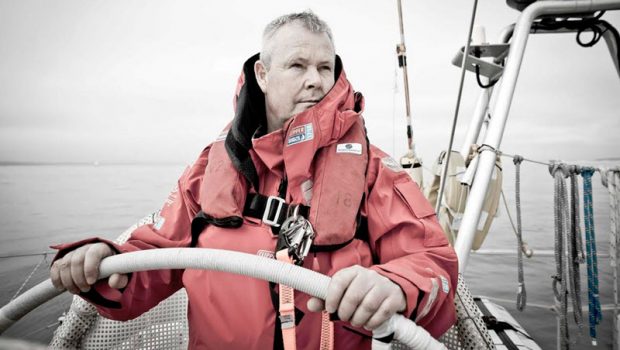 British sailor David Hartshorn, 53, from Chepstow, is to take over as GREAT Britain skipper for the remainder of the Clipper 2017-18 Round the World Yacht Race, replacing Andy Burns who has made the difficult personal decision to step down here in Airlie Beach, Australia.

Race Director Mark Light explains: “A very popular, highly competent skipper, Andy will be sorely missed by his crew, fellow skippers and all of us within the Clipper Race Office, however, we accept and fully support the difficult decision he has made.

“We all have huge admiration and respect for Andy and will continue to stand by him and wish him the very best in his future journey, both professional and personally.”

Andy’s decision was made due to personal struggles following the tragic loss of crew member Simon Speirs during the Southern Ocean Leg 3.

Andy and his crew were given full praise from the Clipper Race Office and wider followers for the way they reacted and supported each other.

Explaining, Andy says: “It saddens me to say that I have made the very tough decision to step down as GREAT Britain Skipper. The reality is I have struggled at times since Fremantle and no longer feel I can give my crew the competitive edge they need from a race skipper at this point in time.

“The support offered to me by the Race Office on a professional and personal level during this tough time has been phenomenal and I will always be extremely grateful for the opportunity given to me, but it’s not one I feel able to continue at this time.

“It’s been a pleasure sailing with those I have to the east coast of Australia and know they will give David Hartshorn the warmest of welcomes. I will follow the rest of their race and look forward to waving the team back into Liverpool full of shared pride of what has been achieved.”

On the choice to appoint David Hartshorn as the new GREAT Britain skipper, Mark says: “We carefully selected David as one of our original twelve Clipper 2017-18 Race skippers, so it was an easy decision to select him once again for the role.

“David put a great deal of time and effort preparing his campaign to lead a crew around the world in this edition of the race and through circumstances outside of his control, he was unable to fulfil this goal. It is therefore fitting and highly deserved that he will now once again have the opportunity to lead a team in this race.

“We all welcome David back and wish him and his new GREAT Britain team huge success for the remainder of their race together.”

The former Greenings skipper, David was medevac’d from his yacht on Day 5 of the opening Clipper Race leg after suffering a severed hand on board. Fully recovered, he had been preparing to return as Skipper for the start of the All-Australian Leg 4 in Fremantle, however the yacht’s grounding during the race to Fremantle resulted in the premature ending of the Greenings team’s campaign.

Reacting to his new appointment, David says: “Having got to know Andy closely as a fellow colleague and a strong competitor, I am of course firstly disappointed for him that he does not feel able to complete this circumnavigation with his team.

“However, I am grateful for the opportunity to build on the strong foundations he has set for his GREAT Britain crew, and am proud to have the opportunity to lead them for the rest of their campaign. We all look forward to sharing a drink with Andy back in Liverpool where we’ll celebrate completing the journey we started out on together.”

Formerly one of the most senior police officers in the UK, David has been a keen sailor for many years, accruing more than 55,000 nautical miles of sailing experience which includes nine ocean crossings.

Following retirement from his role in the Met, David decided to turn his hobby into his next profession, setting his sights on becoming a Clipper Race skipper. In preparation for his role, he signed up as a crew member in the Clipper 2015-16 Race as he sought to gain insights and experiences to support his leadership approach.