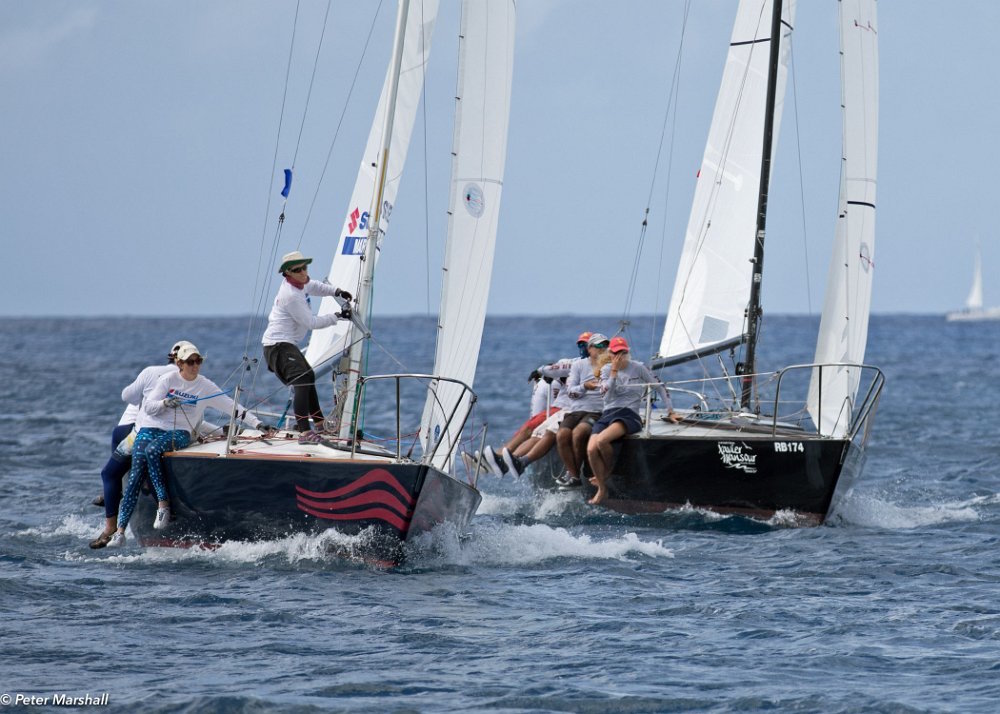 Bridgetown, Barbados: While final preparations are underway for the Mount Gay Round Barbados Race tomorrow, the J/24 fleet crowned its winner in the closely contested final showdown in the J/24 Coastal Racing Series at Barbados Sailing Week. .

J/24 racing in Barbados never fails to attract a quality fleet so it was no surprise that competition at the two-day J/24 series at Barbados Sailing Week reached new levels.

Overnight leader Robbie Yearwood from Grenada and his team on Die Hard continued their form with wins in the two opening races. However, a shredded jib halyard and spinnaker halyard in race three, while leading, almost cost them the series but they still managed fourth place in that race.

Thankfully they had done enough to secure the series with a race to spare, leaving Cyril Lecrenay and Bunga Bunga in second place just two points adrift.

A happy but exhausted Yearwood commented: “It was a tough day having to contend with gear problems but we gathered ourselves together and got it sorted. It was a bit of a disaster not being able to take down the jib because we couldn’t have re-hoisted it, so we had to sail with it all the time plus we had to use jam cleats on the spinnaker halyard and tie it.

“But there was so much tension that when we went to take it down it at the end of the run when we were leading it jammed and we sailed right past the mark. Funnily enough we didn’t actually have to sail the final race but we weren’t sure about our math so we did it anyway and really enjoyed it.”

Yearwood is now preparing the boat for the 134nm sail back to Grenada tomorrow. “Going home is easy because it’s all downwind but it will still take 24hour to get there.”

Elsewhere some competitors treated themselves to an afternoon of colonial indulgence at the specially laid on Regatta Surf & Turf Polo Match at Holders Polo Field, while others used the lay day to prepare for Barbados Sailing Week’s headline event – the Mount Gay Round Barbados Race.

This 60nm sprint around the Island of Barbados, which traditionally takes place on a public holiday to celebrate Errol Barrow Day (the birthday of the first Prime Minister of Barbados, and ‘father of independence), has sparked a lot of interest with many teams keen to have a serious attempt at breaking one of the 20 records and a chance to win their skipper’s weight in rum.

Its unique format has, over the last few years, attracted serious race teams using the event as a ‘warm up’ to the Caribbean race season. Leading the charge this year at the professional/performance end of the international entry list is CSQ, the 100ft multi-winged super maxi from Australia skippered by Ludde Ingvall a former round the world yachtsman, world champion and record holder, who arrived in town yesterday.

Charles Trevor Hunte, the current holder of the Windsurfer record with a time of 5hrs, 34mins, 55secs, on a Starboard Phantom Batwing 377 raceboard has some competition this year with Frenchmen Fabrice Cornic on a Fanatic, and Frederic Vernhes on a Starboard Phantom hoping to break Hunte’s record domination.

With foiling all the rage it is not surprising that, for the first time ever in the history of this race, four foiling kite surfers are taking part, which means there’ll be plenty of action around the coast for spectators.

Andreas Berg who sailed from Germany last year and broke the Singlehanded Monohull record is back to defend his title on his Dufour 44 Luna, and Mat Barker’s stunning Alfred Mylne 65 The Blue Peter will attempt to break the 6hr, 11min, 19secs Classic record.

The schooner and brigs contingent also sailing in the Classic category may be the slowest in the fleet, but the three imposing tall ships, for which this race was traditionally known, will grace the waters and provide a highlight for the thousands of spectators expected to gather at vantage points around the island.

Ruth, the locally built 33m schooner is a regular supporter of the race as is Tres Hombres, the 33m working brigantine that will be racing with a total of 20 barrels of rum on board.

Fabian Klenner – captain of Tres Hombres – said he and his 14-strong crew are really looking forward to the race with an aim to finish. “We’ve just loaded six barrels of rum from Barbados so we do have a bit more weight to carry.

“En-route here, we collected 14 barrels of rum from the Canary Islands and now we have six from Barbados. After this race we’ll be heading back to Den Helder in The Netherlands to deliver the goods.

“We have actually made it round the island once, the first year we were here about nine years ago but it does depend totally on the wind and current. Ideally we are looking for about Force 5 with relatively flat water so we can tack easily.”

Event organisers – Barbados Cruising Club in association with Barbados Tourism Marketing Inc – are also delighted to welcome STS Fryderyk Chopin from Poland, which at 54m, is the largest operating brigantine in the world and has a crew of over 50.

Making up the majority of the fleet however, are the cruising and race boats including three J/24s, a Russian Mini Transat 6.50 and Whistler, the J/105 that won CSA Racing Coastal Series.

Racing begins at 0700 with staggered starts just off Barbados Cruising Club. The slowest boats (schooner and brigs) will start first, and fastest boat CQS will be last to start at 1130. From there on, the fleet will make its way around the Island clockwise and return across the finish line from the east in the afternoon.

Spectators following the race can join viewing parties planned at prime vantage points around the coast. Head to East Point Grill – St Philip, Naniki Amphitheatre – St Joseph, or North Point – St Lucy. One of the most talked about locations this year on the west coast is the recently opened Nikki Beach Barbados. Here spectators are invited to view the racing as the fleet passes from 1100-1300 hours.