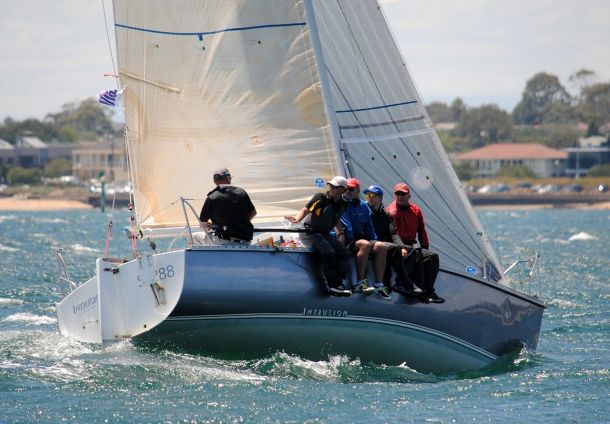 In an outstanding result, Intrusion won both races today to finish unbeaten in all but one of the seven race championship conducted by the Royal Brighton Yacht Club. Intrusion’s only loss was a second in race five, their discard, finishing well clear of the rest of the 20 boat fleet and giving Reinehr this third Victorian championship win in the S80 class.

Reinehr is a long time supporter of the S80, Victoria’s largest one-design keelboat fleet and his experience became obvious in a wide range of conditions over the three day regatta.

“Intrusion really excelled on the downwind runs today, reaching fantastic boatspeed as they surfed on the bay’s short steep waves with lots of breeze,” RBYC sailing manager and race officer David Staley said at the end of the regatta. “The S80 crews turned on some fine one-design racing… ashore they were a great group of sailors to have at the club.”

Today’s two final races, sailed in the morning, saw the fleet start race six in an 15-20 knot south-easterly breeze, gusting to 25 knots, then swinging to the east-south-east for race two. While the breeze eased briefly, it freshened again to 16-18 knots, with several sharp gusts of 25 knots, causing three boats forced to retire from the last race with sail damage.

Intrusion finished the championship with a net 6 points, second place overall going to Bill Feore’s Skipjack from Hobson’s Bay Yacht Club, the only other race winner of the series, with a net 19 points, just ahead of Escape (Tony Beck) from the Royal Yacht Club of Victoria on 22 points. Fourth overall was another Sandringham boat, Imaginer (Chris Byrne) which slipped out of podium contention with two ninth places today after an early scorecard of a sixth and four consecutive thirds.

Recycled Reputation (Tim Campbell) from Hobson’s Bay Yacht Club, bounced back with a final day third and fourth after being disqualified from race five, in which he placed third. The protest committee found Recycled Reputation had been at fault in a rounding mark incident with Bas Huibers’ Marek from the Royal Yacht Club of Victoria. Campbell was forced to carry the DSQ as the boat had been black-flagged in race four yesterday, thus dropping from a potential fourth place to 11th overall.

Champion boat Intrusion won each race today by the biggest margins of the regatta, but racing was close for the minor placings. In race six, second place went to Merak, with Recycled Recreation third and the Perth entry, Rock and Roll (Tony Strickland) a close fourth.

In the final race Intrusion won by more than five minutes but only eight seconds separated the next two boats, Good Question (John Robertson) and Skipjack, with Recycled Reputation 23 seconds further astern. Rock and Roll, Bon Vivant and Outlaw did not finish the race.

At the trophy presentation, S80 class president David Judge spoke of the growth of the class in Victoria, giving special mention to the all-women crew of Satie, skippered by Leo Eeckman, with this their first championship regatta, and to Tony Strickland and his West Australian crew of Rock and Roll who finished 10th overall despite being a DNF in race seven.