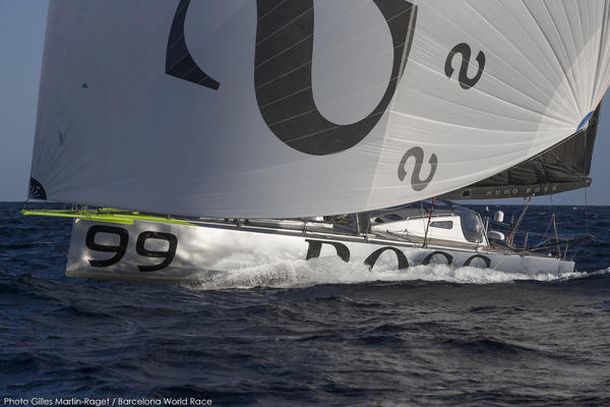 Alex Thomson and Pepe Ribes, the British and Spanish co-skippers, should pass another milestone of the Barcelona World Race, when they ease Hugo Boss into the Southern Hemisphere this Sunday night, first across the Equator, just as they were also first out of the Med and into the Atlantic nine days ago.

For the duo on the silver hulled VPLP-Verdier design which won the Barcelona World Race in 2010-11 as Virbac-Paprec 3, it will be keep their morale topped up along the way.

They have their nearest rivals splitting slightly west, separated away 35 miles this afternoon, while Hugo Boss was evidently feeling the Doldrums effects, slowed to 3.5kts for a period this morning and having to gybe east to escape from a nasty area of cloud activity.
Both Cheminées Poujoulat and Neutrogena might have picked up a smidgen more wind pressure to the west, but are still 25 miles behind Hugo Boss in terms of direct line distance to the Equator.

After 12 days of racing there is just six miles between Bernard Stamm and Jean LeCam’s Cheminées Poujoulat and the Neutrogena of Guillermo Altadill and José Muñoz.

In the strict terms of actual distance to the next  ‘mark’ Cape of Good Hope, Renault Captur, Jorg Riechers and Sébastien Audigane are actually closest but they are still 176 miles further to the north of the latitude of Hugo Boss. It is difficult to see Renault Captur make a good net gain from their more easterly position, – 140 miles east – especially considering how far to the west the Saint Helena high pressure is. The no go area of light winds which effectively blocks the more direct route to the SE and the Cape of Good Hope, will require the leaders to stay west and work quite far south to find the first departure of the low pressure train.

The race has remained tighter at the front than most had expected pre-start. There is likely to be just two to four hours between the first three as they pass nto the southern hemisphere. For Chilean José Muñoz it will be a return to his ‘home’ hemisphere, even if will be very early March before Neutr ogena might pass Muñoz’s neighbourhood.

The current routing for this group would have them pass within 200 miles of the Brazilian coast en route to the big south. Last edition two boats chose to stop into Recife, but as yet all of the top boats still report that they are at, or close to 100 per cent.

To that end, sleep and repairs were on the menu for Sunday as well as going as fast as possible. Anna Corbella and Gérard Marin had repairs prioritised ahead of rest. As soon as the breeze dropped yesterday the GAES Centros Auditivos duo set about their jobs list. Their biggest problem was repairing or replacing three mainsail battens and a small hole in their mainsail which was cause by one of the battens breaking. On top of that they needed to fix an autopilot problem. But, for having got through their repairs and so having their IMOCA 60 back at 100%, the pair were set to reward themselves with one of the freeze dried meals given to each boat by Girona’s Celler de Can Roca (voted the best restaurant in the world 2013) whose Michelin starred chefs designed and developed the meals.

“We said to ourselves that if we finished everything we needed to fix on the job list then we would eat one of the freeze dried mea ls from the Celler de Can Roca. We have some bottles of wine and one is for the Equator, but in about half an hour that meal from Celler de Can Roca is going to be gone, finished.” Corbella joked.

The Spanish skipper reflected how much higher the tempo has been for her and Marin this time compared to 2010-11 when she raced with Dee Caffari.

“I feel a lot more experienced than last time with Dee Caffari, the pace is higher and so, I suppose the problems come more and faster. Four years ago we had not broken many things, so this time the race pace maybe generates more problems. But that is fine. We have learned. It may not look like it but in the last 10 days we have learned a lot of things that will be good to know for the south and we have changed things that we should have changed earlier. It good to have these problems now and now later.”

Approaching the Cape Verde Islands, 700 miles behind the leaders, motivation is not an issue really for Na ndor Fa and Conrad Colman despite being effectively in a race of their own at the moment on Spirit of Hungary. Fa said today

“ You know, we are still very motivated even if we are not really in the group but on our own doing our own race, but we are in a race, we race. We keep our eyes on the fleet, we see what they are doing. We are motivated and we are doing our jobs, what we came to do. We are sailing at racing speeds, working at a racing tempo.”

Nandor Fa (HUN) Spirit of Hungary:“I have had some good sleep, Conrad was in the cockpit and now I feel good.
It is very difficult to judge how we are doing without the gennaker because there are no other boats around us, we feel we make some good speeds sometimes, not all the time, but we really don’t have boats to measure against, we really only see them on the informations. It looks like they are faster most of the time. But we don’t know exactly why. We try to change the rhythms a bit, to change sails, we have a sail chart now. Sometimes we are fast but not for a long time. It never seems to be for long. We do 15 or 17 knots for a while and after that we are back to 14. It is difficult for us to judge (how we compare) when we are sailing in a different wind.

“The boat? Is brand new and that means small problems all the time. All the time we are doing things with ropes. We are doing things with fittings inside and outside, we need some references and times. But the boat is good overall, I feel we need quite a long time to learn though. We are just at the very beginning. The other boats have had good, professional preparations. We did not have time to prepare for the race and we are here. So we see now small things to change.

“We are heading past the Cape Verde Islands, we have no plan for the Equator yet but we read the forecasts from Marcel van Triest and we will see what happens. But for sure the guys at the front seem very lucky that they can pass there quickly. I hope we will have the same luck and pass quickly.

“You know, we are still very motivated even if we are not really in the group but on our own doing our own race, but we are in a race, we race. We keep our eyes on the fleet, we see what they are doing. We are motivated and we are doing our jobs, what we came to do. We are sailing at racing speeds, working at a racing tempo.”

Anna Corbella (ESP) GAES Centros Auditivos:“At the moment it is grey, there is still some waves leftover after the strong trade winds. It is raining and the weather is warm. Now it is like 28 or 29 degrees. I don’t know about the wind too much. We have not paid too much attention to the meteo these last days, I hope we will get across easily. And I know the high pressure is big but we need to have some time to look now. Now from last night we are at 100 per cent after the repairs we did. So this is why we are happy ;-)”