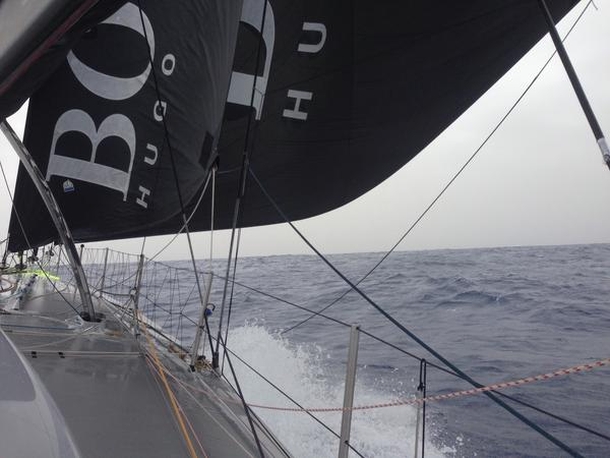 Hugo Boss leads the fleet across the equator in Barcelona World Race.

Lead by Hugo Boss at 0150hrs UTC this Monday morning, four IMOCA 60s of the Barcelona World Race fleet are now racing south in the Southern Hemisphere after crossing the equator in relatively quick succession.

After Alex Thomson and Pepe Ribes came their team-mates from the Alex Thomson Racing ‘scuderia’ Neutrogena, sailed by Guillermo Altadill and José Muñoz, who breached the Equator 1hr and 10 minutes later, about 50 miles to the west of Hugo Boss. Two and a half hours after Hugo Boss, and in the wake of Neutrogena, it was Bernard Stamm and Jean Le Cam who crossed on Cheminees Poujoulat. Then at 1020hrs UTC this morning – just 8hrs 30mins after Hugo Boss – Anna Corbella and Gérard Marin, passed over the Equator too on GAES Centros Auditivos.

Hugo Boss bettered the 2010-11 edition time, Barcelona to the Equator, by 25 hours, thanks to the combination of good NE’ly trade winds since the Canary Islands and a relatively easy passage through the Doldrums. Thomson and Ribes had their wobbles, spells yesterday in light airs which they  had to wriggle clear of, but this afternoon they were making 12kts in 15kts of SE’ly trade winds.

Now it is a drag race, a boatspeed contest to get south, as Alex Thomson explained today:

“It was a tough Doldrums crossing, much tougher than we thought it would be, but we have come out about 50 miles to windward, hopefully we will convert that over the next period of a week to ten days to 50-60-70 miles of forwards advantage. We have about 15-20kts, tight reaching,  relatively big seas, a few slams. We have had a lot of rest after the Doldrums. Now it is a bit of a drag race, a boat speed race, while we consider our options for the routing as we get further down and towar ds the south where we will turn left into the Southern Ocean. All’s going well and we are Super Happy.”

Speaking this morning Spanish co-skipper Pepe Ribes confirmed that they had stuck to their game plan rather than make any alterations when they saw their two rivals diverge behind them to make some westing. Leading into the Doldrums is never easy and they did feel some compression when they were slowed and Neutrogena and Cheminées Poujoulat could alter their course as the leaders had effectively flagged a calm area for them. Such are the perils of breaking into lighter airs as pacemaker.

But Ribes added that he and Thomson are happy with the leverage he feels they have gained being effectively 50 miles to windward of their rivals in the SE’ly winds. If they want to, he explained, they can sail lower and faster to cover any advance that Cheminées Poujoulat and Neutrogena make. Ribes speaks with the knowledge that their boat should be proportionately quicker:

“Recently they got a little closer to us, but we are in a good position, with a big windward advantage that we’re going to use when conditions are good enough for us to go faster. We must know how and when to profit  from it. We need to see when it is that we can put the pedal down.”

GAES Centros Auditivos are fighting back with good speeds today too. Their slowdown when they had to sail with no mainsail cost them a few miles but the immediate future of Renault Captur encourages debate. Jorg Riechers and Sébastien Audigane were recovering on a more westerly course this afternoon after being stuck in the east yesterday.

Riechers declared today that their option is 70 per cent precipitated by choice and 30 per cent by circumstances.

Their position, 140 miles still to the equator, may have to get worse before it gets better, relative to the boats in front. The German co-skipper re-affirmed the need to do something different when you are behind the main pacemaker group, but believed that they would be out of the Doldrums later this morning. That said they are making 9 knots this afternoon, but actually have We Are Water and One Planet One Ocean less than 100 miles behind them, in terms of north south.

The two Barcelona IMOCA 60s are enjoying t heir own spirited duel, a tussle to the Equator, with the older One Planet One Ocean Pharmaton clinging on 12 miles ahead and to the west of the Garcia brothers We Are Water, both duos now feeling the effect of the Doldrums now.

After removing a net or similar textile material from their keel, life is rosier for Spirit of Hungary, Nador Fa and Conrad Colman. They are trundling south at 13-15kts in 16kts of NE’ly trade winds, less than 50 miles NW of the Cape Verde islands, ready to pass about 60 miles to the west of the archipelago.