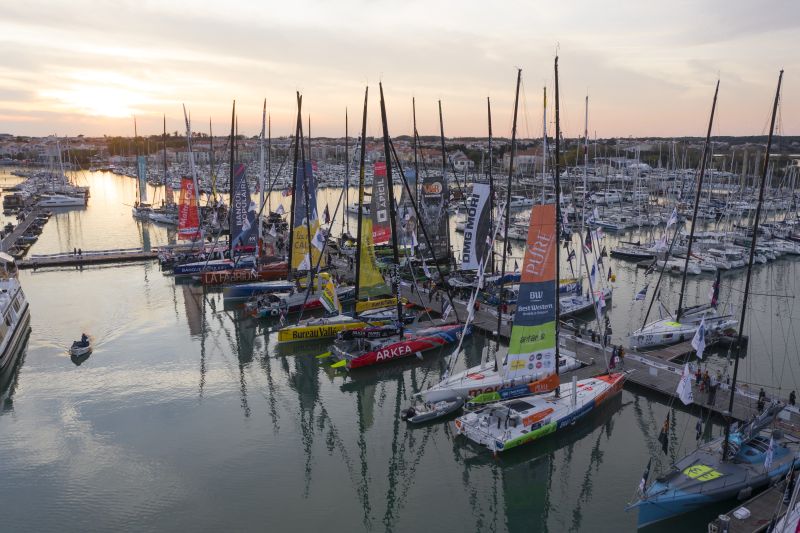 General view of the boats at the pontoons

Les Sables-d'Olonne, 24th October 2020: At one week since the Vendée Globe Start Village officially opened and with 15 days to go before the start, the expansive site at Port Olona, Les Sables d’Olonne has enjoyed great weather for the passionate crowds who have visited the famous dock and the 33 IMOCA race boats which are almost completely primed and ready for the Sunday November 8th 13.02 hrs when the start gun will sound.

If the capacity has been limited due to the health situation, and face masks and careful monitoring are the order of the day, the level of interest and excitement is every bit as great as ever before. Compared to recent previous editions perhaps a little more patience may be required to wait in line to get on to the pontoon, but the anticipation is rewarded by a 2020 Vendée Globe fleet of unprecedented size and a spectrum of ocean racing performance that has never been broader.

Until now there have been plenty of skippers around the dock and the village. The heroes of the race may be keeping themselves at a safe distance from the visitors but they are still out in force meeting their fans. Selfies are more carefully composed, but even in this all-too-digital age there are still touching letters written, drawings, good luck notes passed, flowers, soft toys, lucky charms, and questions from kids of all ages, like: ‘Why does Charal not just fall over?’

British skipper Sam Davies smiles, “I do enjoy this pre-start phase. It is kind of like the first real feeling of accomplishment to be here on the start line with your project ready, and there is always a special atmosphere with the skippers here. I am relieved to be here. It is maybe a little more subdued but that is to be expected.”

Technical Director of Alex Thomson Racing Team Ross Daniel, reported, “Alex sailed the boat for the last time before he went home to England after the last mandatory checks. We had a few sails come back and checked them. We have just a few final detail jobs to do. So the boat is ready to do the Vendée Globe and that is the position we wanted to be in and are in.

“We were a bit concerned how productive this period would be with the restrictions here and in fact we have got more done. We are in good shape.  Alex is isolating at home now with his family. They will not be able to come over for the start and so this is valuable time for them together. He will return on the 31st to start the final isolation before the start.

“We agreed a strict Covid policy with all our team and stakeholders from Day 1 and have had our plans and processes in place for a long time.”

Behind the scenes there are still jobs to do on the boats and time is taken to go out on to the water and make final checks.  Seventeen trips have been made in total. And this Friday there are a bunch more, checking sails, electronics, keel hydraulics, foil checks. These final sail tests are allowed until the end of next week. Sébastien Simon received his second foil on Thursday for his Arkea Paprec.

At the same time, security checks (to Offshore Special Regs Cat 0) to verify that all the required safety equipment is in place, up to date and working has been underway.

“Overall, apart from a few small teams that still have some odds and ends to complete, the boats are very much ready,” confirms Jacques Caraës, the Race Director of the Vendée Globe.

The skippers are preparing to isolate themselves in the company of their chosen ‘bubble’, most often their nearest and dearest. Skipper confinement is mandatory from November 1 but many French skippers will be stricter than the minimum and will return home.

Next on the official agenda for the skippers is the announcement, on October 30, of the second version of the Antarctic exclusion zone – the positions which will draw the line marking the ice zone which the solo skippers must not cross but which can be updated during the race in the event of new data – based on the latest observations made by CLS.