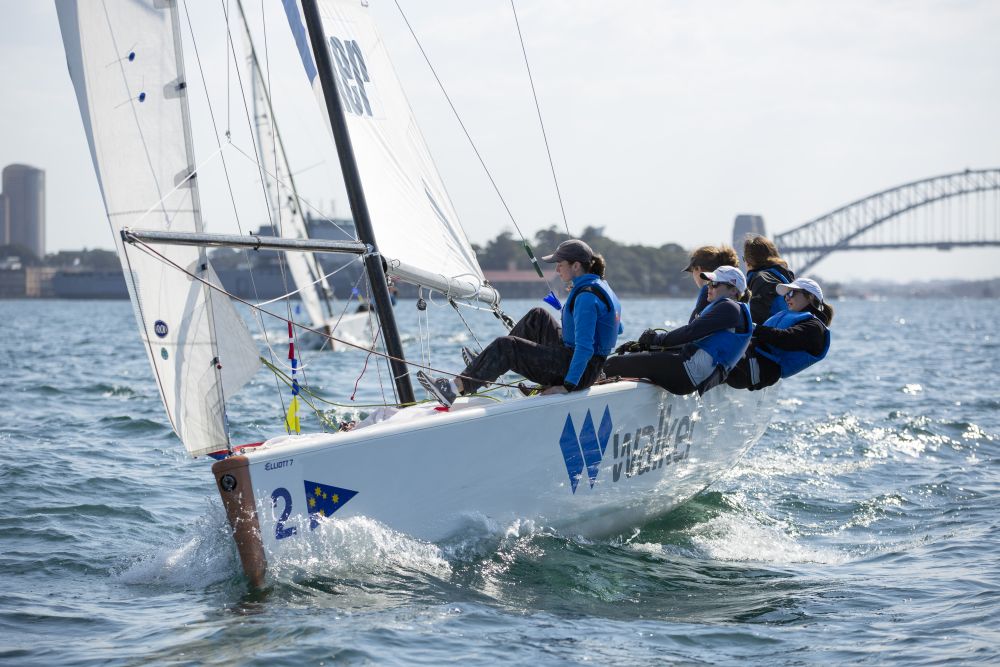 Day 1 of the Australian Women’s Match Racing Championship, hosted by the Cruising Yacht Club of Australia (CYCA), has delivered a perfect scorecard for sister combo, Juliet and Clare Costanzo from the Royal Prince Alfred Yacht Club (RPAYC). Along with their crew of Jess Angus, Ann Scholten and Emma Rankin, they were able to have a perfect day with a final result of 8-0 (wins-losses).

After a short postponement in the morning due to lack of wind, the race committee quickly fired off the races to make up time to finish the day on schedule with the first two of four round robins now complete.

For Juliet Costanzo, this is her first National Championship event as helm. Whilst her older sister Clare, who won the Australian Women’s title back in 2016 as helm, has traded the tiller for crewing and is proving to be just as valuable in her new position.

With a building northerly breeze, the race committee set up a spectacular course just off Point Piper with the wind peaking at 16 knots towards the end of the day. All teams handled the conditions well with tight racing throughout.

The chasing pack is currently led by the Royal Sydney Yacht Squadron’s (RSYS) Charlotte Griffin on 5-3. Griffin and her team are looking to build off their recent success in regattas over the winter period, as well as the training program out of their Kirribilli based yacht club.

Closely following in third is Royal New Zealand Yacht Squadron’s (RNZYS), Celia Willison. This week’s highest ranked skipper, at World #37 heading into the regatta, Willison finished the day on 4-4. Having finished runner up at the CYCA Women’s Match Racing Regatta earlier this month, Willison will be hoping to climb the leader-board over the coming days.

“The racing a lot of fun but stressful at times,” says Willison. “We’d really like to win it this week, we’ll take every race as it comes. We’re focussing on the top and beating Juliet, her and the rest of the rock-star crew onboard!”

India Howard, representing the CYCA, had a tough day on the water, managing two wins from her eight starts. With a new team onboard her Elliott 7 this week, she is hoping that the coming days will see better results. Tanya Kelly, representing Mooloolaba Yacht Club (MYC) rounds out the standings on 1-7.