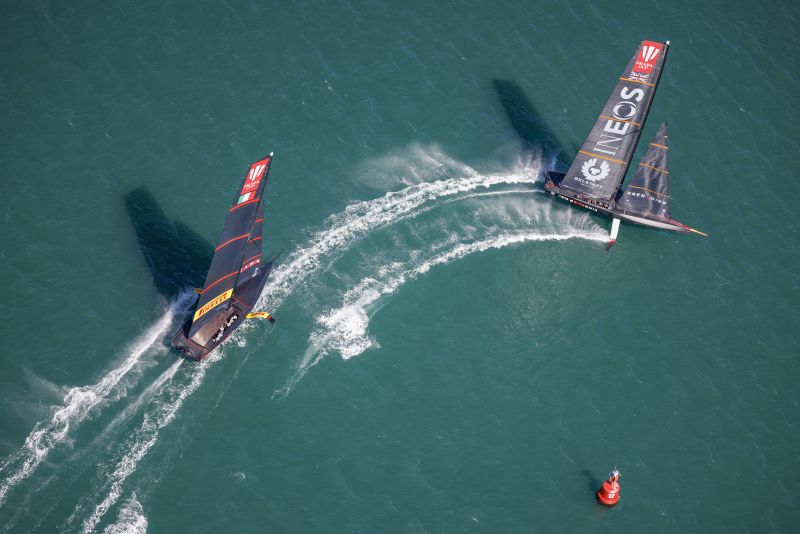 Today all the build up and discussion ended and the points started to count in Auckland as the first two races of the PRADA Cup officially kicked off.

INEOS TEAM UK went from zero to hero by winning both races with solid starts, smooth sailing and protecting their leads over their opponents, both American Magic and Luna Rossa Prada Pirelli Team respectively. It was a result few people had predicted before today.

Race course C – sheltered between North Head and Bastion Point – was selected for today’s racing to take advantage of the predominant Southwest wind at start time. The right side of the course was strong all day and Ben Ainslie and his INEOS Team UK knew it.

As the clock counted down for the first race of the day, the pressure was on for both INEOS TEAM UK (GBR) and American Magic (USA), but for the British there was no doubt that the stress of not having won a single race since arriving in Auckland was weighing heavily on the entire team. But when it came to crunch time Sir Ben Ainslie’s team appeared to have a strong game plan from the start.

As both boats entered the starting box there appeared to be little appetite for engagement on either side. With a minute to go both were out on the right hand side of the pre-start area. American Magic was the first to tack back on to starboard, choosing to take the lower route back to the start line and setting them up to leeward of their British opponents.

If Ainslie and Co had wanted the right-hand side of the course and the windward side of the start they had got it as the gun went.

Both boats had made a perfectly timed run into the start, crossing the line on time and at full speed. But as INEOS TEAM UK weas the first to tack off on to port to head for the right hand side of the course, there were the first hints that the British favoured this side of the race track.

By the top gate INEOS TEAM UK weas ahead by 11 seconds. From here, the British were able to pick the right-hand side of the course, which still had more breeze, while also keeping a loose tactical cover on their opponents. Meanwhile American Magic took the left hand mark at the top gate, a move that cost them time by the bottom of the first downwind leg.

As the first lap was completed INEOS TEAM UK had stretched out their lead to 19 seconds.

Another lap of the course saw a big stretch in the distance between the pair to 1min 8 sec after lap two. From there little changed, INEOS TEAM UK sailing confidently and accurately throughout to increase their lead to 1min 20 sec by the finish.

“That feels a lot better than six consecutive losses,” said skipper Ainslie shortly after the finish.“That was a good team effort.”

As the British and Italian teams prepared for their match, the breeze was continuing to build, reaching 16-22 knots at Bean Rock towards the top of the race course. If previous performances were anything to go by, these conditions were further into the British sweet spot and away from where the Italians have been most competitive.

But no-one was taking anything for granted. All three teams had worked extensively on their boats and sailing techniques. They, as much as the spectators, were eager to find out whether they had improved and by how much.

In the pre-start, INEOS TEAM UK entered the start zone from the left hand side, crossing Luna Rossa Prada Pirelli with ease. For the opening seconds neither team looked keen on engagement. As the clock counted down to the last minute and as both boats set up to come back to the start line on starboard tack a left-handed wind shift meant that neither could cross the start line on starboard. From their windward and ahead position, INEOS TEAM UK was able to tack on to port for the start line and cross ahead – a narrow leading margin perhaps, but one that the British team held as they headed up the first beat.

Once again, Ainslie and his tactician Giles Scott looked to work the right-hand side of the course where the breeze was still strongest. As they did so they were able to sail higher and faster than their opponents and force the Italians into their dirty air. This meant that Luna Rossa Prada Pirelli was forced to tack off and head towards the lighter conditions on the left-hand side of the course.

By the bottom of the first downwind leg the British lead had stretched slightly to 22 sec but, as the pair headed up the second beat the Italian strategy was emerging, staying close and waiting for an opportunity to pounce was the name of the game. It never happened.

Although they were able to whittle the British lead down to 13sec on the last windward gate rounding, by the finish INEOS TEAM UK had stretched out to win by 28sec.

Another dominant performance and a big turn around for a team that has bounced along the bottom since the start of racing last December.

SIR BEN AINSLIE – INEOS TEAM UK Skipper and Team Principal
“It feels a lot better than six losses or whatever was. We left it a bit late, nice to find the pace when it counts on time in this breeze.

“In the first race the right-hand side of the course was stronger, on North Head as we have seen. And in the races, a couple of weeks ago, it was a quite big feature. Giles did a great job calling the breeze and the guys sailing it fast and handling it. It was a team effort and I have got to say our entire team back on the dockyards, the designers, the engineers, the shore team, the boat builders, they had three epic weeks working to turn this boat around. So, this is for them and for our friends at Mercedes GP. As I said to the boys, we are long way out of the woods yet, it’s a couple of good races. Time to make the most of the momentum now.”

DEAN BARKER – American Magic Helmsman
“It was a tough race, we didn’t expect to be quite a big difference at North Head, that gave to INEOS TEAM UK the control. Also, they started a very good race today, they were going a lot better than we have seen on practice racing. Maybe it was a surprise for some, but we kind of knew it was going to be pretty close. We lost a couple of opportunities, areas straight away where we knew we could have done a better job keeping it close. Early days, one race, we would have much preferred to come with a win, but it’s a long series we need to keep improving. We will look back through at the race and look at the key decision moments, trying to understand how we could have executed that race better, one or two key areas which ended up to be the difference.”

JAMES SPITHILL – Luna Rossa Prada Pirelli Helmsman
“We were on time, we had a bit of time to kill, we thought we had a shot at hooking them actually, when he tacked in front of us, but then on the way back unfortunately we had a big shift of the wind. We went from killing time to be racing, to be in late, and from that moment on there were not too many opportunities, they raced really, really, well.

“Very early in the race we didn’t go damage control, we tried to keep them close and just wait for something to open up unfortunately the way the course was set up there weren’t really too many opportunity on the left-hand side, they rightly so protected the right, there was a couple of things up the top but we couldn’t find a way around, but full credit they sailed very well.”

The three challengers will spend the next four weeks fighting it out in the PRADA Cup to gain the right to go up against the defenders, Emirates Team New Zealand to race for the America’s Cup presented by PRADA in March.

Post race press conference will be held approximately one hour after end of the last race and will be streamed live on americascup.com, Facebook and YouTube.