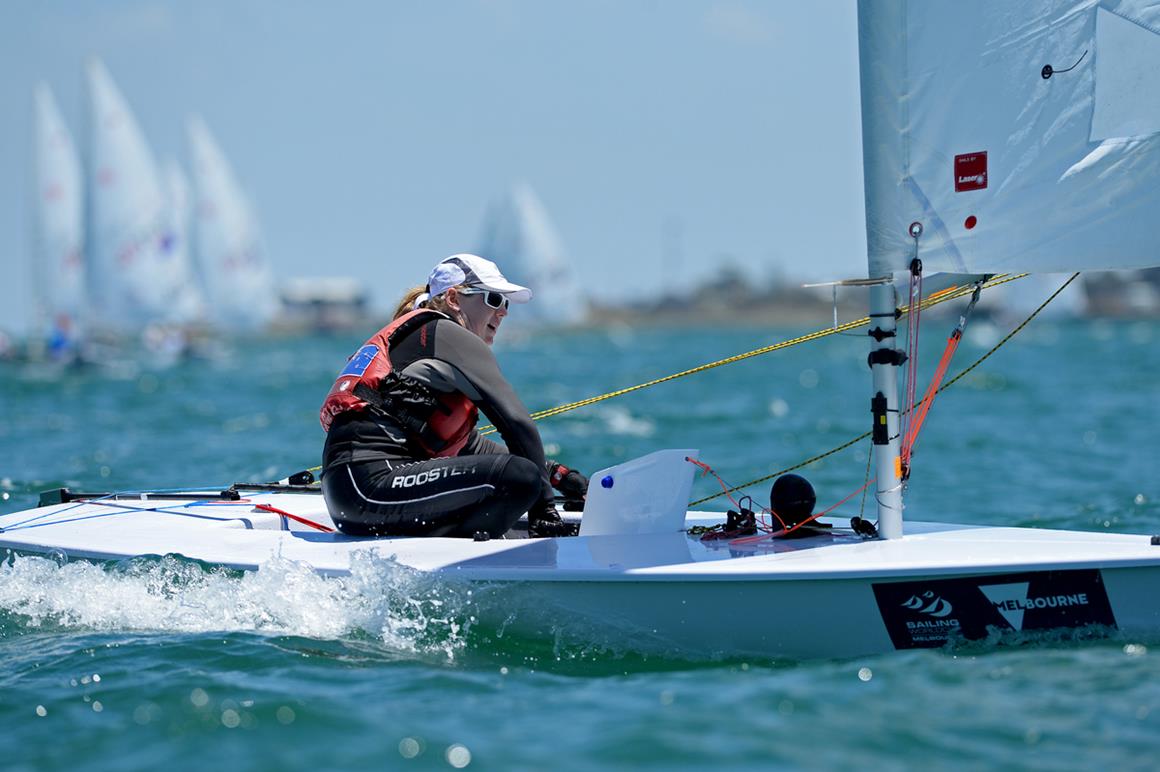 Melbourne put the whitest cloth and the best silverware on the table for the 900 plus Victorian, interstate and international sailors on day two of the Sailing World Cup Melbourne, the first stop of the six stage series.

The morning began with the hilarity of the inaugural Opti Olympic challenge when five Australian Olympic gold medallists and other high profile sailors took on some switched on Optimist kids in a novelty race that drew a great crowd at St Kilda sailing precinct for a fun start to the day. Out of the blatant cheating, paddling, tackling on the beach and water pistols, the youth sailors cleaned up the results.

When the serious competition began, sailors in the Olympic, Paralympic and invited divisions were greeted with light and cool winds and like yesterday the breeze moved into double figures as the day wore on, giving the afternoon session’s competitors 16 knots of cool SSE wind and stunning summer sunshine to play in.

Susannah Pyatt (NZL) surprised herself when she popped into the overall lead after smashing out two first places in the Laser Radial. “Today was similar to what we had in Oman for the Worlds with a steady breeze and nice waves. I have done a lot of training in similar conditions.”

In equal second on the progressive results sheet after four of eight races in the series is a disappointed Ashley Stoddart (AUS) who scored two seconds on the Port Melbourne course. “I set a goal to chase Susannah down, but she did a good job to cover me on the upwinds,” Stoddart acknowledged.

A quarter way into their competition Australian sisters Jacinta Ainsworth, 18, and Elyse, 16, are a single point and place apart from a total fleet of 20 sailing in the women’s Olympic class boat.

“It’s good that we are on the same level, over the last 12 months Elyse has really stepped up,” said Jacinta. “Being close is working in our favour.”

“This is a big year, we are putting a lot of effort into the Olympics,” said Cheng as he approaches selection for the second time having made the London team,finishing 15th.  “It’s always a balance trying not to burn out when I’m full time sailing. I’m pretty happy with my fitness, though it could always be better, and it’s at a level I can purely focus on my sailing.”

Current world and Olympic champions Daniel Fitzgibbon and Liesl Tesch (AUS) continued their dominance on the Hobsons course near the port of Williamstown, winning both of today’s races. Great Britain’s Alexandra Rickham and Niki Birrell stayed on trend with a 3-2 day to remain second overall. Third is Monika Gibes and Piotr Cichocki (POL).

The Netherland’s Rolf Schrama and Sandra Nap, having qualified their country for the 2016 Paralympic Games at last week’s World Championship out of the Royal Victoria Yacht Club, are desperate to achieve top results to go towards their national team selection. Today’s 6-4 results will require discussion with their coach Schrama admitted. “Our downwind wasn’t very good and our upwind were okay. It was great racing, but our results weren’t good.”

Carrie Smith and Jamie Ryan (AUS) are not giving any opportunities away and lead the 470 women’s fleet with a perfect score of four wins from four. It’s the same result in the men’s 470 division that is dominated by the Conway brothers of Alex and Patrick from Australia.

Josip Olujic (CRO) is proving a thorn in the side of local favourite and event ambassador Oli Tweddell (AUS) in the Finn class, the pair are divided by two points with three days remaining until the Gold Medal showdown on Sunday December 13, 2015.

Germany’s Florian Gruber is making merry in the consistent winds in the IKA Formula Kite division, posting another day of back to back wins in four of the six races to be leading by eight points overall.

The fluttering of 102 tiny white mainsails as the eager Optimist sailors headed away from St Kilda Beach heralded the start of the Invited classes section of the annual summertime regatta Melbourne has hosted for seven years. Drawn from clubs across Australia and New Zealand, the junior sailors completed two opening races in perfect conditions.

Both New Zealand’s Yachting Trust Youth Team and the Australian Youth Sailing Team are among the sailors utilising the Laser Radial (men’s and women’s), RS:X, 29er and large 420 fleet competition to prepare for the Youth Sailing World Championships in Malaysia later this month.

In the background, the silky Viper catamaran fleet of Australian, New Zealand and New Caledonian entries were enjoying reasonably smooth bay conditions and low flying their way around the course with plenty of pace and salt spray flying to the delight of the photographers.

The Open Bic’s 28-boat fleet and the Minnows shared a course area, showing off to their fellow French competitors in the ideal conditions and this afternoon the 29ers, Laser Radials, Laser 4.7s and Liberty classes had their turn.

A strong wind warning is in place for Friday for Port Phillip with forecast westerly winds increasing to 20-25 knots in the morning and by midday they could be as strong as 20-30 knots out of the west to south-west.