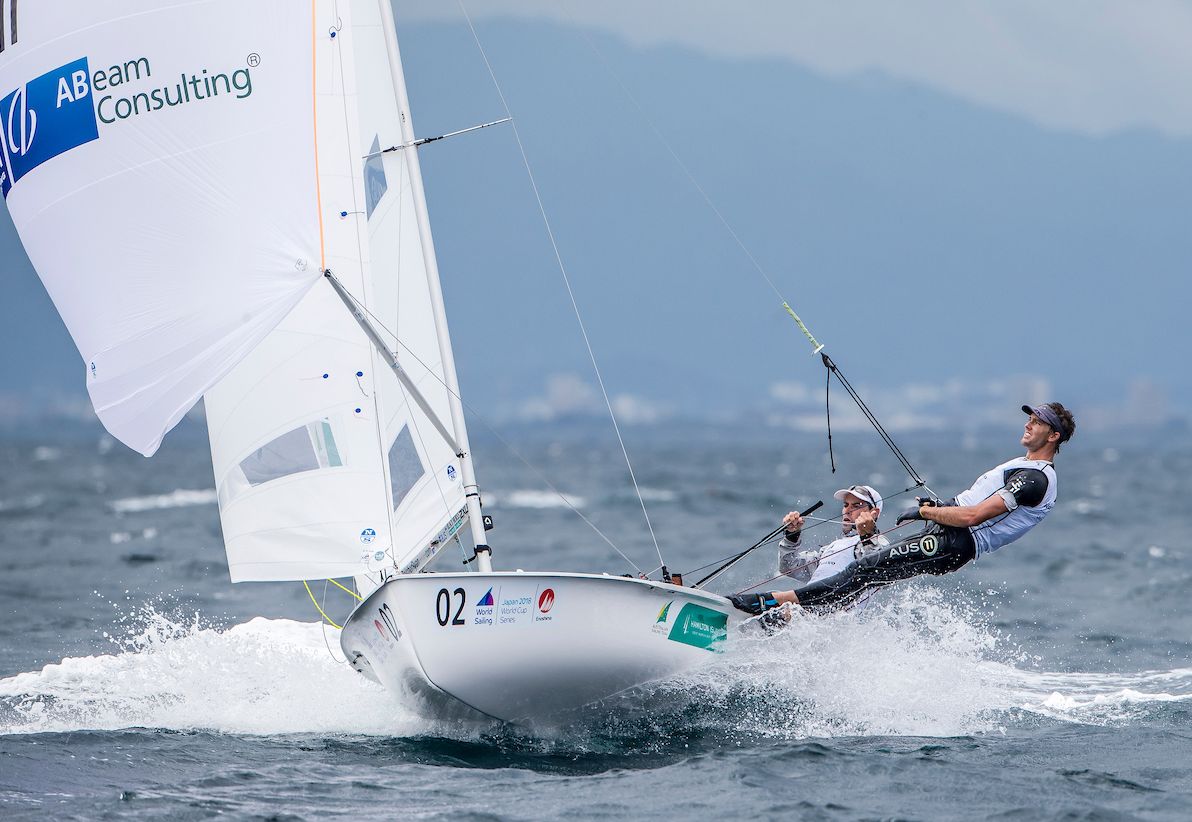 Mat Belcher and Will Ryan on their way to a second placing at the Enoshima test event. Photo ©JESUS RENEDO/SAILING ENERGY/ WORLD SAILING.

Japan’s Keiju Okada and Jumpei Hokazono won gold in the Men’s 470 as the World Cup Series Enoshima, the first major event on Tokyo 2020 Olympic waters, came to a tame finish.

The Japanese held an eight-point lead over Australian Mat Belcher and Will Ryan heading into the final day but, due to a light breeze, the fleet were unable to sail, with only the Laser and Laser Radial completing their Medal Races.

Racing was due to commence at 12:00 local time, but the expected sea breeze had not yet developed as cloud covered Sagami Bay. It wasn’t until 15:00 that a 5-6 knot south-westerly breeze developed, allowing the Laser to hit the water. By that time, the 470 Medal Races had been cancelled, handing the Japanese men and Afrodite Kyranakou and Anneloes van Veen (NED) gold.

Elliot Hanson (GBR) won in the Laser the day prior and Marit Bouwmeester (NED) claimed an expectant Laser Radial gold. As the Finn were unable to race, Nicholas Heiner (NED) was confirmed as the victor.

Across the week, Okada and Hokazono sailed with great consistency and as soon as racing was cancelled for the day, they could start their celebrations.

Japanese Sailing team leader Aiko Saito said, “We have at least four in the top ten and then we have one or two more. It’s our key class and I am very happy that the boys are doing well. For me, it doesn’t matter who wins, just as long as we are winning.”

Okada and Hokazono are originally from Japan’s southern island, Kyushu, but moved up to Enoshima to target Tokyo 2020. With beaming smiles ahead of the medal ceremony, they commented, “Winning the selection for the Japanese team is very tough but we’ll do the best we can. Winning here in Enoshima gives us an advantage and we are training here more than anyone else, so that’s going to give us confidence for the future.”

The Laser fleet were the first to set sail at 15:17 local time. Elliot Hanson (GBR) held an unassailable 43-point over the fleet going into the Medal Race, ensuring the title was his.

“It’s an amazing feeling to perform so dominantly on the Olympic waters,” said Hanson. “It didn’t sink in how disappointed I was to let my medal slip away at the World Championships in Aarhus until I got home.

“After a bad performance, there’s nothing better than another event to throw yourself into to bounce back, so I was really fired up for this one.”

Jean Baptiste Bernaz (FRA) won the Medal Race but it did not move him onto the podium. Matt Wearn (AUS), finishing in second, benefitted from Thomas Saunders’ (NZL) tenth to move into second spot, and Sam Meech (NZL) completed the medal line up.

Marit Bouwmeester (NED) won the Laser Radial Medal Race to firm up a top spot on the podium which was already all but hers.

Victory in Enoshima confirmed her place at Tokyo 2020 too, as the event acted as a qualification event for the Dutch Laser Radial squad.

“It was pretty challenging with the light winds and offshore breeze so I’m very happy with the result,” said Bouwmeester. “It’s great to secure my spot for the Olympics and now I can focus on putting together the best possible campaign I can. I’m going to try and spend as much time as I can in Enoshima.”

In a light wind Medal Race, Josefin Olsson’s (SWE) second and Emma Plasschaert’s (BEL) fourth ensured there was no movement in silver and bronze respectively.

Afrodite Kyranakou and Anneloes van Veen (NED) won gold in the Women’s 470 thanks to a consistent week of racing. The Dutch duo narrowly missed out on qualifying their country for Tokyo 2020 at the Hempel Sailing World Championships, but they demonstrated they can perform on Olympic waters.

From eight races sailed, the pair were in the top six in all but one, and finished three points ahead of 2018 World Champions Ai Kondo Yoshida and Miho Yoshioka (JPN). Benedetta di Salle and Alessandra Dubbini (ITA) completed the podium.

“We were really looking forward to having a fight with the Japanese and Italian teams,” said Kyranakou. “They’re pretty good on those conditions so it would have been a good test.

“It’s nice to know we already won but on the other hand it’s very productive to sail on Olympic waters any day.”

“It’s a little bit weird to win and not race but it’s nice,” concluded van Veen.

The Finn hit the water in an attempt to sail their Medal Race, but as the late afternoon breeze started to drop, it became unsuitable for racing.

As the clock ticked down to the 16:30 time limit, expectations were low as a breeze failed to materialise and, bang on time, the Race Committee called an end to a compelling week of racing.

“It was a great week for me, I was nine points behind at the start and on the back foot,” said Heiner. “I had a really solid week and I’m really happy with the way I sailed. I would have loved to have sailed today but it wouldn’t have been a fair race.

After a packed schedule of events throughout 2018, many of the sailors will now enjoy a period of rest and recuperation before heading to Miami, Florida, USA for the second round of Sailing’s World Cup Series.