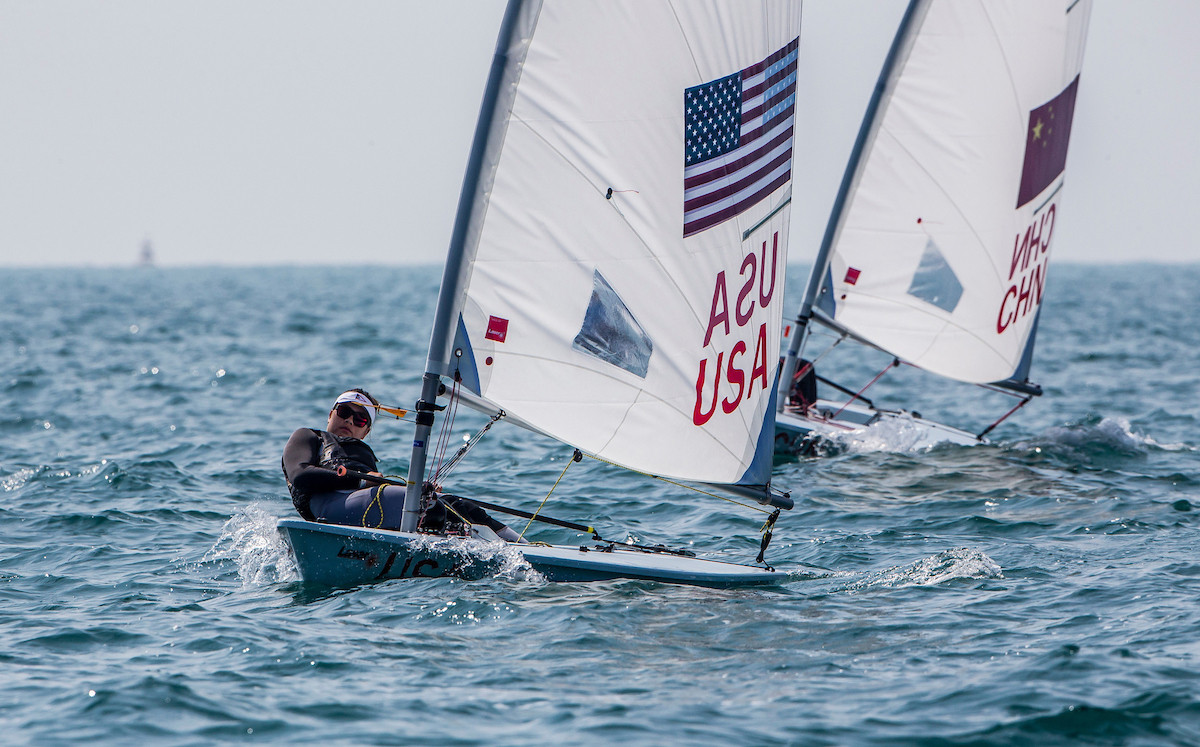 12/12/2017
USA's Charlotte Rose put out a strong signal of intent at the 2017 Youth Sailing World Championships in Sanya, China by dominating the day in the Girl's Laser Radial. Racing in the 40-boat fleet, Rose won both races, sending out a message to the defending champion Dolores Moreira Fraschini (URU) and 2017 Youth Radial World Champion, Hannah Anderssohn (GER).
Monday 11 December was the first day of competition for 374 of the world's best youth sailors, from 60 nations, racing across nine classes on Chinese waters.

Grey skies and a variable 6-12 knot easterly breeze were present across the four racing areas and sailors were looking to get off to a steady start.

Rose did more than this, she controlled the fleet sealing two convincing victories. The American finished third to Moreira Fraschini and Anderssohn at the 2017 Youth Radial World Championships in Medemblik, the Netherlands in August and although she was anxious about the scale of the event, she remains calmly focused and competitive.

“The Youth Worlds is the top sailors in every country from around the world so that gets me a little nervous,” commented Rose. “These sailors qualified to be here and deserve to be here as much as I am. Just knowing that puts a little of pressure on. But I'm also not scared of them. They're still a threat to me but I deserve to win as much as they do. As long as I work harder and smarter than them, I can beat them.”

Moreira Fraschini, a Rio 2016 Olympian and defending champion, kept in sight of Rose and posted a 3-2 to sit within three points. Annabelle Rennie-Younger (NZL) and Luciana Cardozo (ARG) are tied on 15 points in third.

Germany's Anderssohn received a scoring penalty in the opening race and followed with a 12th. She is currently 30th overall but the discard comes into after the third race so she will have opportunities to spring up the leaderboard.

Italy's Guido Gallinaro holds the early lead in the 51-boat Boy's Laser Radial fleet after a second and a seventh from two races.

New Zealand's Josh Armit won the opening race and after racing said, “It's a tough competition and great to be sailing against all these great guys. The second race I didn't have that great of a start and struggled from there to work back through the pack.”

Armit finished 12th in the second race and occupies fifth overall. Yoshihiro Suzuki (JPN) also took a race win and is in fourth. Caelin Winchcombe (AUS) was in second place after two races but was the subject of a late night protest which was upheld. The automatic 52-point penalty demoted Winchcombe to 28th overall. .

Norway's Mathias Berthet and Alexander Franks-Penty stole the show in the 30-boat Boy's 29er fleet. They won two races and finished third in the other and were full of smiles ashore after racing, “We were very nervous at the start because we didn't have a good feeling in the practice day. I think we managed this pretty well today,” explained a modest Franks-Penty. “We hit the good shifts and that was pretty important. Our starts were very clean and good. All in all, it's been a perfect day for us, it couldn't have gone any better.”

Margherita Porro and Sofia Leoni (ITA) were more impressive in the 20-boat Girl's 29er fleet, winning every single race. Zoya Novikova and Diana Sabirova (RUS) followed behind in the first two races but dropped to 12th in the final race of the day. They discard the 12th and are two points off the Italians. Maiwenn Jacquin and Enora Percheron (FRA) complete the podium but it is still the early stage of the regatta. Jasmine Galbraith and Chloe Fisher (AUS) are 12th.

There was plenty for the Chinese fans to cheer about in the Boy's and Girl's RS:X with Chinese sailors firmly placed within the leading bunch after three races. Ting Yu (CHN) leads defending champion Emma Wilson (GBR) by one point in the Girl's RS:X fleet following two race wins and a third. Giorgia Speciale (ITA) and Yarden Isaak (ISR) are in contention in third and fourth.

Australia's windsurfers are well down the fleet, with Hailey Lea 16th in the girls and Alex Halank 23rd in the boys.

In the Boy's 420, Ido Bil and Noam Homri (ISR) lead the pack after a race win and a second. Australia's Otto Henry and Rome Featherstone follow in second and USA's Thomas Rice and Trevor Bornarth are third. In the Girl's division, Israel's Linoy Korn and Yael Steigman lead Carmen Cowles and Emma Cowles by three points. Laura Harding and Eleanor Grimshaw (AUS) are 7th.

Belgium's Lucas Claeyssens and Anne Vandenberghe (BEL) were in firm control in the Nacra 15 winning two races and picking up a second in the other. The Youth Worlds is open to competitors under 19 which makes the young teams form even more impressive as Claeyssens is just 13-years-old.

Belgium holds the record for the youngest competitor at the Youth Worlds. At just 11-years-old, Henri Demesmaeker sailed at the 2012 edition in the multihull. He went on to make three further appearances and won bronze in 2016.

If Claeyssens and Vandenberghe continue their form, the young helm could become the youngest medallist at the event.

However, they will face opposition from Shannon and Jayden Dalton of Australia, who sit in second place only two nett points in arrears.
In the battle for top nation, at this early stage Israel leads Italy and the USA, with Australia in 4th.

Racing is scheduled to resume at 11:00 local time on Tuesday 12 December.