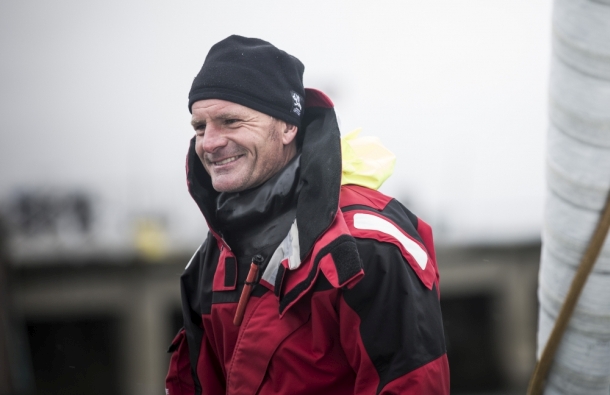 Leading French offshore sailor Sidney Gavignet, fresh from breaking a record last week, has been called up by Dongfeng Race Team (Charles Caudrelier/FRA) for Leg 7 of the Volvo Ocean Race from Newport to Lisbon.

The 46-year-old is also skipper of the Sultanate of Oman’s MOD70 trimaran, Musandam-Oman Sail.

With a largely Omani crew, they broke Steve Fossett’s 20-year-old Round Ireland course record last Wednesday, in a yet-to-be ratified time of 40 hours 51 minutes and 57 seconds.

Gavignet will take the place of fellow Frenchman, Eric Peron, on board Dongfeng. Peron is taking a breather before the final two European legs.

“He’s a Volvo Ocean Race expert, and I’ve been wanting to sail again with him for a long time. We sailed together 12 years ago and it went really well so I can only hope this leg will be just as good.”

Dongfeng Race Team are already in fine form, having won their second leg of the race from Itajaí, Brazil to Newport, Rhode Island, last week, to cut Abu Dhabi Ocean Racing’s overall lead to six points. They had earlier won Leg 2 to their home port in Sanya.

The team has also announced that Yang Jiru (English name ‘Wolf’) will take over from fellow Chinese Liu Xue (‘Black’) for the 2,800-nautical mile leg across the Atlantic, by far the shortest leg contested so far.

Gavignet’s experiences in Leg 7, which starts on Sunday, will be watched very carefully by Oman Sail’s CEO, David Graham.

“The movement of the Volvo Ocean Race to one-design racing has a far greater affinity with Oman Sail, our strategic plans of and its pathway to achieve them,” said Graham.

“We are observing the current race with great interest and in particular, the progress of the Dongfeng Race Team, given the similarities between our two entities.”

Dongfeng Race Team’s team director, Bruno Dubois, explained the reason for standing down Peron for the stage, after helping them win Leg 6.

“With complete transparency we can say that although the Chinese sailors have exceeded our expectations, they still have a long way to go,” he explained.

“This means that the non-Chinese sailors are naturally over-compensating for their lack of experience, spending more time on deck, more time explaining, teaching and above all more time supervising.

“Some of them are tired, and the rotation allows us to keep on top of this. Only Charles (Caudrelier) and Kevin (Escoffier) have not stepped off the boat yet since Alicante – and we don’t envisage that part changing.”

After the leg to Lisbon, the race will conclude in June with stages to Lorient (France) and then to Gothenburg (Sweden), via The Hague for a pit stop. The event will finish on June 27 with the Gothenburg In-Port Race.