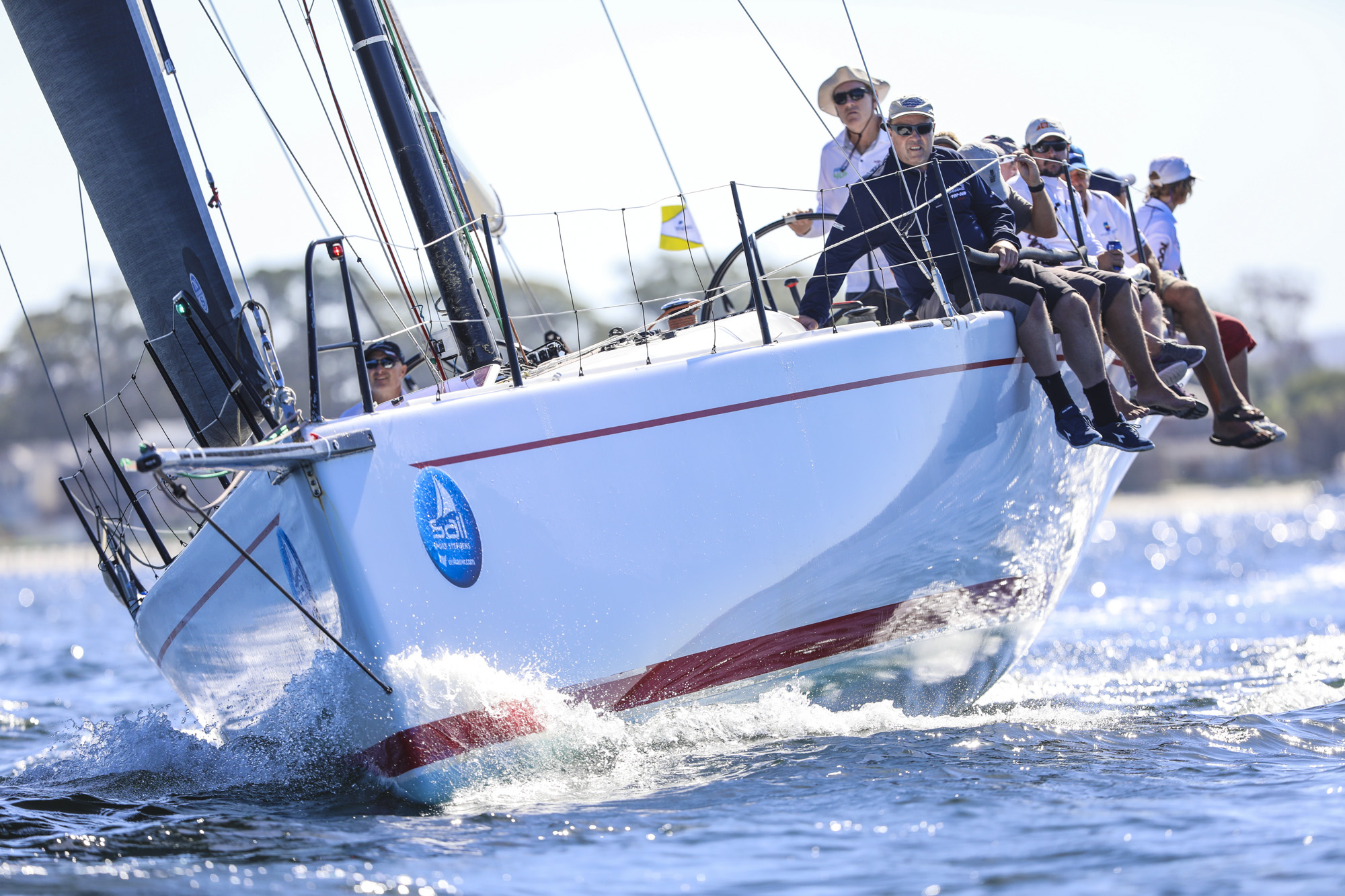 On the third day, the wind gods summoned a cracking breeze for the Sail Port Stephens fleet contesting the Commodores Cup – a 6-knot northerly at the start, building to around 18 knots mid-race as a remnant and reminder of summers past.

Course 9 was race officer Denis Thompson’s call, sending the largest-ever Cup fleet running down harbour under spinnakers and full sun, past the picturesque Anchorage Marina, then onto a triangular track in Salamander Bay.

After two days of relatively light airs and chop, it suited those with longer waterlines and a penchant for power reaching. Crew work also came to the fore as the 78 yachts descended on the marks in tight packs.

Starting the final day of Commodores Cup action, the Division 1 ball was firmly in the court of Pittwater flyer Showtime after two commanding and consecutive line-honour/handicap doubles, with daylight second.

Today, the Ker 40 had a slowish start at the breakwall end of the line but used its speed dominance to quickly slip through the field. When they saw the stronger breeze coming in they tactically gybed over to it and virtually ran to the leeward mark.

The crew tuned the boat into overdrive for the final beat, hitting 8.2 knots upwind.

“The guys did very, very well all three races,” co-owner Mark Griffith said. “We’ve started celebrating already down on the dock – I think we’re up to our sixth bottle of champagne and the music is blaring. Having a good time.”

Showtime was 12 minutes clear of Margaret Rintoul V across the line, and they finished the same way on PHS overall. Warwick Millers Beneteau 50 Lumiere, with Alby Pratt and Mitch White calling shots, took the win today to move into third overall.

Dennis Cooper’s Sydney 36 Amante, the overnight clubhouse leader in Division 2 with a slender 4-point margin, also became slightly buried at the start before edging into clean air. Nearest rival Austral, a Sydney 38, got away cleanly and the building nor-east seabreeze also brought third-placed Northshore NS-X Excapade well into the frame.

Austral, a Lake Macquarie yacht owned by Peter Mayo, finished sixth today to take the overall spoils. The Beneteau Oceanis 45 Antipodes stretched its legs to win the day and grab the second podium place, while Excapade held on for third.

“It feels great to be a winner after quite a few years here,” Mayo said. “It certainly wasn’t a forgone conclusion at the start of the day, but fortunately we put enough distance between us and Amante, while Antipodes came out of the blue to win.

“We sailed so well today, really coming into our own on the last beat and passing a lot of the Division 1 boats ahead. The week’s only half started for us – we’re also sailing on the weekend in Performance Racing.”

The Division 3 stage was primed for an upset as the two leaders, the Spider 22 Black Sheep and 26-foot Elliott 780 Clean Sweep would both struggle uphill against boats with 20 years less age and 10 feet more length. As a member of Port Stephens Yacht Club, Clean Sweep skipper Steve Liney at least had local knowledge on his side.

“The first day was frustrating, the second day was fun and today was smiles all around – not just because of the result but the fact we had a great breeze,” Smith said. “We finished first across the line in our division because the Sunfast loves going to windward in a breeze.

“Macscap was less than a minute behind at the finish, and that was the first time we’d seen the bow of his boat all day.”

The 14-strong Jeanneau fleet competed for their own class trophy with great camaraderie both on and off the water. Macscap led overnight from Frank Milner’s Sun Odyssey 349 Pinta Bay but Steadfast overtook both.

Thursday April 12 is a layday, then Sail Port Stephens puts on its serious face from Friday to Sunday. The on-water program includes the Garmin NSW IRC Championship, starring Wild Oats X, Hooligan, Quest, Nine Dragons and Philosophers among the 21 starters.

There’s also the Australian Sports Boat National Championships, Super 12 State Championships with a record fleet of 15, plus a Performance Racing and Performance Cruising Series for the Port Stephens Trophy.