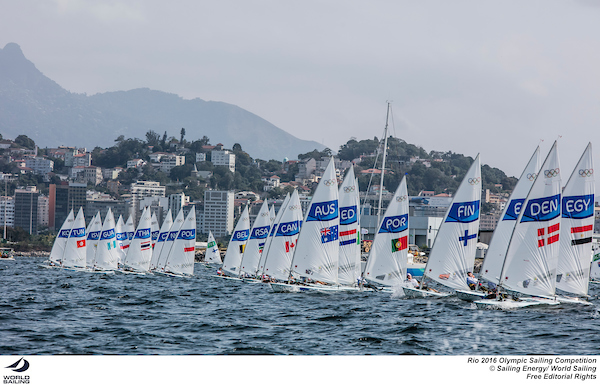 Tom Burton gets off the line well at the pin end. Photo Sailing Energy/World Sailing.

With 46 boats on the startline and the wind gusting from five to fifteen knots and swinging by up to 10 degrees, a good start was always going to be important as the first race of the Lasers got underway. However, the sailors were too eager and a general recall was sounded.

Most of the pre-race favourites got away well at the re-start, with double world champion Nick Thompson (GBR) and five times Olympic medallist Robert Scheidt (BRA) launching from the pin end while training partners Tonci Stipanovic and London silver medallist Pavlos Contides doing best at the pin. Australia's Tom Burton was caught out mid-line and blown out the back.

Burton fought back to be mid-fleet half way up the beat but a huge wind shift favoured those who had stayed left, leaving Thompson and Scheidt in trouble at the back of the fleet. But their woes were nothing compared with Burton, who misjudged a cross and did a penalty turn “just in case”.

Stipanovic was first around the top mark, followed by Sergei Komissarov (RUS). These two would take advantage of the clear air at the front to race away to a huge lead that reached 150m by the finish, with the Croatian taking the honours.

Behind them the continuing wind shifts played havoc with the placings but Rutger van Schaardenburg (NED), Julio Alsogaray (ARG) and Contides handled them best.

Thompson showed why he is the current world champion, fighting back from the dire position of 26th in which he found himself at the top mark to work his way back to finish ninth. He was especially strong downwind but also made big gains on the second beat.

Scheidt and Burton also improved throughout the race. Burton was third to last at one stage but a very good second beat saw him cross the line in 18th. Scheidt went from 29th at the first mark to finish 24th

The second race started in similar fashion, with Thompson tacking on to port at the boat end. Scheidt and Stipanovic were in clear air in the middle and it looked as though Burton was in trouble again, well out to the left-hand side of the course.

Once again wind shifts changed positions dramatically and at the first mark the order was Brazil, Virgin Islands, Korea and Guam who had established a lead. Burton had worked his way up to 9th, Contides was 11th and Thompson was in trouble back in 29th.

The snakes and ladders continued as the wind kept rising and falling, dying completely at one stage as the bulk of the fleet rounded the top mark.

Scheidt raced away to take the win from Alsogaray and Sam Meech of New Zealand, with Cy Thompson of the Virgin Islands in fourth and Stipanovic fifth.. Burton was eighth, Thompson 17th and Contides 31st.

Only three sailors managed to avoid double figures in at least one race and understandably that gives them a good lead. Alsogaray (4,2) and Stipanovic (1,5) are tied on six points while the Russian (2,9) has 11. Cy Thompson is fourth on 17, followed by Jean Baptiste Bernaz (FRA) on 21, Meech on 22 and Scheidt on 24. Van Schaardenburg (24), Colin Cheng (SIN), Tom Burton and Nick Thompson, all on 25, make up the top 11.

When Pavlos Contides pushed Tom Slingsby for the Gold at London 2012, Slingsby said that he is a good sailor who takes risks. They paid off for him in 2012 but today there was little joy and he sits back in 19th place, 32 points behind the leaders.

“It was pretty crazy out there,” Burton said. “I got two decent starts but it could have been a better day.”

On the problems with the cross he commented: “It was a bit of a brain explosion. I thought I'd crossed (clear ahead) but did a spin anyway to be safe.”

Conditions for tomorrow promise to again be difficult and today's front-runners could find themselves at the wrong end of the fleet.