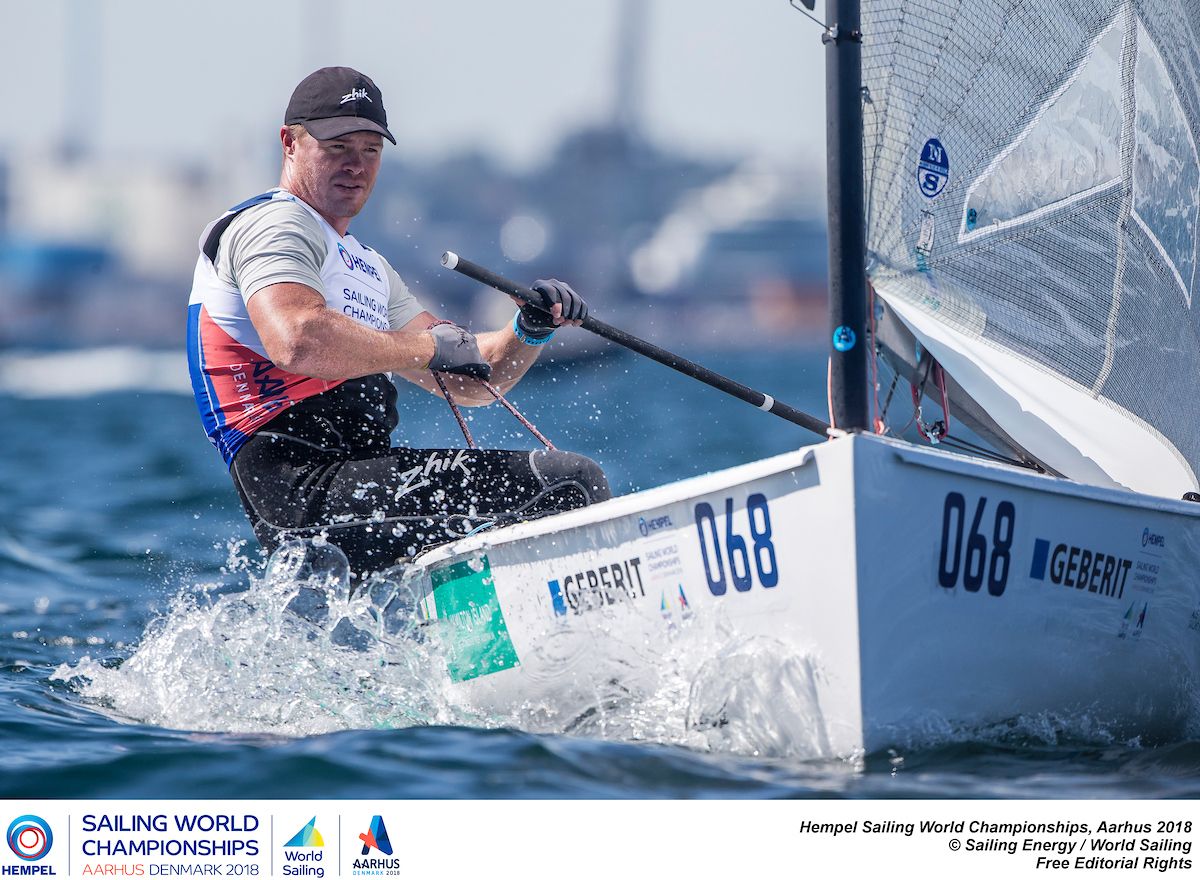 Tom Slingsby in the Finn at Aarhus 2018. ©JESUS RENEDO/SAILING ENERGY/AARHUS 2018

Australia's Laser legend, Tom Slingsby, tells us about what it's like getting back into Olympic racing after six years out, how the weight-gain diet to compete with the Finn giants has been going, and whether his America's Cup plans are really over for this cycle.

What's brought you back here to the World Championships?

TS: Well, fortunately the Australian Sailing federation has given me the opportunity to race against the best in the world.

Unfortunately, I haven't had enough time, I've only been able to train for a couple of weeks at a time. So far we've had shifty, unpredictable conditions, which is good for me I guess.

How's the weight gaining programme going, you were 88kg a couple of months ago?

TS: I've been trying to put on weight. I'm 91kg, most of the guys are around 100kg. If it's light and shifty stuff I could be pretty good, but the forecast is for stronger and stronger winds.

How many times have you been in the Finn before?

I spent a month and half in the Finn last year and did Sail Melbourne but didn't have any sailing after that.

Is this a serious push for Tokyo 2020 or more keeping your eye in?

It's only keeping my eye in. I've only planned to the end of this regatta. I'll make some decisions after this. I'm just enjoying racing again.

Has it been hard psychologically coming back not at the top of the fleet?

It is tricky for me coming back into it. If I had just finished a Laser Olympic campaign and moved to the Finn, I'd be doing well but I haven't been a Laser for six years. I've been sailing foiling boats ever since then. There are things I've forgotten after being on America's Cup boats. This is the first time I've been fleet racing since the London Olympics.

I've been match racing and here we're in a big fleet. And I'm not in the position in the fleet I'm used to. Even the worst guys in this fleet are extremely good. These guys are just sailing the Finn day in, day out.

Is your bid to create an Australian America's Cup campaign for this cycle definitely over?

Yes, unfortunately we weren't able to secure enough money for us to do Australian campaign.

Would you join another campaign (Slingsby was part of last two USA Oracle Tam USA winning, then losing the Cup)?

At this stage I won't be competing in this America's Cup campaign.

After six races at the Aarhus World Championships, Slingsby was in 37th position with a best result of 11th. He was the second-placed Australian behind Jake Lilley (23rd) and eight points ahead of Oliver Tweddell (41st).