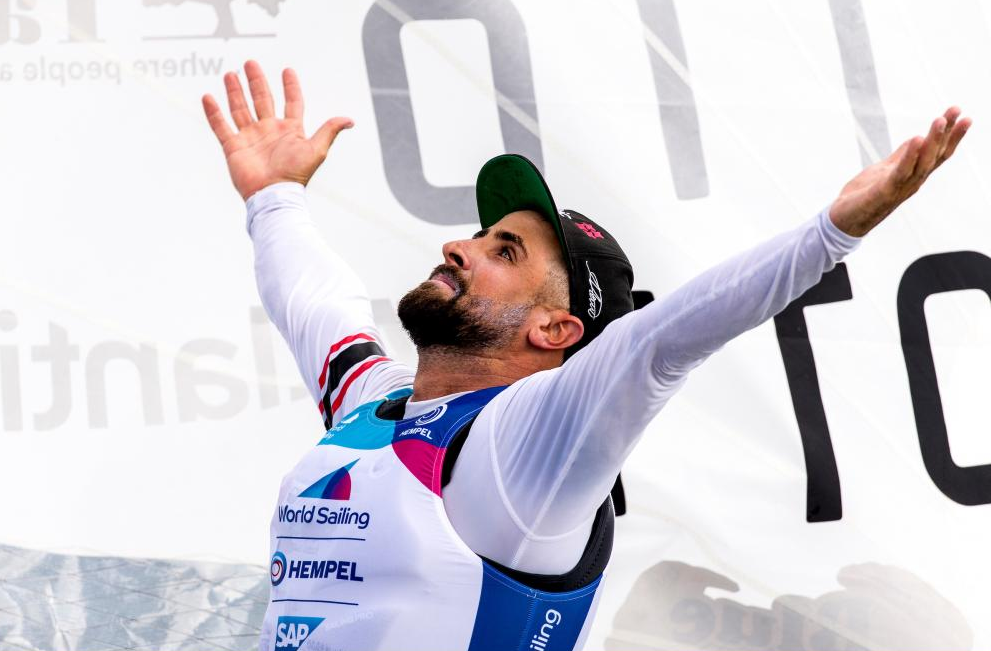 An elated Andrew Lewis is headed to his third Olympics

Miami got a taste of Olympic class sailing at the highest level this week, and on Saturday champions were crowned at the 2020 Hempel World Cup Series Miami.

Sailors from around the globe convened in South Florida this week with North American Olympic qualification at stake with the Tokyo 2020 Games only six months away.

The top 10 entries for each of the seven classes qualified to race on Saturday for a chance to improve their standing, and perhaps, earn a place on the podium. Earlier start times were slated in order to capture the morning breeze.

Hempel World Cup Series Miami was the final opportunity for North American nations to qualify for the Tokyo 2020 Olympic Games across the 470, RS:X, Laser, Laser Radial and Finn fleets.

Six of seven places had virtually been decided heading into today’s Medal Races with Mexico sealing places in the Laser Radial, Finn and Men’s RS:X. Canada picked up the Women’s RS:X and Men’s 470 place and USA captured the Women’s 470.

A fight was on in the Laser between a hard chasing Canadian pack and Trinidad and Tobago’s Andrew Lewis with the latter prevailing in dramatic circumstances.

Stefano Peschiera of Peru jumped from second to first with his win in the Medal Race to take the gold medal in the talented Laser class. Argentina’s Francisco Garagna Rigonat dropped to second place to earn the silver medal and Enrique Jose Arathoon Pacas of El Salvador took the bronze.

Meanwhile it was an emotional battle for Peschiera, as he booked his place at Tokyo 2020.

“I couldn’t do any type of match race or any complicated strategy to try and get the guy in first to have a bad race,” said Peschiera, the gold medallist.

“I had to focus on my own race. All I could do was make him nervous at the start and that was about it. All I had to do was put two boats between the guy in first and not let the guy in third finish five boats ahead of me, so that was a bigger gap. That’s what ended up happening.”

Lewis, a two-time Olympian, held the advantage heading into the Medal Race for the Tokyo 2020 North American spot and after a Laser start and a penalty it looked like his chance to qualify slipped away. However, a race abandonment gave him a second chance and a better understanding of how his rivals would face off against him.

In an up and down race he placed fourth which saw him finish fourth overall, ahead of the Canadians, to book his ticket to Tokyo.

“Olympics number three – here I come – amazing,” said Lewis after the race. “It was hard out there – five Canadians in the Medal Race. I don’t think I’ve ever seen a Medal Race with that many sailors from one nation.

“Five of them were trying to prevent me from getting one position. Three of them could overtake, and at one point during the race, one of them had it. One went left, one went right, and one nearly won the race. I wanted to push for the bronze medal, but in that position, I didn’t want to take the risk.

“I’m really happy for my training partner from El Salvador to win the bronze,” he added. “I was able to protect against the two Canadians behind me and catch the one in front. If I’m not mistaken, for half the race, the Canadian had the spot as he was in first and I was sixth or seventh.

“I kept telling myself, ‘Andrew, stay calm and go, stay calm and go.’ I was catching the one in front and the ones behind were catching me. What a nerve huh. I’ve been fighting for this since 2018 in Aarhus and thanks to the Lord, this is a special one.”

American Laser Radial athlete, Erika Reineke put the finishing touches on her gold medal performance today. She was fifth in the Medal Race to win the regatta by six points over Vasileia Karachaliou of Greece.

Reineke had a narrow two point lead over Karachaliou and Italy’s Matilda Talluri entering today’s finale. The race featured several penalties, including one on Karachaliou on the final downwind. Karachaliou gets the silver medal, while India’s Nethra Kumanan took the bronze after winning the Medal Race.

“Off the start I felt really good,” Reineke said. “I tacked and I was at the front of the race and then I messed up one shift and my competitors split from me. Vasileia played the first beat extremely well and I tried to keep my head in the game and not give up.

“On the last downwind I covered her and unfortunately she got a flag, but that’s the sport. I had to beat her [Vasileia] in the race and the Italian [Talluri] was also very close so I just went out trying to win the race.”

Reineke was ecstatic to win her first race of 2020. “It feels really good. I’m still trying to get my head around it, but it feels great. The nerves got to me during the race. I dropped my tiller extension during the race, and I had bad mark roundings, but now it’s great. I couldn’t have done it without Steve [Mitchell], my team and support.”

The Men’s and Women’s RS:X classes also concluded their week with today’s Medal Races and on the Men’s side it was Pedro Pascual of the United States winning his fifth race of the regatta to dominate the fleet and take the gold medal by 19.5 points.

Pascual received the US Sailing Team’s Golden Torch award for the top performing American at World Cup Miami. He becomes the first windsurfer to ever receive this distinction.

“It’s awesome to win a World Cup,” said Pascual. “It’s my first time winning an event on the senior class. It was really hard to stay consistent. We had really different conditions. On the first day we had light wind and then we had a couple of days where it was strong.”

“This is our second event of the trials and I’m leading. We have one more event in Australia – the World Championships and that will be the last one. Hopefully I do well in that one too. Right now, I’m concentrating on qualifying for the U.S. Olympic Team and then I’ll start training and I’ll see where I can go.”

Mexico’s Ignacio Berenguer was the silver medalist and qualified Mexico, and himself, for the Olympics in the Men’s RS:X. Juozas Bernotas of Lithuania captured the bronze medal.

It was a great day for the Women’s RS:X sailors from Mexico. Demita Vega De Lille and Mariana Aguilar each won gold and silver, respectively, and Megumi Komine of Japan got the bronze.

“I was doing a completely different race because this was my selection event for Tokyo,” explained De Lille. “I was carrying points from the national selection in Garda, so even if I was ahead for the entire week, I had a gap between the Mexican for the Games.

“Today, I was willing to sacrifice the first place as long as I could qualify. I had a perfect ending because I finished first and I’m going to Tokyo.”

First on tap this morning was the Women’s 470. Camille Lecointre and Aloise Retornaz of France continued their excellence on Biscayne Bay by winning their fifth race of the regatta to win the gold medal by a 13-point margin over Slovakia’s Tina Mrak and Veronika Macarol who took silver medal honors. Agnieszka Skrzypulec and Jolanta Ogar of Poland won the bronze medal.

The turning point in the race was on the second upwind, the French team made a big gain by heading right and finding some better breeze. That propelled them back up the pack.

“We had a great week, but not a great start today,” said Lecointre. “We started the race at the back of the fleet, stuck in a low gear. But we did not panic, but it was really intense. I feel we still have to improve a bit in light wind. Overall, we felt really good in the strong wind and in the shifty conditions. It was a hard week.”

Retornaz discussed their preparation before the regatta. “We sailed a lot outside in front of Key Biscayne to enjoy the waves, because it’s good practice for Japan where there will be a lot of waves.

“We had long hours on the water in Miami. We spent our winter in Vilamoura in Portugal to train. We are going back to Vilamoura to train a little bit before heading to Palma [Spain] for our World Championship and then the Trofeo Princesa Sofia.”

Carmen and Emma Cowles (USA) placed eighth as the highest finishing North American team. The Cowles qualified the United States for the Women’s 470 at the 2020 Olympic Games.

The competition at the top of the Men’s 470 was extremely close heading into the Medal Race. Australia’s Mat Belcher and Will Ryan were in first place, but even on points with Japan’s Keiju Okada and Jumpei Hokazono.

However, Jordi Xammar Hernandez and Nicolás Rodriguez Garcia-Paz of Spain propelled themselves up the leaderboard from fourth place and won the Medal Race to capture the gold medal.

The Spaniards finished even on points in the ultra-close standings with Okada and Hokazono, who took the silver medal. Belcher and Ryan earned bronze medal recognition. Only five points separated the top four teams in the final standings.

“Seven boats could win the event and we knew we had to do our best to be at the front at the beginning,” said Garcia-Paz.

Hernandez explained what is important for the team to focus on moving forward. “We have to stay in the boat because the Olympics are getting closer,” he said.

“There’s still a lot of work to do. Even though we won, we have a whole list of things to work on. We are very happy to win, but we’re not so happy on some aspects that we need to work on. We’ll keep on working and put the ticks next to every single piece of detail.”

On Friday, Caleb Paine of the United States won gold ahead of the Medal Race as he had a significant lead over Kyle Martin (CAN). Across the 10-race series, Paine collected five race wins and four seconds. Martin won the silver medal, while Paine’s American teammate, Luke Muller captured his second consecutive bronze medal at World Cup Miami.

“I just focused more on the sailing and not all of the stuff that surrounds it, the trials and all of the drama behind that and everything else that brings to the table,” said Paine. “I was really thinking about what makes the boat go fast and what gets it around the racecourse as quickly as possible.”

Mexico’s Juan Perez Soltero sealed the North American Tokyo 2020 Finn spot by besting the other contenders in the fleet this week. He was sixth overall and third in the Medal Race.

By Jake Fish – US Sailing