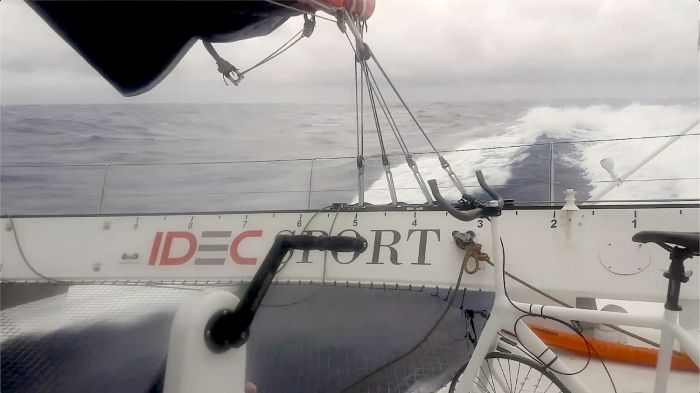 Over the past five days or so, the Indian Ocean has offered a series of contrasts to Francis Joyon and his crew of four aboard the IDEC SPORT maxi trimaran. While the boat which has won the Route du Rhum three times has maintained a record pace averaging 23 knots over the 5000 miles they have sailed out on the water, it has been an uncomfortable ride and that has been increasingly the case over the weekend, as they passed to the south of two very active low-pressure systems gradually moving to the east of Madagascar. Rain, reduced visibility, violent winds and a heavy swell from the north have shaken up the crew and punished the trimaran.

IDEC SPORT has managed to stay more than 600 miles ahead of the boat that holds the record for the Tea Route, the 70-foot trimaran, Maserati, which was very fast in this part of the course. There are still some huge difficulties ahead for Francis and his men, before they pass the Cape of Good Hope and return to the South Atlantic with a number of transition zones, involving a number of strategic gybes that they are going to have to deal with in extremely variable conditions with low pressure systems moving in from the West and some areas of high pressure.

“We are not at our full potential for the moment,” explained Francis Joyon this morning. “The seas are still rough and slowing us down and since yesterday we have been sailing with two reefs in the main after our mainsail halyard broke. The seas are still too heavy for us to work safely up the mast and we are going to wait until tomorrow morning for things to calm down. Unfortunately the wind is set to ease off in the coming hours and under reduced sail, it will affect our speed.” Joyon and his men are not however particularly worried. It has been nine days now since they left Hong Kong and they have a comfortable lead over the record of around the equivalent of a day’s sailing at the speed at which their rival Maserati was achieving at this point back in 2018.

At the Cape of Good Hope in five or six days

The Indian Ocean continues to show its wild side with active low-pressure systems and vast areas of high pressure in the far South. Joyon has to find his way through and gybe at the right moment as the approach the transition zone. The maxi trimaran is set to continue her route southwards for a few more hours as they wait for some NW’ly winds before gybing on seas that will finally start to calm down.

Joyon and his men are going to have to repeat that action several times before reaching the ever so tricky tip of South Africa and the Cape of Good Hope. They should be able to maintain their lead of a full day’s worth of sailing at a decent speed.